Please ensure Javascript is enabled for purposes of website accessibility
Free Article Join Over 1 Million Premium Members And Get More In-Depth Stock Guidance and Research
By Adam Levine-Weinberg - Nov 25, 2020 at 10:05AM

Off-price retail is recovering quickly from the COVID-19 pandemic, but one of the three industry heavyweights is benefiting from favorable geography.

Off-price retailers have grown their sales rapidly over the past decade, steadily gaining market share from pricier department stores and specialty stores. Nevertheless, they reported some of the retail industry's sharpest sales declines during the first half of fiscal 2020. After all, they do little or no e-commerce business, and their stores were forced to close during the spring due to coronavirus-related restrictions.

Sales almost back to breakeven

In the fiscal second quarter, Ross Stores' sales plunged by nearly a third. Yet this result wasn't as bad as it seemed. All of the company's stores were closed at the beginning of the quarter, and some didn't reopen until halfway through the period (or even later, in a few cases).

Back in August, Ross Stores CEO Barbara Rentler warned that comparable store sales had declined at a mid-teens rate in the first two and a half weeks of the third fiscal quarter. Sales trends improved significantly in September and October, though. For the full quarter, Ross reported a modest 3% comp sales decline, with total sales falling just over 2% year over year. Excluding a debt extinguishment charge, the company's net income was flat compared to the prior-year period.

Ross Stores' Q3 performance was slightly better than the 5% comp sales decline and 3% total sales drop that top rival TJX had reported a day earlier. That was impressive given that surging demand for home furnishings drove a 15% comp sales gain at TJX's HomeGoods unit. Comparable sales fell 10% at the T.J. Maxx and Marshalls chains, which are closer to Ross Dress for Less in their merchandise mix.

It's all about geography

Ross Stores should be applauded for its strong performance last quarter. However, its outperformance likely relates to geography more than anything else. The company's store base is heavily weighted toward the Sun Belt, where most people went back to their normal shopping habits relatively quickly.

Meanwhile, the Northeast has been the region slowest to reopen. Ross Stores has benefited from having no stores in New York or New England and a minimal presence in New Jersey.

By contrast, TJX and Burlington are both headquartered in the Northeast. More than a quarter of TJX's domestic stores are in the region. Burlington also has about a quarter of its stores in the Northeast. Limited exposure to the region where people are being most cautious about returning to in-store shopping may completely explain why Ross Stores achieved stronger sales results than its peers last quarter.

Solid stocks for the long term

All three off-price retailers have rewarded long-term investors handsomely. TJX stock has delivered a total return of 95% over the past five years, while Ross Stores stock has gained 131%. Burlington stock has been the best of the bunch, more than quintupling over that period as the company steadily improved its profitability. 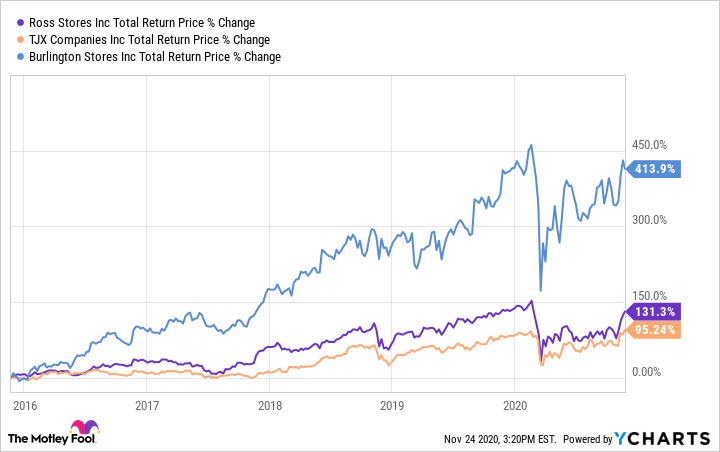 Investors probably can't expect the same level of returns over the next five years. For example, Ross Stores stock trades for about 25 times its fiscal 2019 earnings, which is higher than its P/E ratio was a few years ago. At that valuation, investors are pricing in not just a full recovery, but also a lot of future growth.

Nevertheless, Ross Stores should be able to deliver on investors' growth expectations. Management still sees plenty of room to grow in the company's mature markets while continuing to penetrate newer markets in the Midwest. Sooner or later, Ross Stores will expand to the Northeast, providing additional room for growth. The gains may not be as spectacular in the future as they were in the past, but shares of Ross Stores and its peers still offer plenty of upside for patient, long-term investors.