The energy sector has rebounded since Nov. 9, the day when positive vaccine news from Pfizer and BioNTech sent oil prices higher. However, even with that improvement, shares of Kinder Morgan (NYSE:KMI) and ExxonMobil (NYSE:XOM) are still down 33% and 47%, respectively, year to date.

Due to its still-punished share price, ExxonMobil now offers one of the highest dividend yields the company ever has at a whopping 9.4%. But Kinder Morgan -- even with a lesser yield -- is arguably the better buy right now. 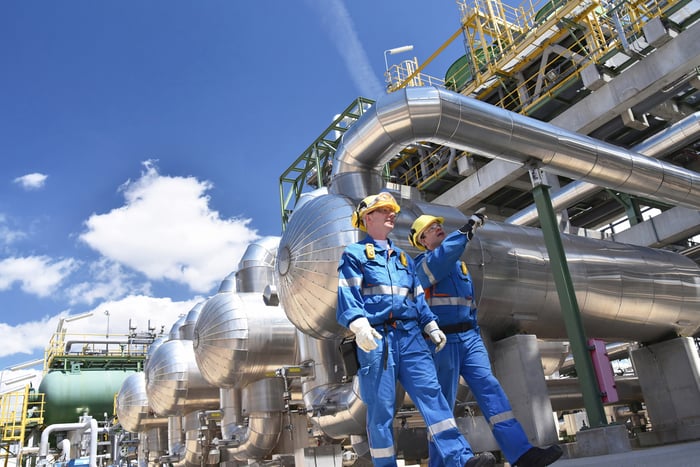 Although ExxonMobil did better in the third quarter than it did in the second, it's hard to ignore that the company lost $2.37 billion in the first nine months of 2020. Kinder Morgan reported a loss of $488 million during the first three quarters of the year, but an adjusted profit of $1.41 billion, just 10% less than in the same period of 2019.

Both companies could be in better shape, but Kinder Morgan's long-term contract model has helped it continue to generate strong free cash flow (FCF) during these challenging times. And Kinder Morgan's Q3 earnings report shows that the company is on track to use its extra cash to pay down debt and meet its 2020 revenue and earnings goals. 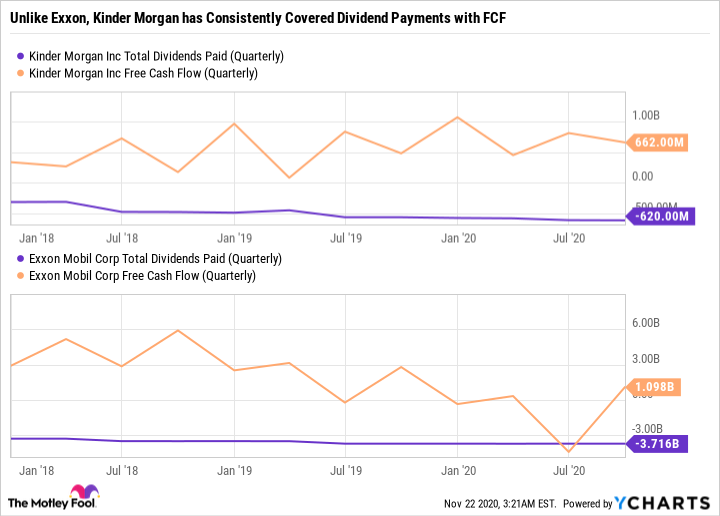 This is not entirely a pandemic-induced problem for ExxonMobil. The company reached the point where its FCF was no longer sufficient to cover its dividend in late 2018. After accounting for investing activities, ExxonMobil barely had enough FCF to cover its over $13.7 billion in dividend payments and other financing activities. The issue has persisted in 2020, the result of which has been a reliance on debt to make up the gap in covering its dividend obligations.

That reliance on debt has weakened ExxonMobil's balance sheet. Although the oil major is better positioned than some of its peers, its total net long-term debt position continues to rise whereas Kinder Morgan's has declined. 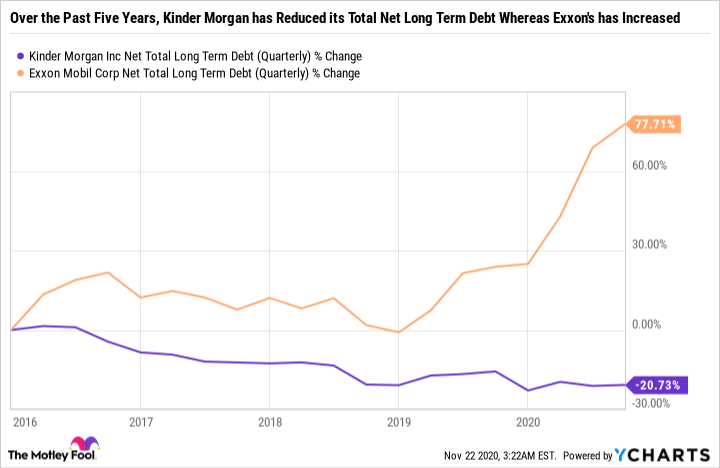 ExxonMobil now has the highest amount of net debt in its history. This is an even bigger concern considering its poor 2020 performance. However, it is less leveraged than Kinder Morgan, which has both a higher debt-to-capital and a higher financial-debt-to-equity ratio than ExxonMobil. Kinder Morgan's balance sheet isn't perfect, but its management deserves credit for reducing its net debt position over the past five years.

ExxonMobil simply isn't the blue chip stock it used to be. The company is struggling to operate in a lower oil price environment. Along with other companies in the oil and gas industry, it also faces many long-term headwinds regarding the sustainable use of those fuels for transportation, power generation, and industrial processes. Kinder Morgan faces similar headwinds, but its performance, free-cash-flow-supported dividend, and superior balance sheet put it in a better position right now.

Investors now have good reason to believe that the coronavirus vaccines that have been developed are effective enough to end this pandemic. And the expectation that demand for transportation fuels will increase when the pandemic ends is just one reason why crude oil prices could continue to surge. But speculations that oil prices may rise don't amount to an investment thesis that's solid enough to justify holding ExxonMobil for the long term. Investors would probably be better off settling for Kinder Morgan's slightly lower dividend yield on the basis that it's a better overall company right now.