Electric vehicle stocks have had a great year in 2020, despite a global pandemic that has hampered auto sales and dramatically lowered the number of miles people are driving. But none of that matters when investors are betting on these growth stocks.

Three of our Foolish contributors got together to lay out their most overvalued EV stocks right now, and it should be no surprise that Tesla (NASDAQ:TSLA), Workhorse Group (NASDAQ:WKHS), and Blink Charging (NASDAQ:BLNK) made the list. 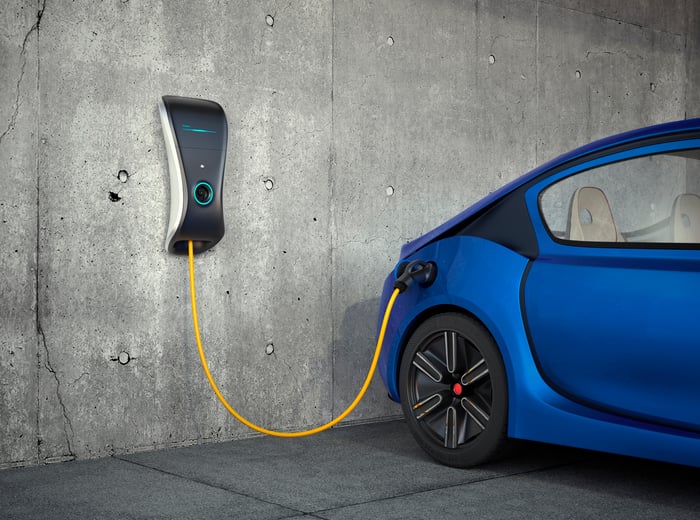 Travis Hoium (Tesla): There's a lot to admire about the auto company Tesla is building, but its stock is downright insane right now. Shares are up 680% in the last year, and this is now one of the most valuable companies in the world. This is despite expecting to ship only 500,000 vehicles in 2020, compared to General Motors (NYSE:GM) delivering 7.7 million last year and Toyota (NYSE:TM) delivering 10.7 million units.

In some ways, it makes sense that Tesla is more valuable than legacy automakers. It's growing faster, isn't bogged down by a dealer network, and generates higher margins. But the price-to-sale and price-to-earnings ratios you see below show that Tesla's valuation is insanely high compared to these companies. 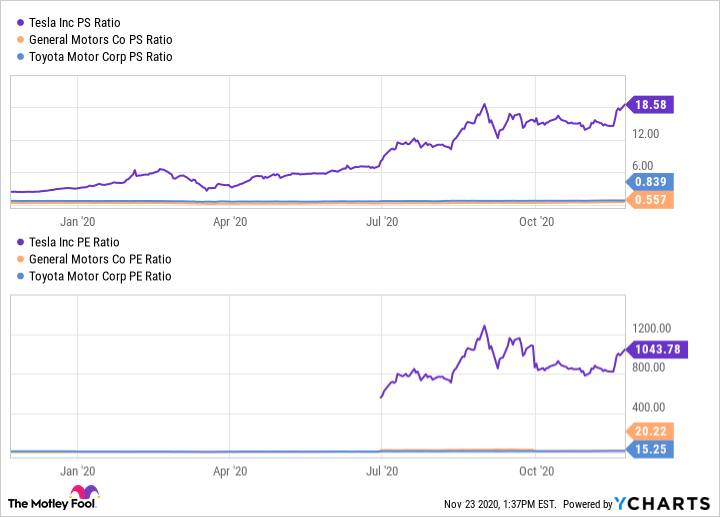 While legacy automakers are starting to launch more compelling electric vehicles, the biggest reason I would be worried about Tesla's stock is its self-driving business. Companies like Cruise (majority-owned by GM) and Waymo (owned by Alphabet) are already beginning to launch autonomous ride-sharing programs in the U.S., and ultimately that's a bigger disruption to transportation than electric vehicles were to ICE engines. And Tesla's autonomous technology is well behind Cruise, Waymo, and many others in the industry.

The excitement about Tesla's business is understandable. Customers are extremely loyal and love their vehicles. But I think disruption is coming to the auto business long before Tesla lives up to its current valuation, and that's why the stock has run too far, too fast.

Howard Smith (Workhorse Group): It's hard for an investor to get past emotion and to go against a wave of interest (and money) going into a new and exciting sector. Electric vehicles (EVs) is certainly one of those sectors right now.

Shares of Chinese EV makers have soared recently, as sales figures are showing strongly accelerating growth with projections for it to continue. NIO (NYSE:NIO), for example, just reported deliveries soared by 155% year over year in its third quarter, and predicted another 37% increase from there next quarter. Similar results came from its competitors XPeng (NYSE:XPEV) and Li Auto (NASDAQ:LI). Investors see the potential size of the Chinese EV market and have piled into those names in just the last month. 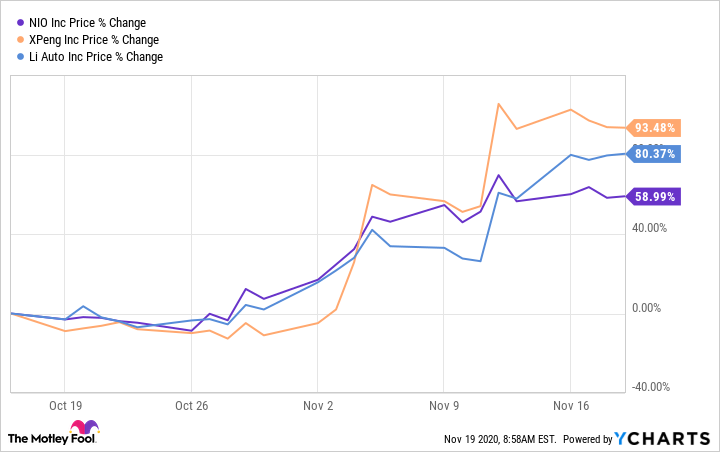 Several popular EV names in the U.S. aren't yet in production. One that actually does have a product and is on investors' radar is electric-delivery truck maker Workhorse Group.

Workhorse's niche is the "last mile" box truck for short-distance deliveries. Its two C-Series electric trucks offer 650- or 1000-cubic- foot cargo space, and have 100 miles of range. While there's a good reason for interest in this company, its 2021 production volume target is just 1,800 vehicles.

The company has also applied for Federal Aviation Administration (FAA) certification for its HorseFly unmanned drone "that can deliver parcels, carry sensors and cameras and operate autonomously with a high degree of precision."

Also piquing investor interest is whether the company could get even part of a $6 billion contract from the U.S. Postal Service. And the company also has a 10% interest in another EV upstart, Lordstown Motors (NASDAQ:RIDE).

So with all that potential, why not buy? Comparing its valuation against other EV makers that actually have sales -- including Tesla (NASDAQ:TSLA) -- tells the story. The price-to-sales of Workhorse Group is beyond even the wildest internet stock in its heyday. 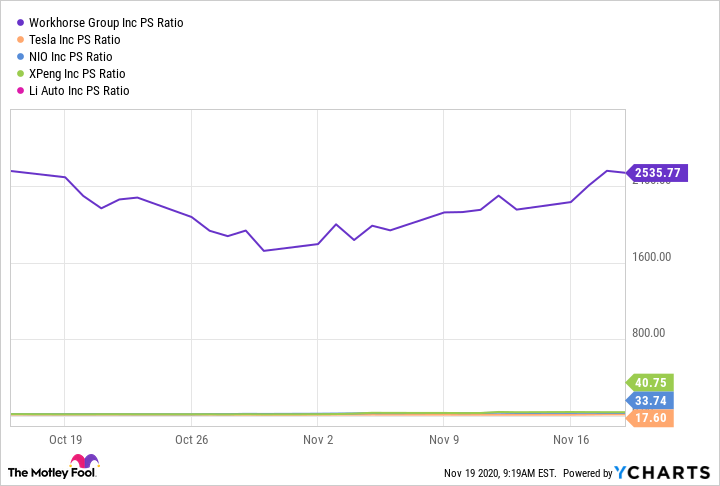 While there's reason to like Workhorse for its long-term potential, there are many hurdles, including potential competition, for it to be a successful business. Its valuation today looks well beyond what is reasonable, making it a prime candidate to retrench when investors focus their excitement elsewhere. I'm betting this one has run too far, too fast.

Jason Hall (Blink Charging): Shares of the EV charging system manufacturer are up almost 1,500% in 2020, and have gained more than 175% in November alone: 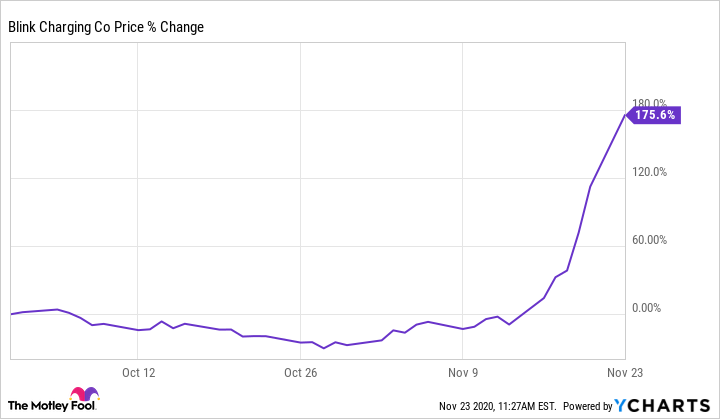 That's an incredible haul if you picked up shares of the micro-cap company earlier this year. The problem is, with a market cap now approaching $1 billion, the market is now paying an insanely high multiple for the company's future prospects. 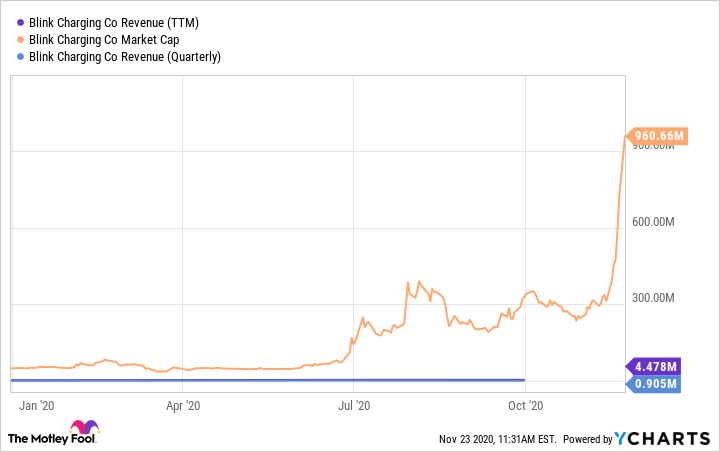 You read that right: Blink Charging did less than $1 million in revenue last quarter, and has generated not quite $4.5 million in sales over the past year. Moreover, it is burning cash at a very high rate, and doesn't exactly have a bunch of money on the books to continue the burn rate: 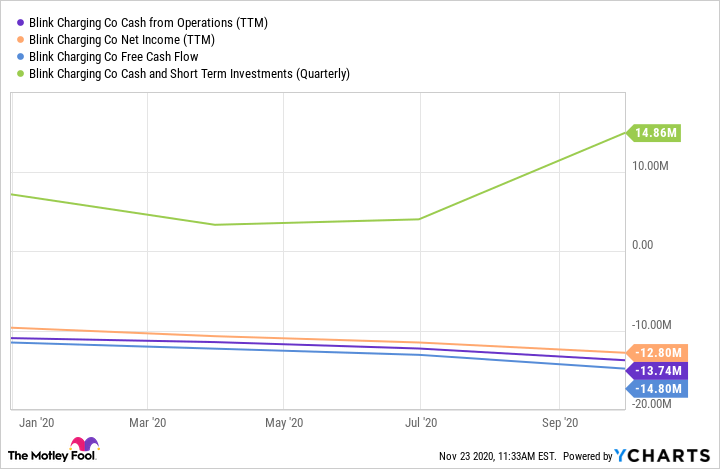 As the chart shows, Blink's cash burn rate is accelerating, meaning it will need to raise more cash, and probably relatively soon. With the stock price having raced higher, management would be smart to take advantage of this opportunity to raise cash with a secondary offering -- even with the downside for investors being dilution as a result. Frankly, Blink needs to be spending money to build out its business now.

But at almost 200 times sales, don't count me among the investors looking to buy shares of the company just yet. The business is just too small, and there's a lot of risk if it doesn't get a secure enough foothold in the EV charging business to deliver on the growth potential. Today's nearly billion-dollar valuation could run out of juice even more quickly than it charged up.

A hot industry has gone too far

The electric vehicle industry is growing, and there's a lot to like long-term. But the automotive industry isn't typically a very profitable industry, and there's a limit to how many vehicles people will buy in a year. That should put some trepidation into the market, and these three stocks could fall back to earth if the growth story is upset in any way.