Acquisitions can occur for different reasons. "Tuck-in" acquisitions are small deals that bolster an existing line of business. Deals to acquire a smaller business and leave it operating somewhat independently as its own business are often called "bolt-on" acquisitions. Some acquisitions are more transformational and are designed to jump straight into a leadership position in an industry where the acquiring company might lag.

Gilead Sciences (NASDAQ:GILD) has made deals of all kinds since Daniel O'Day took over as CEO in March 2019. Although each deal is structured differently, the progression may say something about the executive's increasing impatience to transform the company into a formidable player in the lucrative field of cancer-fighting drugs. During the company's year-end conference call in February, O'Day admitted feeling a sense of urgency to make a big deal as sales of legacy HIV and hepatitis drugs stall. The CEO has taken action, making multiple large investments, despite a global pandemic that has upended the healthcare industry. Investors should be asking if he may have been a little too eager. 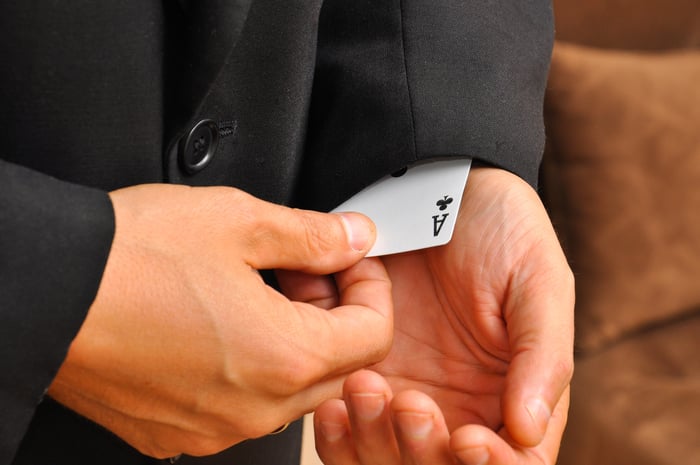 At one point, Gilead was the poster child for transformative acquisitions at lofty valuations that worked out for everyone. In November 2011, the company agreed to pay $11 billion for Pharmasset, a maker of treatments for hepatitis C without a single major drug on the market. The purchase price was an 89% premium to where shares of Pharmasset traded at the time. Although Gilead was developing hepatitis C drugs, the primary driver of sales and profits were its HIV combinations. When the deal was made, Gilead was the largest maker of HIV drugs, looking to bolster its hepatitis offerings.

After two years of development with Gilead, Pharmasset's hepatitis research and development led to Sovaldi -- a pill that cured hepatitis C in most patients when combined with other drugs. The drug, approved in late 2013, hit the market with a price tag of $84,000 for the 12-week course of treatment. Sovaldi and its subsequent derivatives for hepatitis C treatment have generated $61 billion in sales since being introduced. Despite the gaudy numbers overall, the company's 2019 sales of $22.5 billion were down 31% from the 2015 peak. Since taking over as CEO, O'Day has made a series of deals that are increasingly aggressive swings to hit another home run like Pharmasset.

In mid-2019, Gilead paid Galapagos (NASDAQ:GLPG) almost $4 billion plus $1.1 billion in equity for exclusive rights to its portfolio of compounds. The deal left Galapagos an independent company. CEO O'Day offered reasoning in the earnings call shortly after the deal, stating "innovation requires independence." In addition to future developments, Gilead gained rights to commercialize products outside of Europe. The three primary assets of interest were for idiopathic pulmonary fibrosis (IPF), osteoarthritis, and rheumatoid arthritis.

In March, O'Day acquired Forty-Seven -- a company using an experimental approach to turn off the signal tumors used to avoid the immune system -- for $4.9 billion. This acquisition bolstered a sagging cancer portfolio after the 2017 acquisition of Kite Pharma for $12 billion didn't work out as planned. That 2017 deal has been written down each subsequent year for a total of $1.62 billion.

In September, O'Day finally delivered the mega-deal analysts had been waiting for, paying $21 billion for Immunomedics (NASDAQ:IMMU). This purchase secured the drug Trodelvy, a drug approved for difficult to treat breast cancer. The drug is another weapon in the company's cancer arsenal and has potential for treating other solid tumors beyond breast cancer. Those additional applications will have to pan out to live up to the purchase price.

How things are shaping up

After the deal with Galapagos, O'Day pointed to the company's highly productive research and development and defended the deal structure. Apparently, the Forty-Seven team needed less independence as that company was purchased outright. In a sign that the purchase was more about acquiring an asset, the integration is being handled by O'Day himself, with the CEO of Forty-Seven, placing a priority on advancing the company's experimental drug, magrolimab. When discussing Immunomedics, O'Day talked of transforming the near and long-term growth story for Gilead. It's clear he sees Trodelvy as a lucrative treatment for many kinds of cancer tumors in the future, both alone and as a combination therapy.

The jury is still out on whether these deals will serve as catalysts for future growth or cautionary tales about a CEO who knows he needs to make a deal getting too aggressive. Of the three primary drugs in the Galapagos deal, two have reported results. The osteoarthritis drug failed a Phase 2 trial in early October and the rheumatoid arthritis drug trial was stopped at the end of October after toxicity concerns.

On the bright side, the Forty-Seven drug, magrolimab, gained breakthrough therapy designation from the U.S. Food and Drug Administration (FDA), indicating positive results and accelerating the regulatory timeline. While Immunomedics' Trodelvy was approved by the FDA in April, it continues trials around the world. Earlier this month, the first of 80 patients in China received the drug in a Phase 2 trial as the company looks to expand sales in Asia.

Like most biotechs, Gilead has a history of acquisitions. It just happens that one of the most successful acquisitions in biotech history propelled the company to billions in profits and has left it searching for new avenues for growth.

Time will tell if CEO Daniel O'Day's eagerness to make deals was poor capital allocation or well-timed buys. It's early, but the Galapagos deal seems like a bust at this point; however, the deal for Forty-Seven is showing promise. Either way, O'Day's legacy will be tied to Trodelvy and whether the company can expand its use beyond breast cancer to other solid tumors.

As with any company working to cure diseases, I'm rooting for them. As an investor, I believe there are better places to benefit from advances in cancer treatments than betting Gilead can turn things around with one very expensive acquisition.