The SPAC found a merger partner, and it's an interesting business.

Shares of Northern Genesis Acquisition ( NGA ) were trading higher on Monday after this special-purpose acquisition company (SPAC) announced that it will merge with the Lion Electric Company, a Canadian maker of battery-electric buses and trucks.

As of 3 p.m. EST, Northern Genesis's shares were up about 7.4% from Friday's closing price.

Founded and run by veterans of electric-utility and infrastructure companies, Northern Genesis Acquisition, like other SPACs, has no ongoing business of its own; it exists to acquire or merge with other businesses.

In this case, it's merging with Lion Electric, a small maker of electric buses and trucks. Based in Quebec, with additional offices in Sacramento, Lion has so far sold about 300 vehicles, mostly battery-electric school buses and mostly to school districts in the U.S. and Canada. 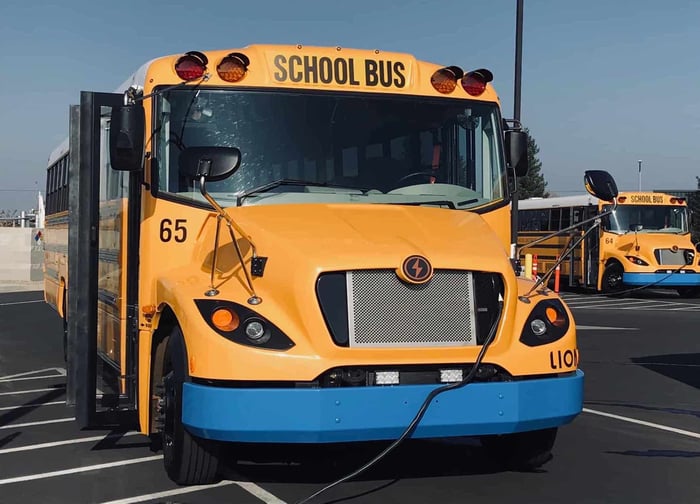 Lion Electric makes electric trucks and buses for urban use, including several versions of its electric school bus. There are about 300 in operation now, the company said. Image source: The Lion Electric Company.

This deal follows the broad outline of other SPAC deals we've seen in the electric-vehicle space in 2020. Northern Genesis is bringing about $320 million in cash to the transaction; outside investors will contribute another $200 million via a so-called PIPE (private investment of public equity); the merged company will have about $500 million in cash after fees and expenses, and will trade on the New York Stock Exchange under the ticker "LEV."

While we don't know yet whether the merged company will be a good investment -- we'll have to wait for the proxy statement to see financial details -- I can tell you that it's a real business, with real products, real customers, and a real market.

That may not be a lot, but it's more than we've seen from some of the other electric-vehicle SPAC deals in 2020.

The deal values the post-merger company, which will retain the Lion Electric name, at $1.9 billion. If all goes according to plan, the merger will close before the end of the first quarter of 2021. Lion Electric plans to use the cash to build a new factory in the U.S. and a new battery plant, and for research and development.

As I said above, I can't say yet whether this is a good investment. But I will say that for auto investors interested in the electric-vehicle space, this one seems worth watching. There's a real business here. Stay tuned.