Shares of embattled electric-truck start-up Nikola (NASDAQ:NKLA) were down again on Tuesday. A post-IPO lockup expired on Tuesday morning, allowing insiders to sell millions of shares -- and that added selling pressure to a stock that was already feeling the impact of a disappointing deal with General Motors (NYSE:GM) announced on Monday.

As of noon EST, Nikola's shares were down about 15.9% from Monday's closing price.

Insiders holding Nikola stock have been unable to sell since early June, when Nikola went public following its merger with a special-purpose acquisition company. For about 161 million shares that "lockup" period expired as of this morning -- and the selling pressure was heavy on Tuesday morning.

Adding to the drama, that 161 million shares includes about 96 million held by Nikola founder Trevor Milton, who left the company under a cloud in September amid allegations that he had misled investors about the state of the company's technology.

That alone might be enough to push Nikola's shares into the red on any other day. But there's another factor at work here: Nikola's long-awaited "partnership" deal with General Motors (NYSE:GM), announced yesterday, fell far short of what many investors had expected. 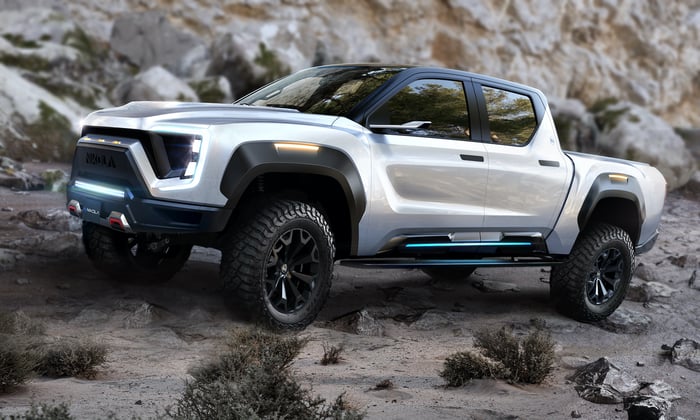 Nikola said on Monday that it will refund customer deposits for the Badger pickup, which it no longer plans to build. Image source: Nikola.

It's not a terrible deal in and of itself: GM agreed to sell fuel cells to Nikola and to provide some help integrating the units into Nikola's trucks. But back in September, Nikola and GM had announced a much more extensive deal in which GM would engineer and build Nikola's electric Badger pickup and supply batteries and fuel cells for the company's heavy trucks, while taking a $2 billion stake in the start-up.

That deal, like so many other things for Nikola, went by the wayside after short-seller Hindenburg Research accused the company of misleading auto investors.

In a new note on Tuesday morning, Deutsche Bank analyst Emmanuel Rosner said that he views the revised GM partnership as "particularly negative" for Nikola's shares. While it's good that Nikola has secured access to GM's fuel-cell technology, Rosner wrote, the scaled-back deal suggests that after additional due diligence, GM wasn't willing to take on the risk of an investment in Nikola by accepting its shares as payment.

I'm inclined to agree with Rosner. We know that GM isn't afraid to invest in electric-vehicle start-ups, as it has a stake in electric-pickup maker Lordstown Motors. But it clearly lost interest in holding Nikola equity after further due diligence, and that's not a good sign for the stock.