The popular Canadian marijuana players have always been investors' favorites: Aurora Cannabis (NASDAQ:ACB) and Canopy Growth (NASDAQ:CGC) grabbed all the attention after Canada legalized recreational pot in October of 2018. These companies ramped up their production with rising demand in 2019. However, things went haywire when external headwinds caused a supply-and-demand imbalance, and 2020 has been a difficult year for both.

U.S. cannabis companies, on the other hand, are shining amid the coronavirus pandemic. Marijuana was labeled as an essential item in the U.S., and demand rose during lockdowns. Illinois-based pot company Cresco Labs (OTC:CRLBF) saw some explosive revenue numbers in its recent third quarter ended Sept. 30. Besides higher revenue, many other factors make this marijuana stock a much better choice than Aurora Cannabis. Let's take a look. 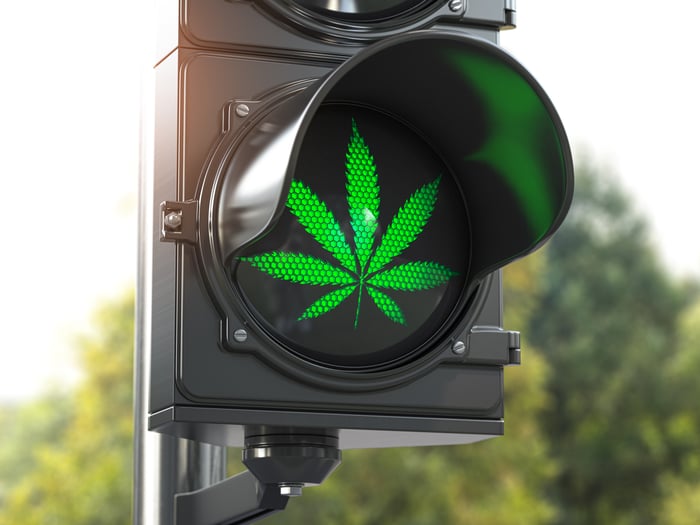 Cresco Labs serves the medical and recreational marijuana market under its brand names Cresco, Reserve, Remedi, Good News, and High Supply. It operates through two segments -- retail and wholesale. The retail segment includes its medical and adult-use products sold in the U.S., along with its nicotine vape products in Canada. In Q3, the wholesale segment contributed to 59% of total revenue while the retail space made up the remaining 41%.

Revenue grew a staggering 323% year over year from $36.2 million to $153.2 million in Q3. The wholesale segment jumped because of increased cultivation capacity in the key states of Illinois, Pennsylvania, and California. Retail revenue also saw an increase as sequential same-store sales grew. Two new stores in Illinois contributed to higher retail revenue as well.

The company's exceptional revenue growth helped it achieve another quarter of positive EBITDA (earnings before income, tax, depreciation, and amortization). Adjusted EBITDA rang in at a stunning $52 million, up from $11 million in the year-ago period.

Positive EBITDA also gives us an idea of how well a company is handling its operating expenses, which is one area where Aurora is struggling -- the company has yet to achieve positive EBITDA, and its costs keep piling up. That said, management does seem to be making efforts to reduce its SG&A (selling, general, and administrative) expenses. It will (hopefully) achieve its target of positive EBITDA by the second quarter of fiscal 2021. Meanwhile, Cresco is also working on reducing its SG&A to bring in profitability, with a sequential decline to 26% of total revenue in Q3 from 35% in Q2.

The outstanding numbers this quarter have also boosted Cresco's stock price. It's up 45% so far this year, while Aurora's stock has slumped 66%. Meanwhile, the industry benchmark, the Horizons Marijuana Life Sciences ETF, is down 7% over the same period. 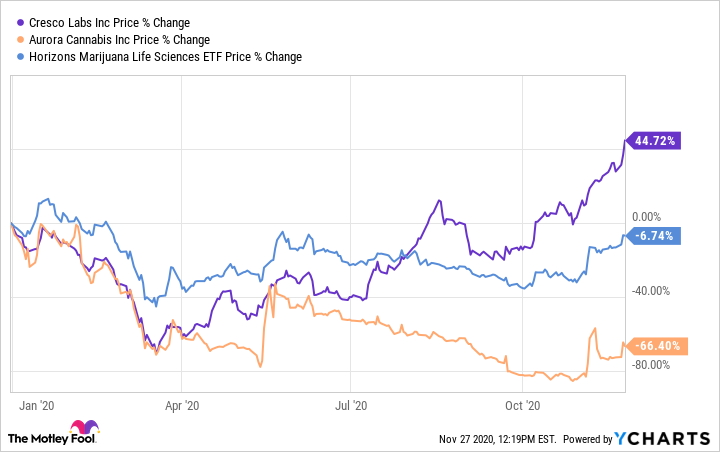 Cresco has a market presence in nine U.S. states, with 15 production facilities holding 29 retail licenses. After the recent elections, four more states were added to the legal recreational list, making the total 15 and the District of Columbia. Meanwhile, two more states made it to the medical list, for a total of 34 plus D.C. That means Cresco now has more opportunities for expansion with a good cash balance on hand. It ended the third quarter with $58 million of cash and cash equivalents and no debt.

Despite the new markets, management doesn't want to shift its focus from the key areas in which it's already seen success, and it plans to continue expanding in those places, too. On the Q3 earnings call, management said that California market sales could reach $7 billion by 2025, and the state could be a key driver for the company.

While investors are still waiting to hear some positive news from Aurora, it might be worth taking a look at better options -- such as, say, Cresco Labs. The company has been doing well even within a limited legal market in the U.S., where there appears to be no end to demand for marijuana. A recent Gallup poll showed 68% of Americans are in favor of marijuana legalization.

A green light for federal legalization is expected by 2022 -- which would mean a wider market for Cresco. With outstanding rising revenues, continued positive EBITDA, and a stable balance sheet, it won't be difficult for Cresco Labs to capture a large share of the growing U.S. cannabis market.