We place a lot of faith in the market to value stocks correctly in the long term, but if you've been investing long enough, you know that it sure can miss the mark once in a while. On Monday, AstraZeneca (NASDAQ:AZN) announced that its coronavirus vaccine candidate, AZD1222, proved to be effective at preventing infection. Shortly after the announcement, its stock sank, while the rest of the market and major competitors like Moderna rose.

It's true that there are a few questions that need to be answered regarding AZD1222's effectiveness and its dosing protocol in particular. But I'm of the opinion that the lower sales price and significantly higher ease of transportation and storage will help AstraZeneca's vaccine outsell the competition. Let's dig into the details and identify why. 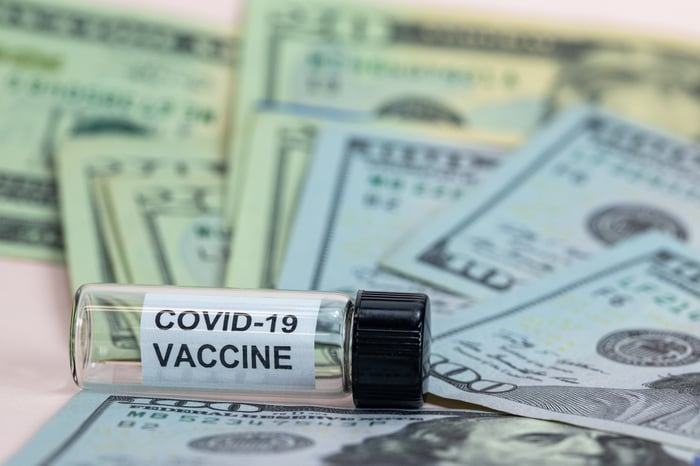 The market's confusion is understandable

After the announcement on Monday, the elephant in the room with AstraZeneca's vaccine is efficacy. Clinical trials investigated the effectiveness of two different dosing regimens. One regimen used a full dose of the vaccine initially, then another full dose after a month. Only 62% of the people in this group were protected against infection. The other used a half-size dose at the start, then a full-size dose later, which protected 90% of the participants. There's undeniably a big difference in effectiveness between the two, and so far management has declined to speculate on what that means and why it's the case.

The answer may stem from the modified adenovirus that AstraZeneca uses as a vehicle for its vaccine's payload. As many people have existing immunity to adenoviruses, which can cause the common cold, their immune system may mount a response to it rather than the anti-coronaviral payload. So, a smaller first dose of the vaccine could dampen this effect, thereby priming the immune system against the coronavirus more effectively. But the whole story is still unclear, so be sure to watch AstraZeneca's follow-up reports carefully.

Assuming that these results hold up to further scrutiny in the clinic, it's still good news. If the full course of inoculation requires a smaller dose than originally planned, manufacturing costs will be lower than expected. Importantly, AZD1222 is already slated to be the least expensive coronavirus vaccine at about $3 per dose. This is a stark contrast to competitors like Moderna, which aims to charge about $25 per dose, amounting to $50 for a full course.

Protection at a bargain

So, why did Moderna's stock get a bump when AstraZeneca reported interim results? The most obvious reason is that its candidate claims to be 95% effective against infection, whereas AstraZeneca's only reaches 90% even when using the better of the two dosing regimens. Plus, if you take the average of the results from both regimens, you end up with an efficacy of only 70%, which paints a much less flattering picture. Few people would want to take a mediocre vaccine if they knew about a highly protective one. However, it's important to remember that the U.S. Food and Drug Administration's requirements for coronavirus vaccines specify that an efficacy of 50% is the minimum to get regulatory approval.

Here is the crux of what the market got wrong: The vaccine won't be administered using the less effective regimen, nor will it be administered as an average of the two. Even under the accelerated development timeline of the pandemic, regulators aren't about to approve a dosing strategy that hasn't been proven safe and effective in large clinical trials. In other words, the candidate will be used in the conditions that are known to maximize its safety and efficacy. People can count on the candidate to be about 90% effective until there is new evidence stating otherwise.

With AZD1222 costing less than $5, the small edge in efficacy held by Moderna looks quite pricey. Especially as AstraZeneca releases more data and allows for a deeper analysis of its clinical trials, the market will recognize that its low cost will be a major boon for the company's market share. When paired with other advantages like stable storage in refrigerators rather than freezers, it's hard to see how other candidates will compete.

Eventually the market will recognize the real value of the vaccine, but it might take some time. Likely catalysts include additional data releases that document the clinical trial's final results (rather than interim analyses). These will likely be delayed now that there is a discrepancy in the efficacy of the two dosing regimens which requires clarification. Further out, earnings reports are another opportunity for investors to see the impact of its sales. In the meantime, it might be a good idea to buy. Especially as a volatile market continues to miss key details, investors shouldn't be afraid to take a stand behind facts.