The COVID-19 pandemic has had a devastating impact on many businesses. Department stores have been among the biggest losers due to their focus on selling apparel and continued reliance on in-store sales, often in malls.

One U.S. department store chain has actually improved its earnings year over year for two consecutive quarters, however: Dillard's (NYSE:DDS). Nevertheless, Dillard's stock ended November down 36% year to date. As the retail industry recovers in 2021, this department store stock could surge to a multiyear high. 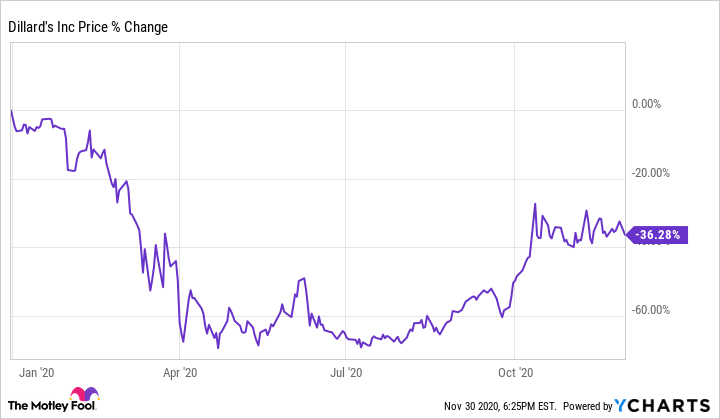 This tight inventory management has allowed Dillard's to cut back on clearance discounts despite having unusually low traffic in its stores. In the second quarter, retail gross margin increased by 2.4 percentage points year over year despite a 35% drop in retail sales. Dillard's third-quarter performance was similar: retail sales fell 25%, but retail gross margin improved by 2.1 percentage points year over year.

These gross margin increases -- along with big expense reductions -- enabled Dillard's to improve its profitability significantly on a year-over-year basis in the second quarter. Profit grew again last quarter, although it was roughly flat compared to Q3 2019 on a pre-tax basis. These were impressive results considering the top-line pressure Dillard's has experienced. With equal attention to inventory management, the retailer could potentially surpass its 2019 earnings even if revenue never fully recovers to pre-pandemic levels.

Dillard's is a cash cow -- and spends that cash predictably 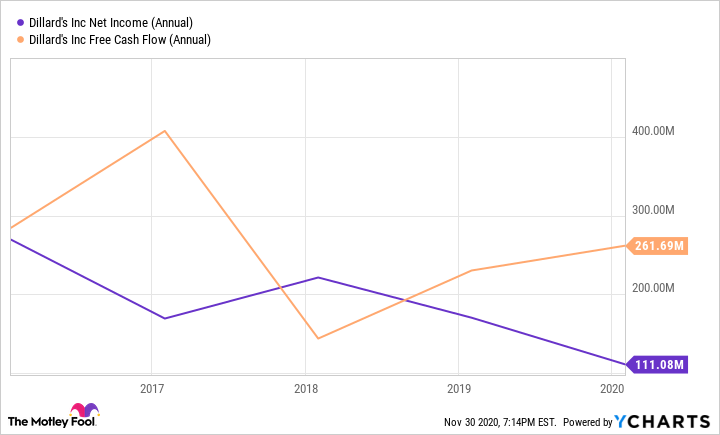 There's a simple reason for this discrepancy: Dillard's manages capital spending tightly. Noncash depreciation and amortization expense has been running at around $220 million annually recently, but even before the pandemic, Dillard's was spending just $100 million to $150 million a year on capex. This cautious attitude toward capex is wise given that the department store industry is declining. Other department store chains that have invested more aggressively in their businesses have gotten poor returns from those investments. As a result, their shares have underperformed Dillard's stock over the past decade.

In recent years, Dillard's has usually generated about $250 million of free cash flow annually. Its quarterly dividend of $0.15 per share will cost it a mere $14 million this year. That leaves the vast majority of its cash flow available for debt reduction and share buybacks.

Between fiscal 2016 and fiscal 2019, Dillard's paid down $257 million of debt and spent $724 million on buybacks. It has a very clean balance sheet today, having ended Q3 with just $581 million of debt. As a result, investors can expect the company to continue devoting the majority of its free cash flow to buybacks. Dillard's market cap is just over $1 billion. With profitability having equaled or exceeded 2019 levels in each of the last two quarters despite weak sales and vaccines on the way, it's quite possible that free cash flow will rebound to $250 million or more in fiscal 2021. That would enable Dillard's to shrink its share count rapidly, potentially triggering a short squeeze that could send the stock soaring.

A retailer or a real estate company?

Many investors may be skeptical of buying a department store stock, no matter how strong its cash flow. Dillard's business has been in decline for several years. What happens if the pace of decline accelerates? Fortunately, Dillard's offers investors an added margin of safety because of its massive real estate holdings.

As of the end of October, Dillard's liabilities totaled less than $2 billion. Meanwhile, the company had over $1.8 billion of current assets (mostly inventory): enough to settle virtually all of its liabilities. In effect, shareholders own Dillard's real estate virtually free and clear. These real estate holdings total 43.7 million square feet of owned store space (and thousands of acres of associated land), along with 3.9 million square feet of office, distribution, and storage space.

Dillard's store real estate includes quite a few locations in valuable A-grade malls. But even if most of its stores aren't very valuable for retail use, many could be repurposed as last-mile fulfillment centers, medical offices, or numerous other purposes. Others could be torn down and the land sold to multifamily developers. At a very modest average valuation of just $50 per square foot, Dillard's real estate portfolio would be worth nearly $2.4 billion -- more than double the company's current market cap.

No stock is a sure thing. Between Dillard's surprisingly good Q2 and Q3 results, its history of strong cash flow, and its massive real estate holdings, though, the odds are stacked in favor of this department store stock.