It's December, just a few weeks before Christmas. For a toymaker like Hasbro (NASDAQ:HAS), this should be "the most wonderful time of the year." Except today, it isn't. Hasbro shares crashed more than 5% earlier this morning, and remain down 2.1% as of 12:50 p.m. EST.

And you can blame investment banker BMO Capital for that. 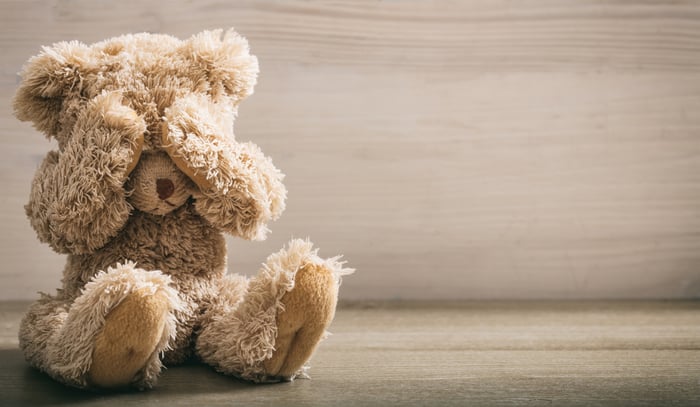 In a note out just this morning, you see, BMO Capital downgraded Hasbro stock from outperform to market perform.

Hasbro's toy business "has benefited from generally strong toy sales this holiday season," notes BMO. But while this is what BMO had been predicting, and while the analyst retains a "positive outlook" on the stock (reports StreetInsider.com), the plain truth of the matter is that Hasbro's stock price has already moved past BMO's posited $90 target price for it. Accordingly, the analyst has determined that Hasbro shares are "fairly valued," and there is no compelling reason to buy more.

I don't disagree. At a recent valuation of more than 34 times trailing earnings, Hasbro stock costs far more than I would ordinarily want to pay for a stock that, according to most analysts, is only expected to grow earnings at about a 10% annual pace over the next five years.

Is Hasbro arguably cheaper than meets the eye, so as to justify its apparently rich valuation? Yes and no. On one hand, Hasbro's free cash flow numbers are superb: $623 million in cash profits generated over the past year, versus just $385 million in profit according to generally accepted accounting principles (GAAP). On the other hand though, Hasbro carries a heaping helping of debt as well -- $4.3 billion net of cash on hand.

Factor all of this into the mix, and I get an enterprise value-to-free cash flow ratio of 28 for Hasbro stock, which is still far too high for a 10% grower. Far from buying Hasbro stock at its current price, I think I'd be more inclined to sell.