They're anything but sexy growth companies. In fact, some investors view the market's oldest and best-established dividend payers as downright boring.

The fact of the matter is, however, that Dividend Aristocrats -- businesses that have increased their payouts for 25 consecutive years or more -- are great retirement holdings for a variety of reasons. Three stand out above the rest. 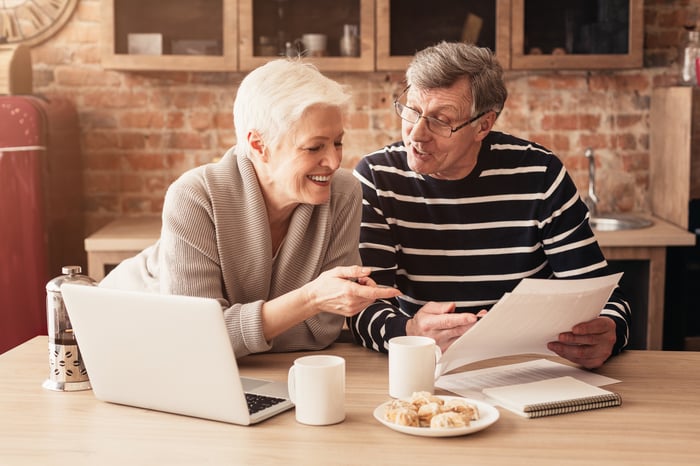 1. Dividend payouts tend to increase in step with inflation (at least)

High dividend yields can be enticing to investors -- but how long will a yield be "high"? If the dollar figure being dished out doesn't grow over time, inflation will steadily diminish a payout's value. That can be a particular problem for retired folks hoping to use their dividend income to pay their ever-rising bills.

Dividend Aristocrats have a track record of addressing this problem. Their payouts have grown reliably every year, and the companies have a vested interest in keeping their streaks going. In most cases, their payouts have outpaced the nation's typical inflation rate of around 3%. The average Dividend Aristocrat's payout has improved by more than 7% annually for the past five years.

Take Procter & Gamble (NYSE:PG). Its quarterly dividend has grown from $0.0496 per share in 1989 to $0.79 now. That's a compound annual growth rate of a little over 9% per year, easily topping the inflation rate.

2. Income is reliable even as other companies stop paying

There are few investment-related events more disappointing than when a stock you bought and held as an income generator suddenly stops paying its dividend. It happens though. Several dozen S&P 500 companies have cut their payouts this year due to the challenging economic environment created by the COVID-19 pandemic. These former stalwarts include well-known companies like Wells Fargo, Walt Disney, and General Motors. So far though, no Dividend Aristocrats have done so, though one -- ExxonMobil -- failed to increase its payout in 2020.

This may ultimately be a reflection of an often-overlooked nuance of those particular stocks. Managers of most Dividend Aristocrats leave themselves plenty of financial wiggle room to maintain their payouts when things turn fiscally tough. While the individual numbers vary widely from one company to the next, the typical Dividend Aristocrat's dividend payout ratio rarely exceeds 60% to 80% for long periods of time, depending on the condition of the economy. That leaves a decent-sized cushion for the occasional rough patch.

3. Investors' principal can grow while they collect dividends

Finally, though income investors may not primarily purchase dividend stocks for their share price appreciation potential, these stocks can, of course, rise in value. In fact, as a group, those companies that dish out the most reliable (and reliably growing) dividends also tend to produce above-average share price gains.

Take Dividend Aristocrat Lowe's (NYSE:LOW) as an example. Over the course of the past 10 years, the home improvement retailer has grown its quarterly payout from to $0.11 per share to $0.60. During this same period though, its shares have soared from $26 to their current value of $155. A shareholder who had steadily reinvested their dividends over that period would have banked a little more than a 700% return on their investment, but even those who didn't would still be up by nearly 600%.

Granted, that's a rather extreme degree of capital appreciation from a solid dividend payer. This type of growth-and-income combo story is hardly unusual, however. Recent numbers from Ned Davis Research affirm stocks of companies that make a point of starting and/or raising their dividends -- like the Dividend Aristocrats -- consistently outperform the S&P 500. Moreover, the companies that don't consume the bulk of their profits in making dividend payments -- again like the Dividend Aristocrats -- also generally outperform the broad market. The most interesting part of this Ned Davis Research data? For nearly the past 50 years, S&P 500 companies with policies that call for consistent dividend growth have averaged returns that top non-dividend paying stocks' returns by more than 7 percentage points per year.

None of this is to suggest the entirety of your retirement portfolio should consist of Dividend Aristocrats. But that wouldn't necessarily be a strategic misstep either. There's a lot to be said for reliable income growth... and the rewards go beyond the actual income. The market has historically rewarded quality names that are consistently capable of upping their quarterly payouts.