Saying Disney (NYSE:DIS) has had a hard year is a huge understatement. Revenue bottomed out at a 42% decline in the third quarter of fiscal 2020, and the entertainment king is still missing sales from parks and experiences.

But the holidays are approaching, and the company is hoping to rack up sales while customers are spending. Should you buy shares of the blue chip stock now?

The case to buy

The Walt Disney Company doesn't really need an introduction. It's the leading U.S. entertainment company, with global theme parks and film studios that produced seven of the highest-grossing films in 2019. That's almost enough to interest investors right there. 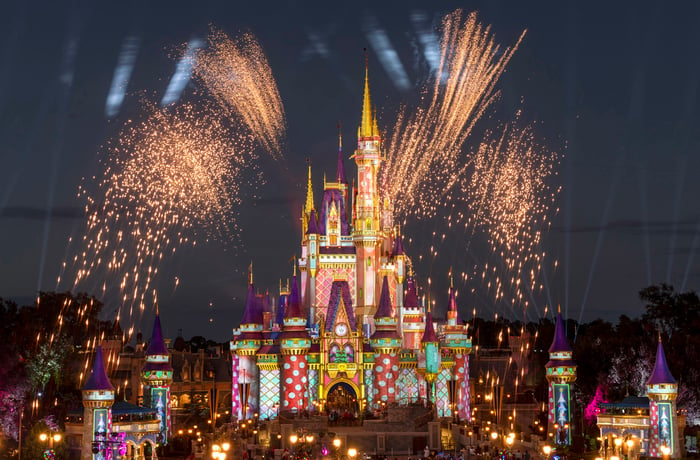 Some of the company's many theme parks and experiences, such as resorts and cruises, have started to reopen with limited capacity. Once they resume normal operations, attendance and sales should rise accordingly. CEO Bob Chapek said that demand is "very, very strong" for cruise vacations.

The company's best hope right now is Disney+, its subscription streaming site. In the one year since its launch in some markets, subscriptions have grown to 73 million. The pandemic definitely helped it along, since people weren't going to theaters, but it's here to stay. Disney also owns Hulu, a general content streaming service, and ESPN+, a premium sports site, as well as global sites. The company's streaming services have 120 million total paid subscriptions as of the end of the fourth quarter, and direct-to-consumer revenue increased 41% That's in addition to several television networks and talent teams that produce content for the various channels. And Disney is strategically organizing its content producers with the right distribution channels to make the most of both.

Another note of progress is advertising revenue, which suffered in the third quarter, but increased 12% in the fourth quarter.

Between the company's parks, films, products, and networks, Disney will end up being a solid investment, even though it's struggling now.

The case to wait

The company was growing fast before the pandemic, with a 36% revenue increase in the 2019 first and even a 21% increase in the second quarter, which included about two weeks of lockdowns.

But trouble started in the third quarter, which included most of Disney's park closures, and there's only been a small improvement as parks continue to face closures and capacity limits. There have also been delays in film production. Chapek said that film sales in the 2021 first quarter will be significantly less than the blockbuster 2020 first quarter, which featured the last film in the Star Wars franchise and Frozen II. And even though he also said that the future of the company is Disney+, there are still high marketing costs associated with the launch, pressuring profitability. And with the huge surge in early subscriptions, can investors really expect the growth rate to continue?

So while there has been some improvement in Disney's revenue, things are not likely to get better for a while.

Disney is a great company that's temporarily grappling with pandemic fallout. But it has tremendous potential ahead. The company is showing sequential improvement, and its share price will likely rise. The real question is when. Chapek said, "We now do see some light at the end of the tunnel." If restrictions ease and parks open, and Disney outperforms during the holidays, investor confidence will push its stock price higher. I would buy and lock in the decreased price now. It may be the last time to buy shares on sale.