Shares of Chinese electric-vehicle makers NIO (NYSE:NIO) and XPeng (NYSE:XPEV) were trading lower on Thursday, after a Wall Street analyst cut his bank's rating on XPeng following its recent rally.

In a note released after the U.S. markets closed on Wednesday, UBS analyst Paul Gong cut his bank's rating on XPeng to neutral, from buy, while raising its price target to $59 from $25.

Gong wrote that while he believes XPeng is leading China's race to self-driving vehicles, he thinks that "investors more or less already recognize this" after the stock's recent 200%-plus rally. Gong noted that peers including NIO have also made recent progress toward autonomous driving, but he said that he thinks XPeng remains the group's leader on that front. 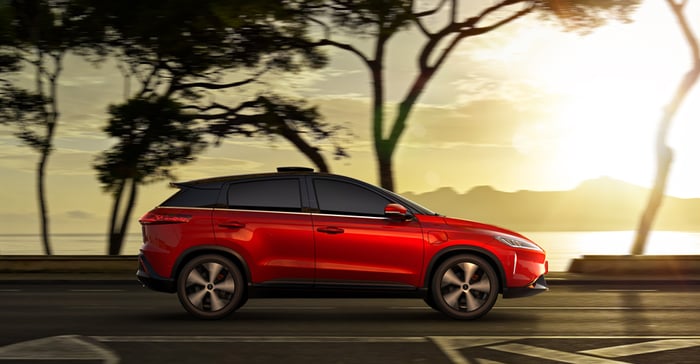 Long story short: Gong thinks XPeng is more or less fully valued, and that's why the stock is down today. And what about NIO?

Gong has been more of a skeptic on NIO -- in fact, he was an outright bear earlier in 2020. The analyst had something of a change of heart in August, raising his rating to neutral from sell after NIO's sales recovered and its gross margin improved in the second quarter.

But I think that Gong's note on XPeng might have had a sobering effect on auto investors holding NIO's stock as well, if only by reminding them that both of these companies' stocks have had very big run-ups since the spring.