When it comes to investing in the marijuana sector, popular players like Aurora Cannabis (NASDAQ:ACB) and Canopy Growth (NASDAQ:CGC) come to mind. Smaller players like Tilray (NASDAQ:TLRY) often get overlooked. Technically, Tilray isn't a smaller company -- its market cap of $1.1 billion is just slightly less than that of Aurora's cap of $1.9 billion. However, Aurora has stolen investors' attention mostly because of its acquisition spree and expansion pace, and Canopy's investors are keeping a close watch on the company to see if it can appropriately implement cost-cutting measures. Aurora and Canopy focus on both medical and recreational cannabis products.

Tilray, on the other hand, has put more of its interest in medical cannabis products, especially in the European market. In its recent third quarter, which ended Sept. 30, the company saw a decline in total cannabis revenue, but international medical sales were up. Let's take a look at its Q3 results in depth and determine if this cannabis stock is worth investing in. 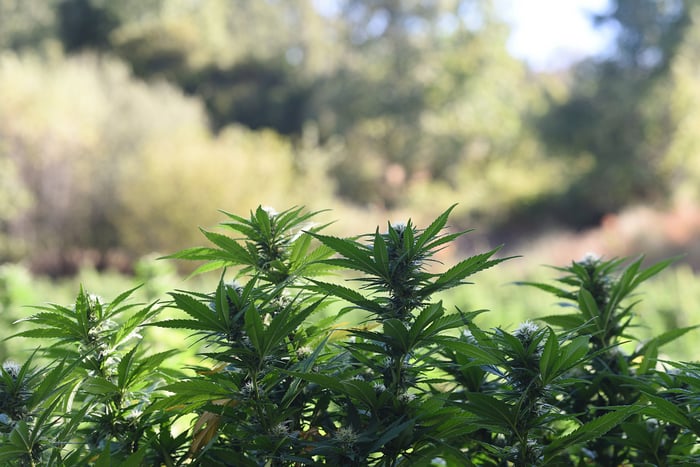 Total cannabis revenue saw a dip of 11.3% year over year to CA$31.4 million because of the discontinuation of bulk sales, according to the company.

Medical cannabis products are its strength

Tilray's medical cannabis business is not just experiencing growth but also is gaining international expert recognition -- which is evident from the recent positive reviews it received for its products used in a clinical study. In September, the company announced that Australian researchers published preliminary results from a clinical trial that used the company's medical cannabis product. The results published in Annals of Oncology, a peer-reviewed journal, showed that Tilray's product reduced "nausea and vomiting for cancer patients undergoing chemotherapy in a world's first clinical trial."

Tilray also has a cultivation license from the Government of Portugal to produce medical marijuana products for the EU market. Through its Portugal facility, Tilray plans to export its products to the Israel market along with a partnership with Cannadoc, an Israel Medical Cannabis Agency. Both entered into a strategic partnership agreement in January. Unlike Canada, which is more challenged by the black market, Israel can be a surer opportunity for Tilray. Because of stricter border controls, the Israeli cannabis market is better protected from the illicit market.

Besides Australia, Canada, and the EU, its products also have a market presence in Latin America and New Zealand. In total, Tilray now exports medical marijuana products to 15 countries worldwide.

Tilray is wise to concentrate more on the medical cannabis market, particularly in Europe. With regulations improving, the European Cannabis Market could grow at a compound annual growth rate (CAGR) of 29.6% to be worth $37 billion by 2027.

Unlike Aurora, which saw an 8% year-over-year decline in revenue in its first-quarter fiscal 2021, Tilray's revenue didn't decline this quarter. However, the revenue growth wasn't sufficient for the company to break even. It reported an adjusted earnings before income, tax, depreciation, and amortization (EBITDA) loss of CA$1.5 million. However, this was better compared to losses of CA$36.4 million in the year-ago period. The company said cost-cutting efforts have helped it achieve that. In May, it shut down one of its cultivation facilities in Ontario, Canada. Management stated it would help save CA$7.5 million in annualized net savings that could boost revenues and help them achieve profitability.

The company ended the quarter with cash and cash equivalents of CA$155.2 million that could help with the launch of more derivatives products. In October, Tilray along with its wholly owned subsidiary, High Park Holdings, launched a new line of cannabis-infused edibles. Management is highly optimistic that the company will either break even or achieve positive EBITDA by the fourth quarter. This cannot be possible just by reducing costs; Tilray needs to work on growing revenues too.

Management believes the company has a "competitive position and business potential in the EU and Germany" medical markets. For this reason, they feel their Portuguese facility will position them better to capture these markets. The Portugal cultivation facility, once completed, could cultivate roughly 40 metric tons of dried cannabis, according to management.

Tilray's strategies for the future sound promising, but until the strategies bear fruit, Tilray is still a risky investment. Its lukewarm third-quarter results didn't help its stock, either, which is down a whopping 50% so far this year. Aurora Cannabis' stock is riding the same boat with a slump of 60%, while Canopy's stock is up 37%, respectively. Meanwhile, the industry benchmark, the Horizons Marijuana Life Sciences ETF, is down 0.57% over the same period. 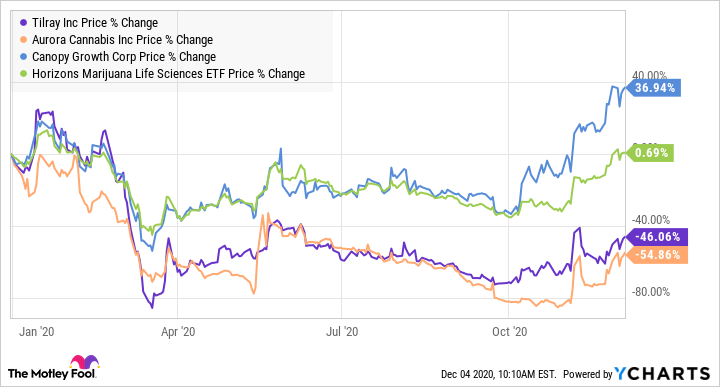 Tilray's expansion plans in Europe and the international medical cannabis market can benefit its revenues, but that could take a while, Thus, until Tilray increases revenue at a faster pace and achieves profitability, I would be cautious before investing in this marijuana stock.