Ford Motor Company (NYSE:F) disappointed some fans and investors when it said last week that its all-new Bronco will be delayed until next summer because of a COVID-related supplier problem. But the company said that its most important new-product launch -- the all-new 2021 F-150 -- is still on schedule, and early demand is strong as the first trucks arrive at its U.S. dealers.

Ford said dealers are "raving" about the new truck's tech, as orders surge

Ford's U.S. sales chief Mark LaNeve told me that early orders for the new F-150 have been high, with a big increase in the number of customers choosing to special order their new trucks. LaNeve said that dealers and early customers are drawn to the changes that Ford has made to the pickup's interior. "Dealers are raving about the technology in the interior," LaNeve said, noting that the new truck has a large touchscreen, a fold-down desk to accommodate a laptop computer, and an on-board modem that will allow over-the-air updates to the truck's software. 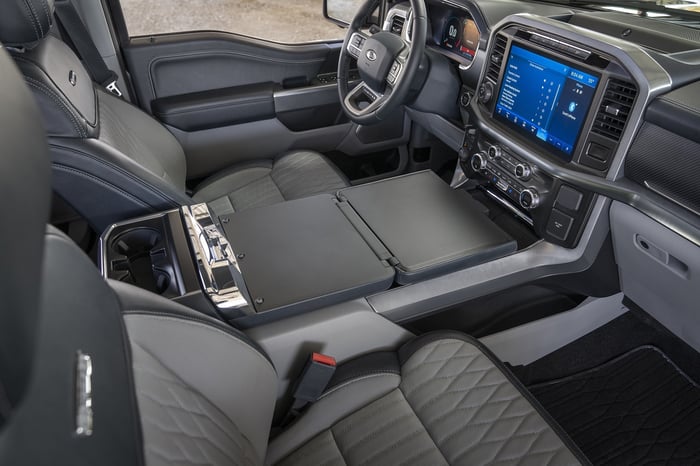 The 2021 F-150's interior has several new features including a large touchscreen and a surface for a laptop. Image source: Ford Motor Company.

Ford builds the F-150 at two plants -- one in Dearborn, Michigan and the other near Kansas City, Missouri. Both factories were shut down for several weeks earlier in the fall to install the new tooling required to build the 2021 F-150s. Both are now back up and running and began shipping the new F-150s in late November, but inventories of pickups at Ford's dealers remain tight.

Ford had about 59 days' worth of F-Series trucks on dealer lots as of Dec. 1, according to data from Automotive News. That's low: Ford, like its Detroit rivals, aims to have about 90 days' worth of pickups in inventory at its dealers.

Despite COVID-19, Ford's truck sales are still on track for a good year

Despite the pre-launch shutdowns and the 10-week shutdown of all of Ford's North American factories earlier this year amid the coronavirus pandemic, Ford's trucks have had a good year, under the circumstances. While sales of the F-Series truck lineup were down about 12% this year through November, LaNeve said that the F-Series is on track to once again be America's bestseller in 2020 -- for the 39th year in a row.

That streak could well extend into 2021. LaNeve said that dealers requested more than double the number of trucks that Ford could build in the first month of production.

For auto investors holding Ford's stock, this is welcome news. While 2020 has been an expensive year for Ford (and many of its rivals), these good truck sales -- in a period when incentives have been relatively low -- have helped to offset some of the impact of the factory shutdowns and weak economy on Ford's bottom line.