Target (NYSE:TGT) has been one of the best stories in retail in recent years. The stock has tripled over the last three years, and business has rocked during the coronavirus pandemic with comparable sales and profits soaring. Even with those strong gains, one particular component of Target's business has been consistently overlooked.

Three years ago, Target acquired Shipt, the Instacart rival, to boost its e-commerce capabilities, and that decision along with a number of other investments, including raising wages and investing $7 billion into stores and digital capacity, have helped the stock deliver a breakout performance since then.

Still, Shipt, a premium same-day delivery service for groceries and other household items , has received little attention from the financial media. Target, a broad-based retailer, regularly touts its same-day fulfillment services, which include Shipt. But much of the focus is on store-based pickup options like Drive Up.  Nonetheless, Shipt has been a big winner for Target during the pandemic, experiencing 280% growth in the third quarter to $200 million in sales in the quarter, and looks primed to deliver strong growth in the holiday season as well. 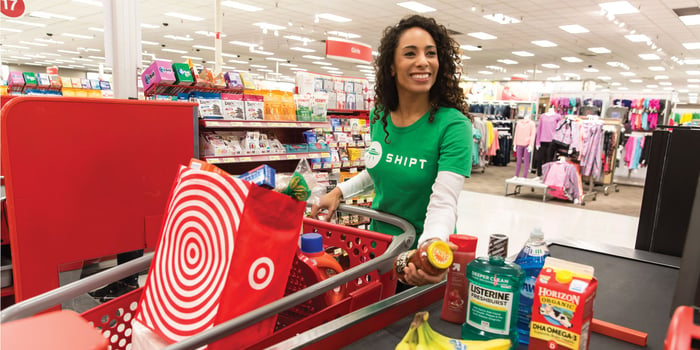 For the holiday season, Shipt is adding  150,000 shoppers, the employees who pick and pack orders, a similar increase to what e-commerce giant Amazon has planned for its own warehouses, showing how much demand Shipt is seeing for its delivery services. With that holiday-driven growth, the company will have about 350,000 shoppers, up from 100,000 before the pandemic started. That's an increase of 250% in less than a year

Target is Shipt's biggest customer, but it's far from its only one. Shipt has grown quickly since Target acquired it in 2017 as the retailer has invested in capacity, technology, and marketing. Shipt now has more than 120 retail partners, up 50% from a year ago, including big names like CVS, Kroger, Costco, and Hy-Vee. Shipt's sales have boomed during the pandemic, even tripling in the spring, and the service gives Target direct exposure to the boom in online grocery purchases beyond what it gets from its own stores and e-commerce business.

Target bought Shipt for $550 million in 2017, but the service is now almost certainly worth several times its purchase price. Instacart, the leader in grocery delivery, has seen its valuation double this year to $17.7 billion as of its most recent funding round in October. Unlike Instacart, Shipt delivers household items in addition to groceries and has similar growth potential to Instacart as online grocery sales is still just a fraction of total supermarket sales. Target has a market cap of $88 billion, and its ownership of Shipt seems ignored in its valuation.

Both Shipt and Target have kicked off the holiday season on the right foot. Shipt said that sales jumped 65% on Thanksgiving Day, driven by additional store closures during the holiday. Shipt CEO Kelly Caruso hopes to double the company's customer base to 300,000 during the key shopping season, counting on those customers to stick around even after the pandemic.

Target, meanwhile, is kicking off the traditional holiday shopping season with a slew of deals for Cyber Week, touting discounts on Apple Airpods, Roku Smart TVs, and KitchenAid Stand Mixers. The retailer also said it had a record Cyber Monday, calling it the biggest day this year for contactless same-day services including those provided by Shipt. Data from Edison Trends also shows Target had a strong Cyber Monday with online sales growing 43%, outpacing both Walmart and Amazon.

With investments in key holiday categories like toys and its digital infrastructure, including its popular same-day fulfillment services, Target looks prepared to deliver another strong quarter, and Shipt, which is capitalizing on pandemic-driven demand, is a key reason for that success.