2020 has been an amazing year for Tesla (NASDAQ:TSLA) shareholders. The electric-auto maker's stock price started the year at $418 per share, and on Dec. 7, it fetched more than $625 per share. That would be pretty impressive even if it weren't for the 5-for-1 stock split that Tesla did at the end of August, which has given investors in Tesla's stock a roughly 650% gain year-to-date.

2020's stock split came as a surprise for some Tesla shareholders, especially given CEO Elon Musk's lack of interest in discussing the subject in the past. Yet now that Tesla has shown that it can pull the trigger and split its shares when the time is right, some investors wonder if the company won't do it again in 2021 -- especially if there's an incentive for it to do so.

What it took to make Tesla split its stock

Long before it actually made the decision to split its shares, Tesla had had plenty of occasions to consider a stock split. When the stock made its first run into triple-digit share prices in 2013 and 2014 following the successful release of the Model S sedan, some believed that Tesla might follow the convention of doing a split then and there. However, Tesla ended up joining what became a growing group of companies determined not to use the $100 per share mark as a signal for a split.

Tesla's unadjusted share price stayed in a rough range of $200 to $400 or so throughout much of the second half of the 2010s. It wasn't until February that the automaker's share price flirted with the $1,000 per share mark, prompting some to think that Musk might finally take the opportunity to express his optimism about his company's future prospects by making the move. 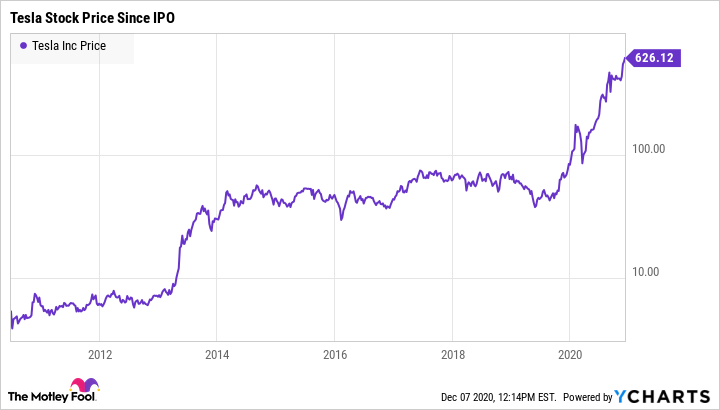 Even then, Tesla didn't move forward. Only after the coronavirus bear market ran its course and Tesla shares approached $1,000 yet again did the company reverse course and approve a split.

Why did Tesla do a stock split?

In the end, Tesla's Aug. 11 announcement of its 5-for-1 stock split didn't offer much insight into the thought process that Musk and other company executives went through in making their decision. The release says only that the intent was "to make stock ownership more accessible to employees and investors" -- a generic response that countless companies use in similar situations.

What might have prompted the move, though, was Apple's (NASDAQ:AAPL) decision to break with new convention and do a stock split. Apple's move made more sense in light of its position within the Dow Jones Industrial Average (DJINDICES:^DJI), in which share prices are vitally important in determining the weighting of each of the average's 30 constituent stocks.

In addition, Tesla might have foreseen its being included in the S&P 500 Index (SNPINDEX:^GSPC), where stock liquidity is an important consideration. Having more shares at a lower price doesn't affect the calculus for how much index-tracking investors have to own in Tesla stock, but it can make a difference in terms of trading dynamics.

The last feather in Musk's cap

I can see only one reason Tesla would do a stock split in 2021: to gain admission to the Dow. With a stock price above $625, Tesla won't get an invitation because its influence over the Dow would be too great.

But at $125 per share -- after another 5-for-1 split -- there's a compelling case for Tesla to join the Dow. The average hasn't had an automaker stock in its ranks since the previous incarnation of General Motors (NYSE:GM) filed for bankruptcy protection more than a decade ago. For a benchmark that claims to contain industrial stocks, that's a glaring omission -- and one that Tesla could reasonably remedy.

Tesla shareholders shouldn't hold out too much hope for the possibility of another stock split. As long as the share price keeps going up and the pioneer keeps successfully bringing new electric vehicles to the auto industry, few of those shareholders will be too disappointed.