Black Friday 2020 was quite different than in years past. Total spending from Thanksgiving to Cyber Monday fell about 14%, but the big stories were the shift to online sales from in-store traffic, as well as the extended holiday shopping season, which unofficially kicked off in October this year.

It's easy to see which retailers were winners and which were losers during the biggest shopping weekend of the year. Digging a layer deeper shows two big winners from the consumer trends we experienced, but importantly, their successes are likely to endure long term. Visa (NYSE:V) and Mastercard (NYSE:MA) processed more payments over the weekend than ever before. 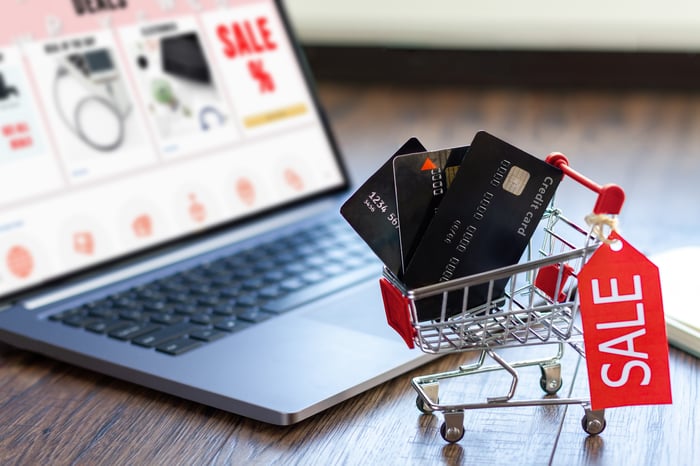 Changing the way you pay

While overall sales might have fallen, card payments increased 15%, according to data from JPMorgan Chase. That's due to the shift to more online shopping. You have to go out of your way not to use a credit or debit card for online shopping.

Meanwhile, JPMorgan's data also shows payment cards outperformed in stores. It said it saw a 12% drop in card transactions in stores over the weekend. That suggests Visa and Mastercard are winning a greater share of in-person sales, as well, as people try to avoid handling paper cash.

The same trends played out through the entire month of November and 2020, in general. Mastercard reported total spending, including cash and checks, as well as payment cards, increased 3.1% in November, excluding car sales. But online sales rose 53%.Multiple surveys suggest the increased adoption of e-commerce will endure even when in-store shopping returns to normal.

Data from the Federal Reserve also shows fewer people making in-person payments. It notes, however, that a similar percentage of people who have made an in-person payment since March used cash before the pandemic. That said, it also found 28% of consumers are actively avoiding using cash and using a credit or debit card, instead.

All of these trends favor Visa and Mastercard, the two largest card-payment networks, as we increasingly move away from using cash.

Things will only get better

As society starts to return to normal, many of these trends will stick around, as online shopping and paying with cards is usually more convenient than going to a store and handling cash.

As the economy improves and more people have stable employment, spending can increase. It might also increase the willingness of consumers to use credit instead of debit as they gain more certainty about their ability to pay off credit cards. Declines in credit card spending have been offset by debit card spending, but the fees Visa and Mastercard collect aren't as high on debit card transactions.

If Black Friday showed investors anything, it's the strength of Visa and Mastercard amid the pandemic. The two fintech companies are becoming more and more integral to the way we shop. And as we exit the pandemic, their utility will only grow stronger.