Please ensure Javascript is enabled for purposes of website accessibility
Free Article Join Over 1 Million Premium Members And Get More In-Depth Stock Guidance and Research
By Alex Carchidi - Dec 9, 2020 at 6:55AM

Like many people, at first I was elated to see AstraZeneca's ( AZN -0.16% ) report that its coronavirus vaccine is effective at preventing COVID-19. Then, reality set in: The company's clinical trial data isn't as uniformly positive as one might hope. After closer examination, it seems like there are some significant problems across the entire process.

These issues probably won't stop AstraZeneca from eventually getting its candidate through the regulatory approvals process. But they'll probably push the entire timeline to distribution back by several months. And the way that the company has handled the setback should give investors pause, especially if they're considering a purchase. Let's investigate more closely so that you'll understand whether the stock might still be a good pick for your portfolio. 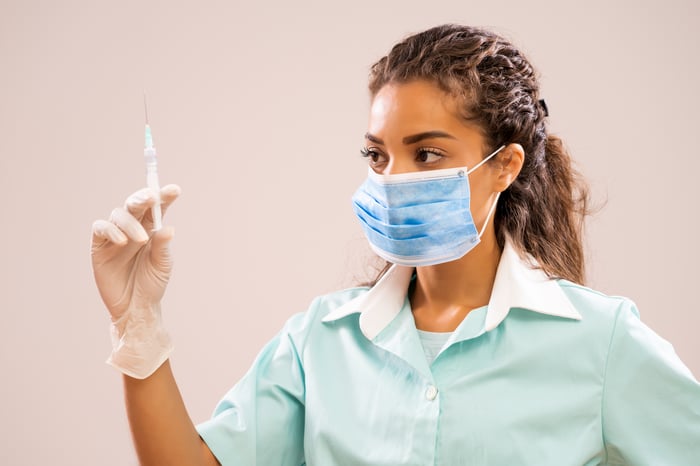 1. There's no official explanation for the effect of the dosing error

The company tested the vaccine in several different clinical trials across the globe. Every trial used a two-dose regimen with the doses spaced out by four weeks. In one of these trials, a subset of just under 2,800 participants only received half of the intended first dose as a result of a manufacturing issue. Four weeks later, they received a second full dose. The vaccine candidate was 90% effective at preventing infection in these participants. In contrast, another 8,900 participants received full two doses four weeks apart, but were only 62% protected. When these groups are averaged together, these data suggest an overall efficacy of 70.4%.

What caused this discrepancy? Nobody knows for sure yet, and AstraZeneca has not provided an explanation, which is a red flag in and of itself. Thankfully, nobody in either of the trial groups developed severe COVID-19 or any serious side effects. If I were already a shareholder, I'd be asking questions. And if I was considering a purchase of the stock, I'd be very cautious.

When companies are selective in the clinical trial data that they report on, it's a red flag. In fact, around half the people in the trials may have been excluded from the results that AstraZeneca reported. Plus, there are gaps in the data it announced.

Of the people who got the lower dose that proved to be more effective, none were over age 55, unlike in the full-dose group. The data on the older people in the lower dose group hasn't been released yet. This is important because older people tend to have more severe COVID-19 symptoms, and they also tend to have a weaker immune response even when they're inoculated. If the vaccine doesn't work as effectively for them, it's a major downside. It'd crimp demand for the product in a major way, especially compared to competing candidates that don't have the same problem.

3. The trials weren't controlled in the same way

AstraZeneca's vaccine trials spanned multiple countries and tens of thousands of people. If you want to make an apples-to-apples comparison between one clinical trial and another that's in a different location, the trials need to be designed in the same way, and they need to use the same vaccines and placebos. That didn't happen, which is yet another red flag.

In the U.K-based trial, the control group received a meningococcal vaccine. That inoculation was chosen because it causes mild side effects, so participants can't tell whether they got the investigational coronavirus vaccine or not. This is very much preferable because it ensures that people won't act differently, thinking that they got the experimental vaccine and are subsequently immune to infection. But, in the Brazil trial, people in the control group got a saline injection that didn't cause any side effects.

What difference could this make in the big scheme of things? It's hard to say conclusively, but an experienced trial operator like AstraZeneca should not have intended to use different controls in two separate (but complementary) studies. The decision to then combine the studies' results in order to make an argument for vaccine efficacy is troubling. The reality is that the world will probably still benefit from its vaccine sooner or later, but the fact that it mishandled  such an important set of tasks has shaken my faith in the company suddenly and deeply.

Look closely over the next few weeks to see how management approaches these issues. So far, an analysis published in the Lancet, a leading medical journal, has confirmed the company's initial claims, reiterating that the overall average efficacy is just over 70% when accounting for all age groups and dosing regimens. But because there are still questions surrounding the efficacy of the half-dose regimen and its effectiveness in older adults, things aren't entirely settled yet. My hunch is that AstraZeneca will need to do some more work to give the medical community full confidence in the vaccine, but that it will succeed in doing so. So, if the stock drops in the meantime, that could be a good time to buy.