Machine learning and artificial intelligence are solving problems that we never thought possible. Just this week, a unit of Alphabet-owned Google -- DeepMind -- used the approach to solve a mystery about how proteins fold that had vexed scientists for 50 years.

Another use of the powerful algorithms that doesn't get as much publicity is simulating complex systems to avoid problems that we didn't even know were there. That appears to be what researchers at Massachusetts Institute of Technology (MIT) have done. And it raises questions about the reported efficacy of the celebrated COVID-19 vaccines from Pfizer (NYSE:PFE) and BioNTech (NASDAQ:BNTX), Moderna (NASDAQ:MRNA), AstraZeneca (NASDAQ:AZN), and others. 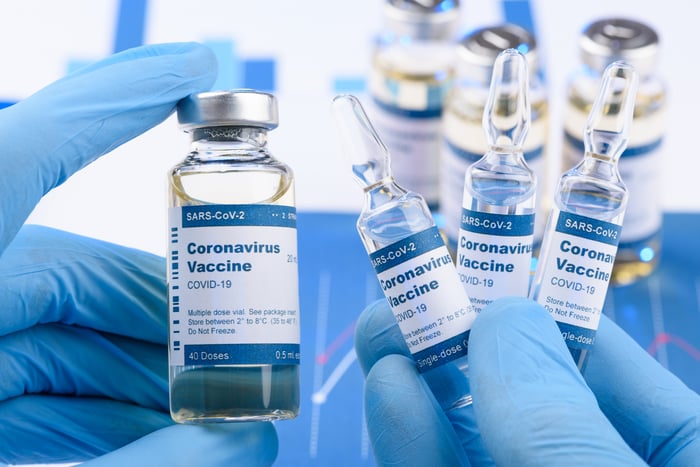 Focus on the spike

Everyone is thankful we appear close to having several approved vaccines for COVID-19, and most are surprised at how fast the vaccines have been developed. What once took a decade or more -- the fastest vaccine ever developed was for mumps, which took four years -- has been accomplished in less than 12 months.

In addition to the deluge of funding and attention, the record pace has been achieved by focusing on the spike protein that the SARS-CoV-2 virus uses to invade human cells. Although it isn't the only one, the spike protein is the most common way the virus binds to the outside of cell membranes, allowing the virus genome to invade the cell and turn it into a virus-producing factory. It was natural for researchers to focus on this unusual attribute to try to prevent the attachment and subsequent invasion. However, that focus may have inadvertently prioritized some groups of people over others. It turns out we don't all react to the spike protein the same way.

Demographics have been an issue all along

The story of the 2020 pandemic has always been about demographics -- whether it is the disproportionate health effect on minorities or the divergence between knowledge workers who could log in remotely and those who needed to continue to show up at work. The virus has exposed two different realities for many Americans.

A study published in September by NPR revealed that Black Americans made up more than 21% of COVID-19 deaths in the U.S., despite being only 12.3% of the population. Conversely, white Americans make up 61% of the U.S. population, but only 51% of deaths. One variable rarely explains any outcome, but the differences are striking. Similarly, the unemployment rate for Black Americans is 10.3%, compared to 5.9% for whites. Although the gap is narrowing, it's another statistic that tells the story of different experiences in 2020 America depending on race.

Vaccines to the rescue

The negative effect on our health and everyday lives is the reason most people are so excited to finally have approved vaccines on the horizon. With Pfizer, Moderna, and AstraZeneca all publicizing data that show their vaccine candidates could be at least 90% effective at preventing COVID-19, the assumption is that life may soon return to normal. In response to the good news, the stock market rallied nearly 11% in November -- its best month in more than 30 years.

That's why it surprised me when MIT's Computer Science and Artificial Intelligence Lab (CSAIL) modeled a vaccine like those approved and found it to be significantly less effective for some groups than others. It turns out people have different versions of genes -- called alleles -- that determine how cells behave. When a virus invades, it fits into grooves on cell membranes, triggering an immune response. This is how vaccines work. By using bits of the SARS-CoV-2 virus -- specifically the spike protein -- the vaccines that have been developed introduce those bits of the virus that bind to the cell and trigger a response. For people who self-reported as Black or Asian, the alleles caused a less reliable bind to the spike protein, leading to a higher potential that the vaccine will prove ineffective for them. While the ineffectiveness is likely to occur in less than one percent of white people, CSAIL predicts it could affect 10% of those of Asian descent.

While it sounds scary, the vaccines are still far superior to the seasonal flu vaccine and will offer a great deal of protection for most who take them. Additionally, the MIT research is not yet peer-reviewed and is only a prediction -- albeit based on a very good model. One way around the issue is for future vaccines to be created with bits of the virus other than the spike protein. It made a good target for the quick turnaround we needed in 2020, but some drugmakers should take note for future versions.

Also, it isn't just genes that will limit the effect of the vaccine. A recent study found that the percentage of Americans who say they will get vaccinated has dropped from 72% in April to 48% in October. To allay fears of safety among minority groups, it will be especially important for companies to highlight the racial diversity of the participants in clinical trials for their COVID-19 vaccines.

The stock market recovery, and the return to normal life, depend on two things: An effective vaccine and a majority of people getting it. As we come close to checking the first box, it is more important than ever to address factors that may limit anyone's willingness to get vaccinated. If the prediction from CSAIL withstands peer review, it may add another reason that those most vulnerable to COVID-19 will rationalize not getting a vaccine. As an investor, I'll be carefully watching any distribution and administration statistics that are made public for confirmation that the recovery is coming for everyone in the economy.