In a week full of finance sector dividend declarations, American Express (NYSE:AXP) is adding its own to the collection. On Thursday, the credit card giant declared a fresh quarterly payout of $0.43 per share of its common stock. This is to be paid on Feb. 10, 2021, to investors of record as of Jan. 8, 2021.

The amount matches the preceding five payouts dispensed by the company. Prior to that, it paid $0.39 per share.

Like its two major payment card rivals, Visa (NYSE:V) and Mastercard (NYSE:MA), American Express is a steady and reliable payer of dividends. It continues to distinguish itself among the three by having a relatively high yield -- 1.4% as of the most recent closing stock price, compared to Visa's 0.6% and Mastercard's 0.5%. 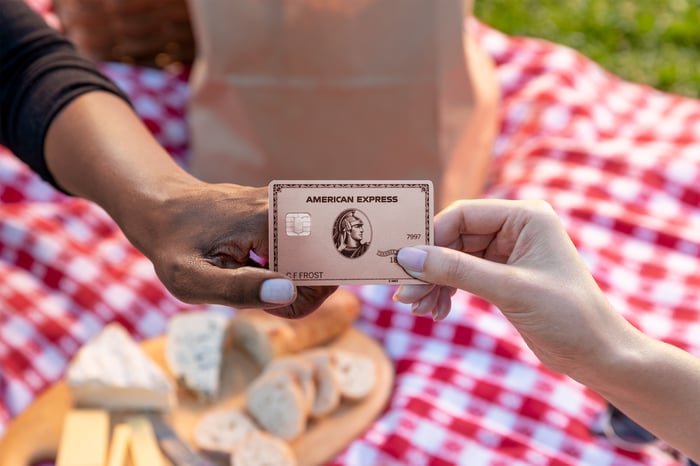 Mastercard, by the way, declared its latest quarterly dividend on Tuesday; its new payout of $0.44 represents a raise of 10% over its predecessor. American Express hasn't indicated when it might hike its own distribution.

Since payment card companies are so dependent on consumer spending, American Express is a play on the direction of the economy. With the recent news of coronavirus vaccines heralding the potential beginning of the end for the global health scourge, many are optimistic that the global economy will also become healthier.

This is a particularly good outlook for banks and credit card companies, which for the most part fell in share price during the early stages of the pandemic. Investors were worried about large-scale loan defaults from borrowers, which haven't yet materialized (and ultimately might not, if the economy recovers relatively quickly).

On Thursday, American Express stock rose marginally against the 0.1% dip of the S&P 500 index.