Early in my career, I was fortunate to work under a few very strong executives. One of the things I learned that stuck with me was the "say/do" ratio. In other words, how often are you able to follow through and complete the things you say you will, on time? As Gilead Sciences' (NASDAQ:GILD) CEO closes in on his second anniversary with the company, it's worth revisiting the priorities he laid out when his tenure began to see if he is doing the things he said he would. Perhaps more importantly, how are they working out? 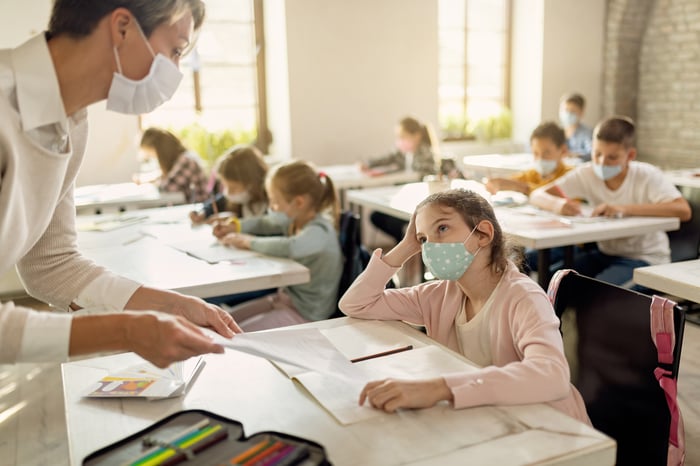 Daniel O'Day joined Gilead as the CEO and Chairman of the Board in March 2019. Admittedly, one part of the CEO job is being a cheerleader. You can't take everything they say as a promise. Very few leaders are going to express doubt about something important to the company's future -- and stock price. With that said, as individual investors, we only have so much to go on when evaluating leadership. Comparing a CEO's words to how things play out in the subsequent years is fair, but it isn't a perfect science.

In his first earnings call, O'Day laid out three priorities: strengthening the pipeline of drugs, commercializing existing drugs, and making sure the right people were in the right roles to execute that strategy going forward. Those three priorities were discussed in some detail on that May 2019 call.

In reference to the first goal, strengthening of the pipeline, O'Day specifically expressed optimism about two clinical studies with filgotinib, the arthritis drug now marketed as Jyseleca. One study examined the drug alone and another in combination with a Pfizer cancer drug. The drug was originally developed by partner Galapagos (NASDAQ:GLPG), but the companies entered a deal in 2015 to continue to develop and commercialize it. Additionally, the new CEO called out the need to better understand work at Kite Pharma, the $12 billion acquisition made in 2017. The acquisition of Kite Pharma was Gilead's attempt to enter the cancer treatment market -- specifically cell therapy.

With regard to the commercialization priority, the attention was again on filgotinib, with a call to mobilize around this driver of future growth. Finally, the first move related to people was announced on that very call, as Gilead's longtime CFO announced she was leaving the company. The move followed several other high-profile executive departures.

What has been done?

The company has definitely been busy since that initial call last May. There have been three deals to bolster Gilead's pipeline. A few months after O'Day took the helm, Gilead took a $5 billion stake in Galapagos to gain additional exposure to filgotinib's growth potential and the rest of Galapagos' pipeline. In March 2020, Gilead spent $4.9 billion to buy Forty Seven. This deal gave Gilead access to the monoclonal antibody magrolimab, a therapy that targets cancer's ability to hide from the human immune system. Finally, in September, Gilead announced plans to spend $21 billion on Immunomedics, the maker of breast cancer drug Trodelvy.

The results have been mixed. The U.S. Food and Drug Administration (FDA) rejected the use of filgotinib for rheumatoid arthritis due to toxicity, and the company has paused three other trials for the drug pending feedback from the agency.

On the other hand, magrolimab has delivered. Just this week, results of a Phase 1 study with magrolimab demonstrated safety and efficacy in patients with acute myeloid leukemia (AML). Success of Trodelvy will be more about its use outside of breast cancer since the acquisition of Immunomedics was just completed in October and the drug has been approved for use in breast cancer patients since April.

On the people side, the company has added several executives to rebuild the leadership team. The retiring CFO was replaced internally, and O'Day has added a Chief Commercial Officer from Bristol-Myers Squibb (NYSE:BMY), a Chief Medical Officer from Genentech, and a new CEO for Kite Pharma -- the cell therapy acquisition that has since been separated as a stand-alone business unit after disappointing progress to date.

What grade would you give?

To be successful, chief executives have to think long term. Although Daniel O'Day expressed a sense of urgency when taking the top job, it's clear he is making moves that can only be judged after years, not months. The acquisitions of Forty Seven and Immunomedics signal a willingness to think beyond the pipeline Gilead had going into 2020. If O'Day's tenure is going to be successful, it will be due to Gilead's ability to find new applications for magrolimab and Trodelvy beyond what was already priced in when they bought each company. Whether that happens will rest largely on the capability of new leaders to further develop and commercialize those drugs.

What's clear is that the market hasn't been impressed. Gilead's stock sits almost exactly where it did when O'Day took the helm. Like the market, I'm skeptical of the company's ability to transform itself by acquiring cancer drugs. Strike one: the purchase of Kite Pharma and the deal with Galapagos. Neither has produced the hoped for commercial success yet. So far, the company has paid a steep premium for two publicly traded companies with drugs that had already proven themselves. For Gilead shareholders, it was like buying two other stocks for a lot more than the price they were trading at. Time will tell if O'Day's big bets pay off. But without a track record in developing oncology drugs, I'm not interested in the gamble. Allowing for the long term potential, even the most optimistic shareholder has to give the CEO an "incomplete" so far.