Blue Apron (NYSE:APRN) said Thursday that its business is improving more than previously thought, though it didn't say whether that meant more sales, more profits, more customers, a combination of the three, or something else. It only said in a press release that when it does release its financial results in February, they will "be better than the company's previously provided outlook for the period."

The meal kit delivery specialist has benefited from the increase in people eating at home during the pandemic lockdowns as services that delivered food to your door became less of a luxury and more of a necessity for many consumers. Sales of meal kits increased and it even reported a surprise profit in the second quarter. 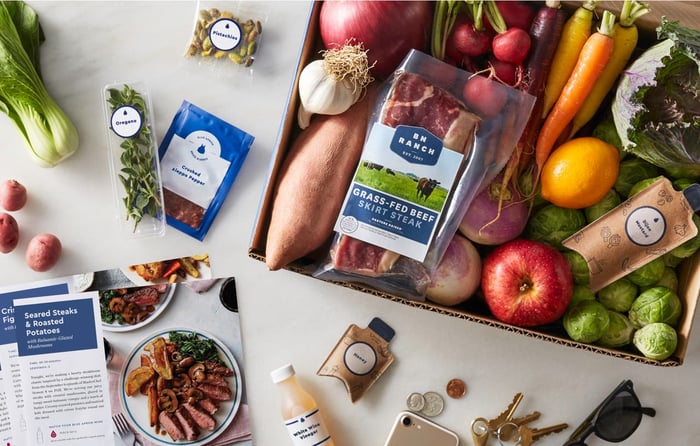 While customer acquisition wasn't mentioned, Blue Apron put together back-to-back quarters of more customers earlier in the year, but returned to higher churn rates in the third quarter when it ended the period with 354,000 members, down 41,000 from the second quarter and 7.5% below last year. Orders, order value, and revenue per customer -- metrics Blue Apron identifies as key to understanding its progress -- all declined.

It also announced last month that it was no longer considering selling the company. The meal kit company believes the gains it made during the pandemic will hold, making its future as a stand-alone business more viable, although that remains to be seen. However, it is true that as the country begins the convulsions associated with new lockdown orders, Blue Apron's business could be better for it as people stay home more and fire up their skillet using its meal kits.

The company also announced Thursday that its CFO and treasurer, Timothy S. Bensley, had resigned to "pursue another opportunity," though he will continue to advise the company through the middle of the coming quarter to help transition his role.