Blue Apron (NYSE:APRN) has made numerous mistakes during its years as a public company, but the unforced error its board just made may be its biggest yet.

The meal-kit delivery company reported third-quarter earnings that were the proverbial mixed bag, but Blue Apron's leadership seems to think those results signal renewed business strength, so it has decided to stop pursuing a sale of the company. 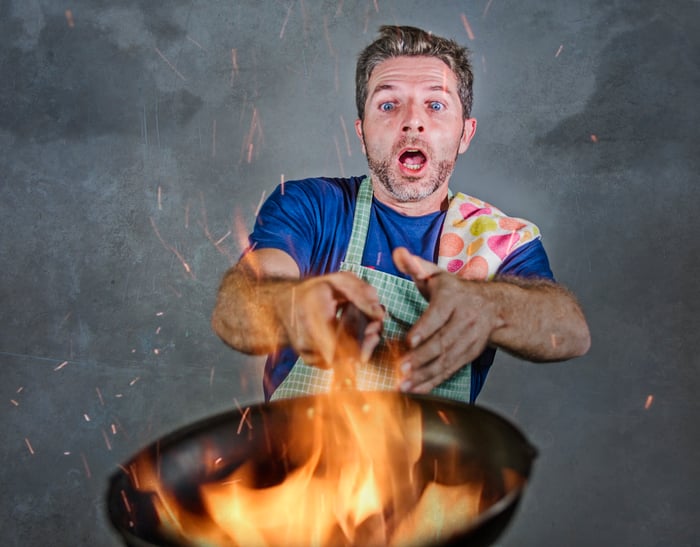 The coronavirus pandemic helped Blue Apron immensely. The company was circling the drain prior to COVID-19, but lockdowns, stay-at-home orders, and social-distancing efforts led to higher demand for meal kits. Services that delivered food to your door became less of a luxury and more of a necessity for many consumers.

In the third quarter, Blue Apron's revenue jumped 13% year over year to $112.3 million, and the company generated adjusted EBITDA of $8.4 million. That followed a 10% revenue gain in the second quarter, when it booked a profit of $1.1 million. Management has taken these results as indicators that all is well. It's not.

The meal-kit purveyor says that in light of its stronger balance sheet and the improvements it has seen in its business, it has wrapped up the strategic review it began early in 2020 when the wheels looked like they were going to fall off. And rather than pursuing a strategic alternative, the board of directors has decided Blue Apron will continue doing business as a stand-alone company.

That choice to take down the "for sale" sign they tacked up in February is a decision both the company and its investors will likely rue.

Despite the revenue and profit gains of the third quarter, Blue Apron's business is resuming its downward spiral.

Across virtually all the metrics the company tracks, its business has already begun to deteriorate again. The number of customers fell by 10% sequentially to 354,000, the number of orders they placed fell by 11%, the value of each order declined by 4%, and average revenue per customer dropped by 5%.

These were the same problematic trends Blue Apron was facing when the board decided to put the company up for sale. It's clear that the bounce it experienced  was completely the result of the unique conditions of the pandemic rather than deriving from any successes driven by management's growth strategies.

The company may be able to make a go of it for a while longer now that it has shored up its balance sheet -- which it did by issuing 4 million new shares in August (i.e., by diluting its previous shareholders) and by refinancing its debt. The nation's new surge in COVID-19 cases to record levels could also extend Blue Apron's run a bit longer, as it may give more consumers an incentive to enroll in its delivery service. But the company has shown that it won't be able to retain momentum once the crisis passes.

The market seems to recognize this. In the days since it reported earnings and announced it was no longer looking for an acquirer, Blue Apron's stock has lost a third of its value.

The high cost of lost opportunities

It seems the best hope for shareholders at this point is that some other company takes advantage of this situation to make a bid for Blue Apron anyway.

Meal-kit delivery just isn't a viable business model for a stand-alone company, which explains why many that had attempted it have been bought out. Supermarket giant Albertsons bought Plated several years ago, Chef'd ran out of money and closed down until it was acquired by True Foods, Kroger bought Home Chef, and Nestle just last week bought Freshly for $1.5 billion.

For Blue Apron, failing to sell was a missed opportunity. Had the board connected with a buyer while the business looked to be rebounding, it might have garnered a higher selling price. Now, investors will pay the price for that blunder.