The stock market managed to salvage another mixed day on Friday, with the closing numbers hiding what had been a sizable decline at its worst levels of the day. Most market participants seem fixated on whether the federal government will come through with more financial support for Americans before January, and it's unclear whether lawmakers will be able to find common ground. The Dow Jones Industrial Average (DJINDICES:^DJI) managed to eke out a gain, but the Nasdaq Composite (NASDAQINDEX:^IXIC) and S&P 500 (SNPINDEX:^GSPC) were slightly lower on the day.

This week has been full of initial public offerings, many of which have been focused on the technology industry. On Friday, though, attention among IPO investors turned to biotech stocks, with a number of companies making their stock market debuts. Among the biggest gainers were AbCellera Biologics (NASDAQ: ABCL) and Certara (NASDAQ: CERT), which gave the big-name IPOs from earlier in the week a run for their money in terms of first-day gains.

AbCellera gets a good reception

AbCellera priced its IPO overnight at $20 per share. The stock nearly tripled on its first day, closing the regular trading session at $58.90 per share.

AbCellera has been on investors' radars for quite a while now. Back in March, pharma giant Eli Lilly (NYSE:LLY) announced that it would collaborate with AbCellera to develop antibody therapies for fighting COVID-19. It was less than three months later that the two companies had started a phase 1 trial of its LY-CoV555 antibody. By November, the pair had received emergency use authorization from the U.S. Food and Drug Administration for patients with mild to moderate cases of COVID-19 in patients 12 and older. 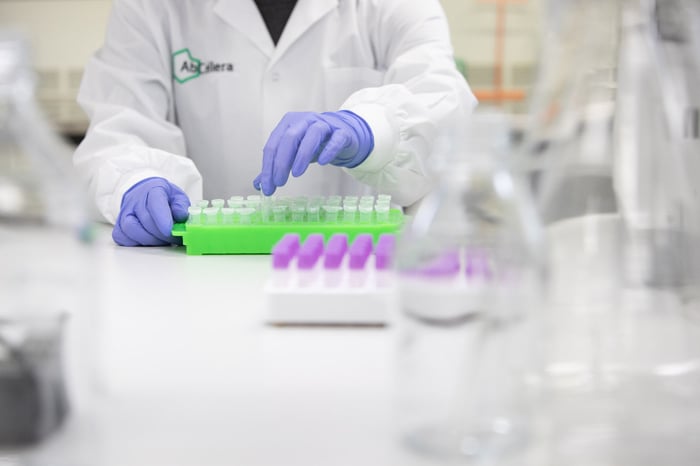 Looking forward, investors have high hopes for the company. Lilly has said it intends to manufacture 1 million doses of the antibody treatment by year-end. AbCellera's agreement with Lilly will give it a cut of the revenue from sales of the treatment. Beyond COVID-19, though, AbCellera's proprietary technology allows drugmakers to work much more quickly than in the past to develop promising candidate treatments for a wide variety of different diseases.

With the rise, AbCellera has jumped out to a market capitalization of almost $16 billion. That doesn't compare with the $100 billion valuations that at least one other IPO got this week, but it's not a bad start for a company that looks promising.

Elsewhere, shares of Certara priced at $23 per share in its initial public offering, having boosted the size of the IPO in the process. First-day gains amounted to 66%, with the stock closing above $38.

Certara claims the status of world leader in biosimulation. The company's software and services allow biopharmaceutical companies to make better decisions more quickly, at lower cost, and with better outcomes for patients. Many regulatory agencies use Certara's platforms, including the FDA and its counterpart in Europe.

Increasingly, companies in the biopharma industry have relied heavily on Certara. The company has helped prepare and deliver more than 200 submissions to health authorities and regulators around the world in the past four years. More than 90% of all companies that have received at least one new drug approval from the FDA in the last six years are Certara clients.

The interesting thing about both of these IPOs is that they help with the process of creating new treatments. That gives Certara and AbCellera a lot of growth potential, because they can help a much wider variety of clients than just a single drug developer. That's a big part of why they've gotten a good reception from investors, and it'll be interesting to see if they can live up to their first-day jumps.