Investors came into the new week on an optimistic note, and their positive views helped boost the stock market. Everyone is pleased to see coronavirus vaccine distribution begin in the U.S. and other areas around the world, and the hope from an investing standpoint is that with the help of some short-term economic assistance from the federal government, the economy will be able to get back on a firm footing in 2021. Just after 11 a.m. EST, the Dow Jones Industrial Average (DJINDICES:^DJI) was up 112 points to 30,158. The S&P 500 (SNPINDEX:^GSPC) climbed 14 points to 3,678, and the Nasdaq Composite (NASDAQINDEX:^IXIC) picked up 134 points to 12,512.

Many investors have been interested in electric vehicle company NIO (NYSE:NIO), and as it turned out, those who took the opportunity to buy newly issued shares of the Chinese EV pioneer appear to have paid a bargain price. Meanwhile, Virgin Galactic Holdings (NYSE:SPCE) got bad news from a test flight, sending its shares lower despite the rising market.

More money for NIO to grow

Shares of NIO fell 1% late Monday morning, but that was considerably above where the stock had started trading earlier in the day. China's best-known electric vehicle company took advantage of favorable market conditions to boost the size of its secondary stock offering, and those who participated ended up getting a better price than those who waited for the stock to trade on the open market.

NIO initially expected to sell 60 million American depositary shares, which would have generated about $2.5 billion in proceeds based on Friday's closing price. Instead, the automaker ended up boosting the size of its offering to 68 million shares. It got a price of $39 per share, or more than 7% below where the stock finished Friday. However, after opening just below $40 and trading as low as $39.50, NIO stock rebounded.

The reason for the reversal likely has to do with investors recognizing that NIO actually has good uses for the $2.65 billion in cash it will get from the larger offering. With the need to keep doing research and development for designing new vehicles, NIO will put the offering proceeds to work toward expanding its product line. Moreover, the race for autonomous vehicle technology is important, and the more capital NIO has at its disposal, the more likely the automaker is to come up with innovations that will help it keep up with Tesla (NASDAQ:TSLA) and other EV players. 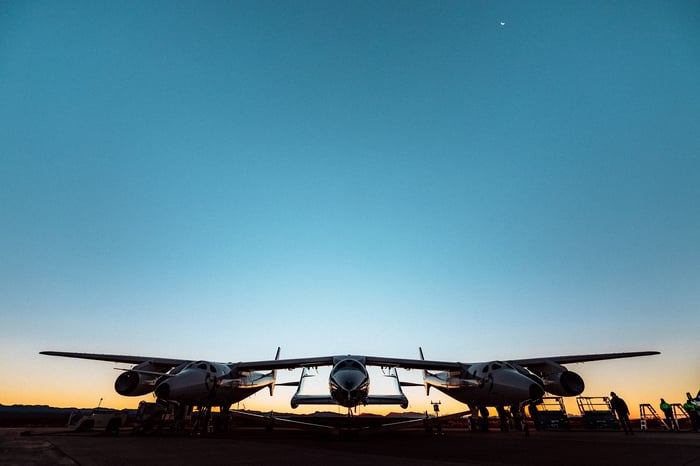 Virgin Galactic falls back to earth

Going from the ground to the sky, investors in Virgin Galactic Holdings weren't as pleased on Monday. The stock fell more than 11% as shareholders took in news of a disappointing test flight over the weekend.

Virgin Galactic's Saturday morning launch from Spaceport America started off on a promising note, as the White Knight Two VMS Eve mothership took off successfully with the VSS Unity spaceplane attached. However, when Unity detached from Eve, Unity's engines didn't fire. Both Unity and Eve returned to earth safely with no crew injuries.

On Monday, Virgin Galactic explained that preliminary analysis suggests that the computer monitoring the propulsion system lost its connection, which halted the ignition sequence and stopped the engine burn. This fail-safe, as CEO Michael Colgalzier explained, is one of many features that produces "the level of safety that consumers will want and will be expecting from us."

Obviously, investors would have preferred to see a successful launch. However, Virgin Galactic expects to try the test flight again, and shareholders hope the company will be able to find a flight window soon to keep the overall program on track.