Please ensure Javascript is enabled for purposes of website accessibility
Free Article Join Over 1 Million Premium Members And Get More In-Depth Stock Guidance and Research
By James Brumley - Dec 15, 2020 at 9:04AM

It's unlikely the telecom giant will be able to make the satellite cable company seem any more valuable in the future.

The quest to offload DirecTV continues, though bids remain disappointing. The Wall Street Journal recently reported the best bid AT&T ( T -1.25% ) has received to date for the struggling satellite cable platform is "above $15 billion including debt," topping a reported offer of less than $15 billion made in August.

The Journal's phrasing could mean myriad numbers in excess of $15 billion. The wording, however, implies the recent separate bids from Michael Klein-led Churchill Capital and private equity firm TPG aren't leaps and bounds better than $15 billion. That makes sense. Bloomberg Intelligence's John Butler estimated in August that DirecTV would fetch around $20 billion. Any plausible bid is still less than half the $49 billion AT&T paid for the cable provider in 2015, not counting the assumption of DirecTV's $17 billion worth of debt. 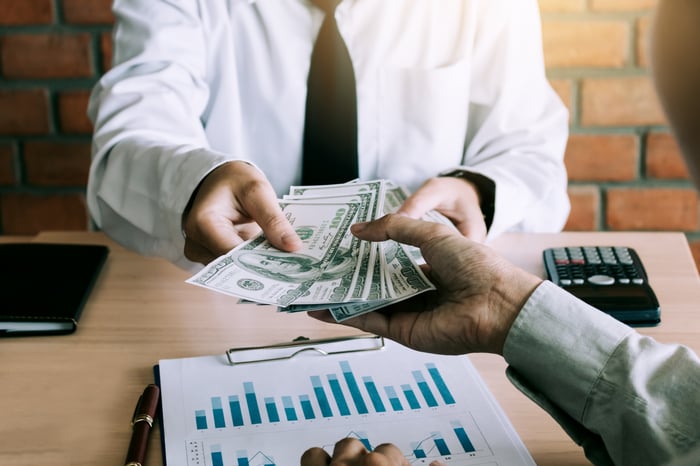 Such a deal would be a bitter pill for AT&T's management (as well as its shareholders) to swallow, locking in a loss on the deteriorating television platform. Given its lack of options and DirecTV's woes though, an offer in the $15 billion to $20 billion range plus some of AT&T's $153 billion debt load would be an acceptable exit of the business. That's especially true considering AT&T reportedly wants to maintain a majority of DirecTV, and only remove the property from its balance sheet and transfer management of the business to the buyer.

DirecTV is on the ropes

DirecTV is dying. AT&T still serves 17.8 million cable customers, most of which are DirecTV subscribers. But that's well down from the 25.1 million TV customers plugged in just a couple of years ago. Video entertainment revenue has fallen accordingly, rolling in at just under $7.0 billion last quarter, off by 16% from levels achieved at this point of 2018. 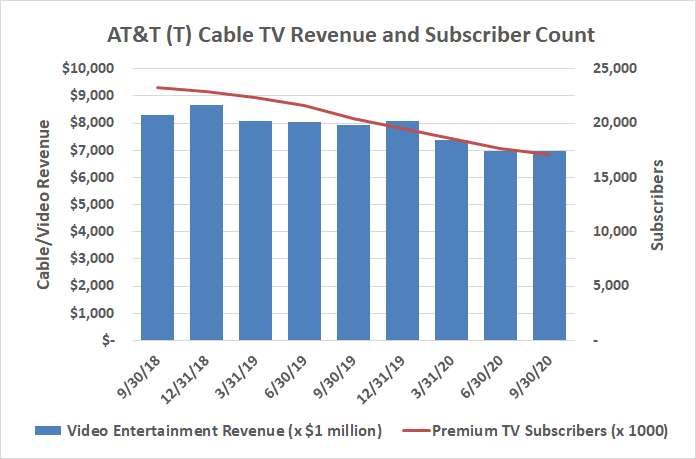 It's also not entirely clear exactly how profitable DirecTV is (if it's profitable at all).

While AT&T breaks out video, broadband, legacy voice and data, and service/equipment sales within reports of its Entertainment Group, it doesn't offer that sort of income or EBITDA (earnings before interest, taxes, depreciation, and amortization) breakdown for those sub-groups. The company only indicates that EBITDA margins for Entertainment Group are on the order of 20%. That rate loosely reflects EBITDA margins for the satellite cable player's most relevant rival DISH Network ( DISH 0.23% ) for the first three quarters of this year though, and last year.

DISH Network's accounting statements show us something else, however, about the satellite cable business that doesn't readily show up on AT&T's books. The statements suggest this is an equipment-intensive approach that leads to significant deprecation. DISH's net income is ultimately only about 10% of its revenue. Assuming AT&T's operation mirrors that of DISH Network's, DirecTV's trailing four-quarter revenue only added on the order of $3 billion to the bottom line during that stretch. That's only back-of-the-envelope math, but even for scope purposes, it's not earth-shattering.

Pinning down the right price for DirecTV

So what's a fair price for half of a business that generates around $30 billion in annual revenue and perhaps something near $3 billion in actual yearly income?

There's no hard-and-fast figure, but 10 times annual EBITDA is a rule of thumb to use as a starting point. That multiple would imply DirecTV in its entirety is worth on the order of $60 billion on the open market. Whatever debt comes with the deal would lower that prospective value on a dollar-for-dollar basis.

Another perspective: AT&T paid roughly 24 times DirecTV's 2014 net income when it sealed the deal in 2015, and that was a fairly typical year for the cable television outfit. That sort of valuation would imply a market value of around $70 billion for DirecTV now, assuming no debt is transferred. (In retrospect, AT&T clearly paid more for the cable player's perceived potential than its actual profits.) But again, AT&T doesn't actually want to sell all of DirecTV to a would-be buyer. It only wants to sell enough to remove the satellite cable service's numbers from the parent company's books, while still enjoying the benefits of half-ownership. That's a tough sell in itself.

Then there's a glaring problem that prospective suitors understandably can't get past with DirecTV's business. As already noted, DirecTV is shrinking and AT&T seems powerless to stop it. There's no assurance a buyer would be able to achieve something DirecTV's current owner can't.

AT&T can't afford to be stubborn

By the time you read this, the window to submit bids for DirecTV will likely be closed. AT&T will then have to consider its offers. The highest one isn't necessarily the best one. Remember, the buyer will be running the satellite cable company going forward, but AT&T will still participate in its success (or lack thereof).

In this light, though, any offer above $15 billion that includes the removal of DirecTV's portion of AT&T's total debt is a perfectly reasonable offer the telecom company would be wise to consider. The mistake would be refusing to accept any offer, then continuing to chew away the remaining value of the clearly broken satellite cable brand. If AT&T was able to fix it, it would have done so by now.