It's easy to miss the big picture with stocks by following headlines. Writers focus on whatever fascinates investors at the moment, and why shouldn't they? It's what people most want to read about.

But the big story of the moment often obscures information that leads to greater wealth from long-term investing. A case in point is British pharmaceutical company AstraZeneca (NASDAQ:AZN). The company has received press attention for being one of the leaders in the COVID-19 vaccine race, but its stock price has gone basically nowhere in 2020.

There was plenty of vaccine-related news flow out of the company this year. In April, the company announced its partnership with Oxford University to commercialize the vaccine. Strong early trial results followed in July. Last month, it was announced that interim results from the phase 3 trial were good enough to warrant submitting the vaccine for regulatory approval. Yet there were low points, too. A pause in the trial lasted most of September and October, and a dosing error in the phase 3 trial muddied the water for interpreting results. 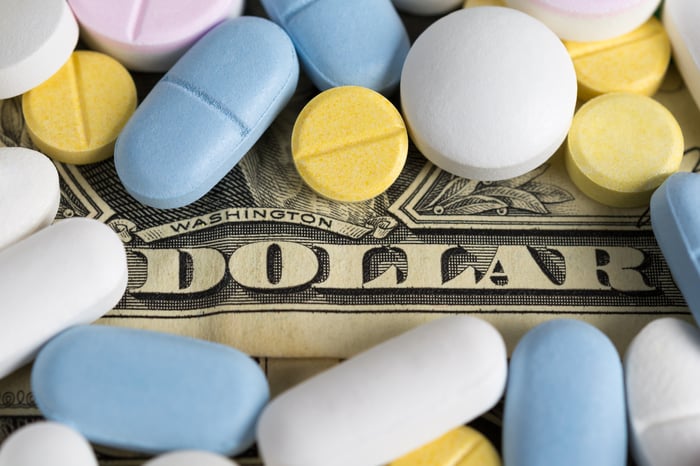 Why the vaccine doesn't matter

Through all that turmoil, the stock price hasn't reacted much. Why? AstraZeneca won't make any profit from the vaccine next year and probably not ever. The company has pledged to forgo profit from the vaccine during the pandemic, which has little chance of completely ending in 2021. Any investor that holds hope that the company will be able to raise the price when the pandemic is over should consider the fact that there will be multiple vaccine vendors by that time. There are 58 COVID-19 vaccines in development -- all with inventory that will be rapidly declining in value.

The vaccine also doesn't prove anything about the company's technology, either. Wins by Moderna and BioNTech in its partnership with Pfizer are huge steps toward validating the messenger RNA technology that underpins their entire companies. AstraZeneca didn't even develop AZD1222. It doesn't have a long-term vaccine strategy anyway.

The market isn't giving AstraZeneca stock any love in this pandemic year. But the bull case has nothing to do with the vaccine. AstraZeneca could be a big winner from COVID-19 even if it practically gives away AZD1222.

AstraZeneca is in late-stage testing of an antibody cocktail that could prove superior to the one from Regeneron that was given to President Trump. This medicine, AZD7442, consists of two antibodies developed by Vanderbilt University that have been enhanced for longer life using the company's proprietary technology. This long-acting antibody combination could not only bolster the immune systems of patients infected with COVID-19, but could also prevent the disease for six to 12 months in people for whom a vaccine is not appropriate. It could be used in conjunction with a vaccine tp protect high-risk patients, or be administered to people exposed to the virus who haven't been vaccinated.

The profit from this medicine, which is priced much higher than a vaccine could ever be, might be a game changer. A Morgan Stanley analyst thinks it could boost AstraZeneca's 2021 profit by a jaw-dropping 30%.

But a potential windfall from COVID-19 isn't the biggest reason to own AstraZeneca stock. The company has some of the best growth in big pharma, making it one of the most attractive buys in the industry at the moment. In a year when the pandemic has disrupted routine medical care, the company has grown revenue by 10% in constant currency and core earnings per share by 16% in the first nine months.

The key driver is AstraZeneca's oncology portfolio, which has grown revenue by 24% in 2020. Blockbuster cancer drugs Tagrisso, Imfinzi, and Lynparza are putting up big growth numbers in important indications such as lung, breast, and ovarian cancer. It looks like recently launched blood cancer drug Calquence will be a big winner, too. The company also has several blockbusters in its cardiovascular, renal, and metabolism business, including Farxiga for blood sugar control in type 2 diabetes patients and Brilinta, which reduces the chance of heart attack and stroke. The pandemic disrupted the company's respiratory drugs, which put up double-digit growth in 2019. AstraZeneca's pipeline is loaded, with 172 projects underway and nine new drugs in late-stage trials.

A move to rare diseases

Oncology continues to be the area of greatest investment by the pharma industry. Drug companies also prize the rare disease field since insurance companies pay high prices for drugs that save small patient populations. AstraZeneca entered the rare diseases space with an announcement this weekend that it plans to acquire Alexion Pharmaceuticals (NASDAQ:ALXN) in a $39 billion deal.

Investors seem worried about the price tag, but the acquisition creates a fourth area of strength for AstraZeneca, making it one of the more balanced profit generators in pharma. Unlike several of its peers, it's not dependent on the growth of one particular drug. Instead, it's well diversified in some of the most attractive growth areas in the pharmaceutical business. The company paid a significant premium for the purchase, but Alexion was arguably undervalued, especially compared with the companies getting all the headlines now. AstraZeneca says that acquiring Alexion will significantly increase cash flow generation, allowing it to increase R&D spending, reduce debt, and increase the dividend, which will make the stock more attractive to income investors.

AstraZeneca will probably keep making headlines as the world looks for hope in the face of rising pandemic numbers. Savvy long-term investors should look beyond the market obsessions of the moment and instead seek solid growth stories such as AstraZeneca. As soon as Fool disclosure rules allow, I'll be taking advantage of the dip after the Alexion news to start a new position in the stock.

AstraZeneca stock is 23% below its all-time high set this summer. It sells for a low 16 times the analyst consensus estimate for next year's earnings, despite expectations for a 19% boost in earnings per share in 2021. The dividend yields 2.6%.