Please ensure Javascript is enabled for purposes of website accessibility
Free Article Join Over 1 Million Premium Members And Get More In-Depth Stock Guidance and Research
By Leo Sun - Dec 16, 2020 at 11:44AM

Baidu also boosted its existing buyback plan from $3 billion to $4.5 billion this month, and a recent Reuters report suggested it might start producing its own electric vehicles to complement its driverless efforts. Those headlines all buoyed Baidu's stock -- but should investors chase its recent rally, or take profits instead? 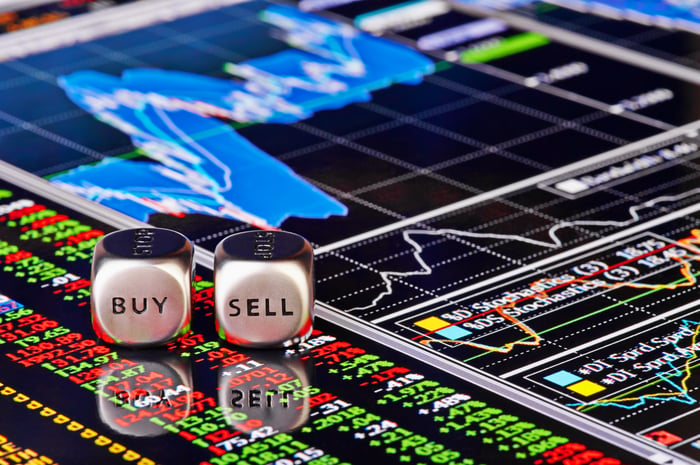 Baidu's revenue rose 1% year over year last quarter, marking its first quarter of growth in three quarters. But its online marketing revenue, which accounted for 72% of its top line, still dipped 1% and marked the business' sixth straight quarter of declines.

However, Baidu expects its total revenue to rise 4% year over year at the midpoint of analysts' estimates in the fourth quarter, which implies its online marketing business could return to growth at the end of the year and throughout 2021.

Baidu expects its mobile app's Smart Mini Programs, which lock in users like Tencent's WeChat Mini Programs, along with new managed pages for businesses and the broader recovery of China's economy, to feed that growth. It also expects its takeover of JOYY's YY Live streaming platform to diversify its core business away from ads.

That outlook is encouraging, but investors should recall that other major advertisers (including Tencent) outperformed Baidu during the pandemic by attracting advertisers across the video game, e-commerce, and online education sectors to offset their loss of ad revenue from other sectors. Therefore, I'm not sounding an all-clear on Baidu's ad business until I actually see a quarter of positive growth.

China's new antitrust rules will limit how much personal data tech companies like Alibaba, Tencent, and Baidu can gather. This could impact Alibaba's marketplace listings, Tencent's WeChat ad network, and Baidu's targeted ads. They'll also prevent dominant e-commerce marketplaces like Alibaba from locking in merchants with exclusive deals. Those new restrictions could actually hurt Baidu as it tries to fix its ad business.

Baidu wasn't hit with any fines, but Alibaba and Tencent's setbacks probably won't help it. Instead, that scrutiny could force Alibaba and Tencent to abandon their rumored interest in buying Baidu's streaming video unit iQiyi ( IQ 0.33% ).

If Baidu could sell a controlling stake in iQiyi, which generated weak growth in recent quarters, its margins could improve (since iQiyi is unprofitable), and it could generate fresh cash for new investments. But now those talks have reportedly stalled out -- which indicates the antitrust rules could actually harm Baidu instead of helping it.

What about the new buyback plan?

In May, Baidu announced it would buy back $1 billion in shares through July 2021. It increased that plan to $3 billion in August and extended it through the end of 2022, and raised the limit again to $4.5 billion this month. That amount might sound impressive, since it equals about 7% of Baidu's market cap, but it isn't actually obligated to buy $4.5 billion shares -- it's just a target, which could change over time.

Baidu repurchased about $2.0 billion in shares over the past two years, which reduced its number of outstanding shares by about 2%, but that didn't prevent its stock from hitting multi-year lows earlier this year: 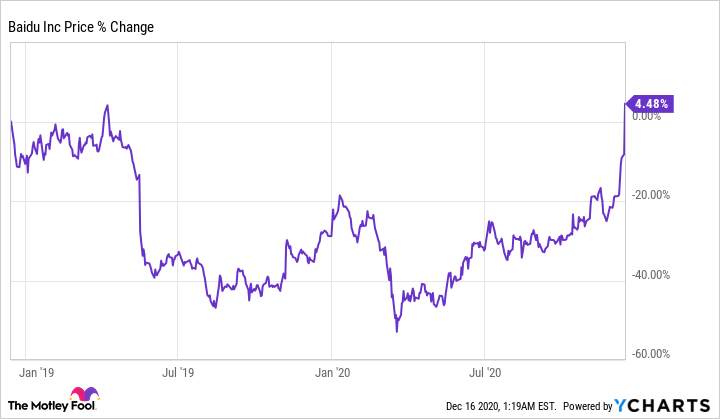 Baidu's buybacks were well-timed in retrospect, but investors shouldn't assume they'll support a rally on their own. Nonetheless, its stock still looks cheap at three times next year's sales and 17 times forward earnings -- so it could be a great time to cancel out more shares.

Lastly, investors shouldn't read too much into Baidu's rumored plans to produce electric cars with Chinese automakers like Geely, GAC Group, and FAW. Joint ventures with these companies would complement its driverless efforts, but they probably won't generate meaningful revenue or reduce its dependence on its core advertising business.

Instead, investors should hope Baidu doesn't start mass-producing its own electric vehicles -- it's a capital-intensive business that would crush its operating margins.

So is it time to buy or sell Baidu's stock?

Baidu won't grow as rapidly as Tencent and Alibaba anytime soon, but it isn't doomed to become an also-ran in China's crowded tech sector. Selling Baidu's stock just as its core advertising business gradually recovers would be a mistake, especially as it repurchases more of its own shares at low valuations. Therefore, I believe nibbling on Baidu's stock right now makes more sense than selling it.