In a move that has become all too familiar, Facebook (NASDAQ:FB) has noticed an upstart social media app that is gaining traction and wants to take a bite out of the smaller company's growth. The dominant social media network has deployed this playbook countless times over the years, oftentimes attempting to acquire a promising new start-up while simultaneously threatening it by competing through copying.

The latest target is Cameo, an app that allows users to pay celebrities to deliver personalized messages. 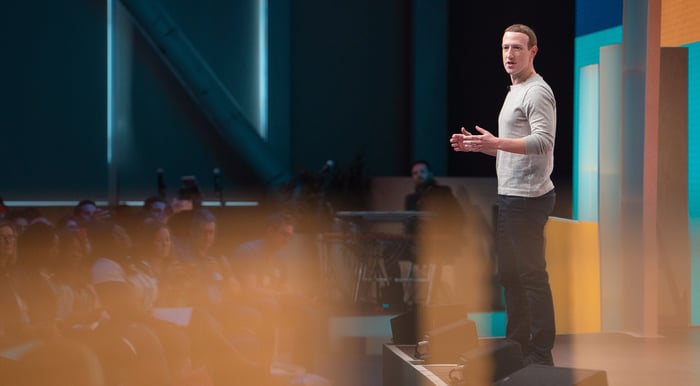 Bloomberg reports that Facebook is developing a new feature called Super, which very closely resembles what Cameo does. Super will allow content creators or celebrities to host virtual events where the audience can send tips or digital gifts. Viewers will also be able to pay for the privilege of appearing directly in the event's livestream, according to the report.

Facebook's New Product Experimentation (NPE) team is said to be behind the app's development. That division was created over the summer of 2019 with the explicit task of testing out new ideas, and the team is reportedly working on apps that basically compete with everyone. The social networking tech giant has made it clear that NPE is a riskier endeavor and won't hesitate to shut down apps that fail to gain traction. Several apps have already been shuttered, most recently including Hobbi and Lasso, which were trying to replicate Pinterest and TikTok, respectively.

Founded in 2016, Cameo connects celebrities with fans, who can pay for personalized videos and messages. The celebrity sets the price, with the start-up taking a 25% cut of all transactions. Users can request that the celebrity perform specific actions or say certain things, and clips -- such as a recent Cameo of UFC announcer Bruce Buffer breaking up with a user's girlfriend -- often go viral  on social media.

The company had raised $50 million last summer in a Series B funding round at a $300 valuation, according to Axios. Cameo's popularity has surged during the COVID-19 pandemic, as the platform is a way for people to connect virtually while staying at home. As a small private company, Cameo does not regularly disclose many details around its business but has said it facilitates hundreds of thousands of interactions per month.

With that type of booming demand, it's no surprise that Facebook wants to jump into the niche. Considering Facebook's history, it wouldn't even been surprising if the juggernaut was interested in acquiring Cameo. However, Facebook's strategy of acquiring upstarts that could one day grow to become viable competitors is under extreme scrutiny right now -- the FTC and state attorneys general have just sued the company, alleging that it has built an illegal monopoly by buying up the competition.

The legal complaints call for Facebook to be broken up, specifically from Instagram and WhatsApp, both of which were acquisitions. Attempting to acquire Cameo would just stoke further criticisms at exactly the worst possible time. In all likelihood, Facebook will simply try to copy Cameo and quietly shut down Super a few months after it launches when it fails to make a dent in Cameo's growth.