Please ensure Javascript is enabled for purposes of website accessibility
Log In Help Join The Motley Fool
Free Article Join Over 1 Million Premium Members And Get More In-Depth Stock Guidance and Research
By Evan Niu, CFA – Feb 15, 2020 at 8:00AM

What took it so long?

For a company that has established a reputation for shamelessly copying its competitors, it's a little confounding that it's taken Facebook (META -0.54%) this long to replicate Pinterest (PINS 0.47%). Last summer, Facebook created a New Product Experimentation (NPE) team in order to explore new ideas. The team has only released three apps thus far, although Facebook is reportedly interested in entering a broad swath of categories like podcasts, newsletter tools, and travel planning, among others.

NPE's fourth app is Hobbi, which is a clear Pinterest copycat. 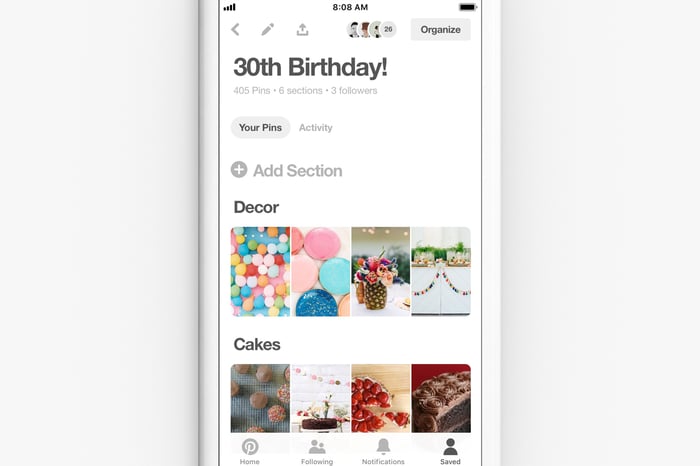 Hobbi allows users to take pictures of and organize creative projects and activities. Users can also create videos of completed projects which can then be shared with friends and family. The app doesn't directly integrate sharing on social networking platforms, so any sharing must be done manually.

That's slightly different from Pinterest's primary use case, which is creating and discovering collections of ideas -- Pinterest calls its platform a "visual discovery engine" -- but it's still similar enough to rattle investors. Shares of Pinterest, which went public less than a year ago, fell on news of Hobbi's release. While Facebook already has a highly visual platform in Instagram, that service is more targeted at mainstream appeal.

More broadly, Pinterest is particularly popular among hobbyists and DIYers, and the company has been enjoying strong user growth. Monthly active users (MAUs) grew to 335 million at the end of the fourth quarter, with most of those new MAUs coming from abroad. Facebook and Google are expressing clear interest in catering to DIYers, which could potentially eat into Pinterest's MAU growth.

Facebook has been upfront that it expects "many failures" from the NPE team, and that users should expect rapid iterations, as well as the possibility that any new app could be shuttered at any time. NPE's first app, a meme creator app called Whale, has already been shut down, for instance. If Hobbi fails to gain traction, Facebook won't hesitate to kill it off in short order.

Pinterest has been enjoying strong growth, with revenue jumping 46% last quarter to $400 million, although the company remains unprofitable. The smaller social media player has warned that larger rivals may replicate its offerings: "Our competitors have previously and may continue to develop technology, products, services or interfaces that are similar to our existing and future products quickly and at scale, or that achieve greater market acceptance than our products."