Please ensure Javascript is enabled for purposes of website accessibility
Free Article Join Over 1 Million Premium Members And Get More In-Depth Stock Guidance and Research
By Will Healy - Dec 20, 2020 at 10:20AM

The company is unlikely to deliver for investors.

However, despite this early momentum, I do not see a scenario in which I will buy DoorDash stock. This is not because the consumer discretionary company lost some of its gains in subsequent trading days following the Dec. 9 IPO.

I made this determination, because in the end, stocks thrive on expanding profits, and DoorDash offers no obvious path to continuous earnings growth. Although the company provides a valuable service, it appears destined to struggle as a low-margin operation.

The competitive nature of food delivery

Admittedly, the company's successes could leave readers wondering why I adamantly want to avoid this stock. The company revealed that over one million drivers -- or "Dashers" -- deliver meals and products from more than 390,000 merchants to approximately 18 million customers. DoorDash also leads the industry with a market share of 51%, according to Second Measure. 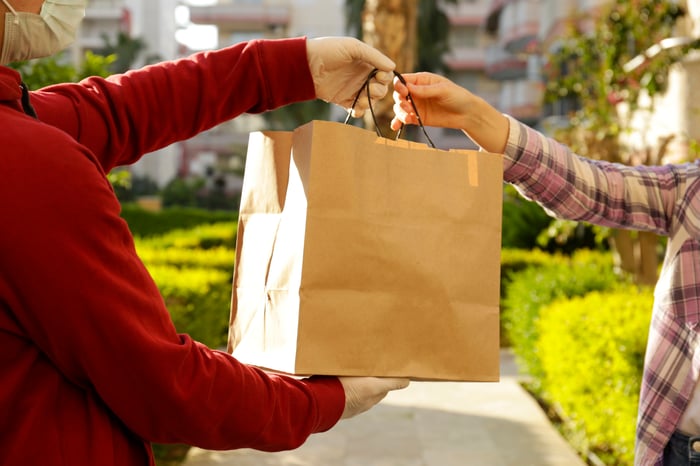 Nonetheless, it will have to fight hard to keep that market share. Rideshare giant Uber directly competes in this business through its Uber Eats division. Grubhub ( GRUB ) and Deliveroo are among its other peers.

Also, the industry continues to consolidate. Last year, DoorDash took over Caviar. In 2020, Uber Eats bought Postmates, while Just Eat Takeaway.com and Grubhub merged. With this level of consolidation, a drive to win more market share could put significant pressure on margins.

To see how the rising competition can take its toll on earnings, investors have to look no further than Grubhub, which was the leading food delivery company until last year. Starting around 2017, the company's expenses increased faster than its revenue. Consequently, the company recorded an operating loss of just over $6 million in 2019, breaking a years-long streak of profitability.

Its financial situation has only worsened since then. In the first nine months of 2020, Grubhub reported almost $112 million in operating losses. The fact that the two biggest pure plays in the industry cannot earn an operating profit bodes poorly for food delivery stocks.

The difficulty of achieving and sustaining profitability

However, amid this backdrop for the industry, DoorDash did see some improvement in 2020.

In the first nine months of this year, the company booked just over $1.9 billion on its top line, more than triple year-ago levels. This drove cost of revenue to nearly $900 million, and additional costs such as sales and marketing and general and administrative expenses translated into ongoing operating losses for the company.

Still, gross margin improved to 53% in the first nine months of the year, up from 40% in the same stretch of 2019. And the loss from operations shrank from $479 million to $131 million year over year.

This trend likely bolstered the optimism of DoorDash shareholders -- such improvements indicate the possibility that DoorDash could turn a profit if the company can continue to grow its scale.

Unfortunately, the boost in revenue came in large part from a phenomenon that (hopefully) will not last long term: COVID-19. As people stayed home and hunkered down during the pandemic, they turned to DoorDash and peers like Grubhub for meals delivered to their doors.

Now, as the first shipments of vaccines are administered across the world, the pandemic's end is in sight, and a return to old routines would also mean the return of more moderate demand and reduced profitability for this industry.

Why a potential cost-cutting solution may not work

One cost that drives these losses is labor. Though the company does not specifically break out labor costs, it pays Dashers $2 to $10 (or more) for deliveries, not including promotions.

DoorDash and its peers have looked at reducing this cost in a tech-savvy way -- with the help of autonomous vehicles. Some have described self-driving cars as a key to industry profitability in the adjacent ridesharing industry as well. To this end, DoorDash has partnered with General Motors' Cruise Automation. Last year, they tested driverless vehicles in the San Francisco market.

Still, it remains unclear when DoorDash would offer such services on a wide scale. The recent launch of a robotaxi by Amazon's Zoox could indicate more self-driving cars will be on the roads in the foreseeable future. However, widespread adoption will more than likely take years if not decades.

Moreover, Dashers are not only drivers. They must also pick up orders inside a business and deliver them to the recipient's door. Thus, even if autonomous vehicles can reduce labor costs, the company would have to offer a lower level of service with such a strategy.

As the market saw with Grubhub, the fight for market share among food delivery platforms takes a serious toll on the bottom line. And without a once in a century event boosting demand for delivery and takeout, the path for DoorDash going forward will be more difficult than what recent results indicate.

For the stock, that could mean that the first day of trading was its first and last hurrah. Such conditions all but guarantee DoorDash stock will stay on my "never buy" list.