Please ensure Javascript is enabled for purposes of website accessibility
Free Article Join Over 1 Million Premium Members And Get More In-Depth Stock Guidance and Research
By Lawrence Nga - Dec 21, 2020 at 9:44AM

Investors should not risk their hard-earned cash on Tesla stock.

One of 2020's hottest stocks is Tesla ( TSLA -6.42% ), which is up a mind-blowing 800% year to date. Investors are clearly upbeat about Tesla's rising electric vehicle (EV) deliveries and its inclusion in the S&P 500 for the first time.

But I'm not here to cheer for the stock. Instead, I'm going to be the bad guy by highlighting two obvious risks Tesla bulls have either neglected -- or chosen to ignore.

1. Tesla is not the only game in town

The end of gasoline-fueled cars as a major industry draws closer every year. Battery technology is improving, making EVs cheaper than ever. Concerns over global warming, meanwhile, have led to government support for electric cars -- at the expense of fossil fuel vehicles. 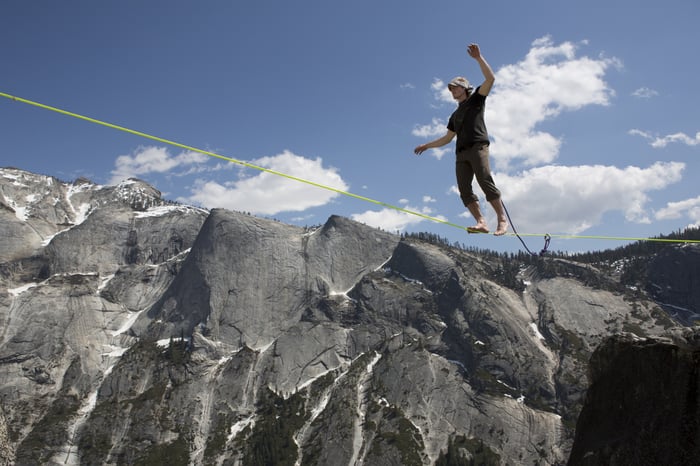 As an industry pioneer, Tesla's well-positioned to ride growing electric vehicle demand. In 2019, Tesla sold a record 367,500 units, about 18% of all electric car sales. If Tesla holds on to its market share, it could become the No. 1 player globally.

But while Tesla has had a headstart, it's far from being the dominant EV player.

For one, Tesla faces serious competition from the likes of China's BYD ( BYDD.F -3.71% ), which has sold EVs since 2008 and makes its own battery. According to popular EV blog Electrek, Tesla's and BYD's sales have been neck-and-neck for years.

BYD -- which counts Warren Buffett as a major backer -- is benefiting from China's low-cost engineer workforce as well as government support for EVs. And BYD's newest model -- the Han -- goes head-to-head with Tesla's best-selling Model 3 in terms of price and range.

Meanwhile, traditional automakers like Toyota, Volkswagen, and General Motors are not sitting still. For instance, Toyota recently said it's making a 310-mile-range electric car that takes just 10 minutes to reach a full charge.

Tesla's success has also fueled the rise of a new generation of electric carmakers. This includes Nio ( NIO -11.19% ), XPeng ( XPEV -9.30% ), and, more recently, Arrival. According to a recent Bloomberg article, Arrival -- which is backed by Fidelity and BlackRock -- plans to build 31 EV plants around the world by 2024.

As more and more automakers -- old and new -- charge into the EV industry, there's a good chance we'll end up with a fragmented market, not unlike the traditional auto industry. That is bad news for Tesla's 18% market share.

Tesla is probably the most expensive carmaker that has ever existed.

Tesla's fans argue that traditional carmakers will never catch up. They point to the fact that Tesla is not just a first-mover in electric cars, but also in autonomous cars. And with Tesla now entering the software-driven ride-sharing industry, it should be valued like a technology company -- not a car manufacturer. Or so the bulls say.

To their credit, the bulls are right that Tesla is not just a car manufacturer. It has a renewable energy business, and it has plans for an autonomous ridesharing network. And whether you love him or hate him, CEO Elon Musk has proven -- through success stories like PayPal and SpaceX -- to be one of the most visionary businesspeople of our time.

But investors have also thrown caution to the wind. Many of Tesla's new ventures are still at early development stages -- and there's no telling how they'd turn out. Similarly, while he's a capable leader, that's no guarantee Musk will always be successful.

Should investors risk their hard-earned cash on Tesla?

There is no doubt Tesla is one of the world's most interesting companies. By leading the charge into electric cars, renewable energy, and other potentially disruptive industries, Tesla's given investors plenty of room for imagination.

But it is also this sheer imagination driving Tesla shares to trade at over 20 times trailing revenue. To put things into perspective, General Motors -- a leading car manufacturer -- trades at less than 0.5 times revenue.

Frankly, I have no idea what Tesla will become over the next decade. Will it be a leading electric carmaker or a major player in renewable energy and mobility? Should Tesla turn out to be the latter, its current price might be justifiable. Otherwise, we could see a severe contraction in valuations.

A key question to ask is: Should investors risk their hard-earned cash on well-told stories that may or may not materialize? My answer is a resounding no.

Why Tesla Launching a Cyberquad for Kids Is Genius

Why Tesla Stock Surged Even Higher on Wednesday