Empire State Realty Trust (NYSE:ESRT) is a real estate investment trust, or REIT, focused on office properties. It owns the iconic Empire State Building in Manhattan, as well as 13 other office properties in the New York City area. It has about 9.4 million rentable square feet of office space and another 700,000 square feet of retail space. In addition, the company operates the observatory atop the Empire State Building, which had just completed a multiyear renovation before the pandemic.

Both office and retail real estate have been hit hard by the pandemic, especially in New York City. Hardly anyone is working in offices right now, and retailers have been subject to long shutdowns followed by restrictive reopening procedures. While the observatory has been a must-see tourist attraction for decades, the company has reported traffic at about 4% of prior-year levels since reopening earlier this year.

The stock has performed tremendously since early November, when positive vaccine data started to trickle out. It's easy to understand why. An end to the COVID-19 pandemic would mean people could work in offices again, shop at stores, and ride those high-speed elevators up to the roof of the Empire State Building, which is ordinarily a fantastically profitable business for the company. 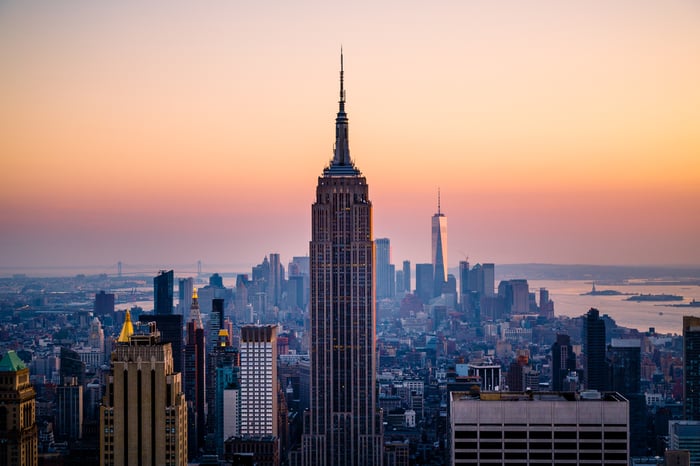 Why could Empire State have more upside ahead?

It's important to point out that even though Empire State Realty Trust has risen by 68% since the first positive Pfizer (NYSE:PFE) vaccine data was released on Nov. 9, the stock is still down by 34% in 2020. There's a good reason. While the end of the pandemic is in sight, there's a lot of uncertainty about when the economy will return to normal.

I've said before that I think the end of the pandemic will come in three stages from an investor uncertainty perspective:

In Empire State's case, I'd also add in the work-from-home uncertainty. There's a lingering fear in the markets that because millions of people are working from home, the need for office space is going to rapidly decline in the post-pandemic years.

I don't buy it. Several studies have found that while most people want the ability to work from home, few want to work exclusively from home. This is true even in tech-heavy industries. Both Facebook (NASDAQ:FB) and Amazon (NASDAQ:AMZN) have recently leased new office space in New York City. A recent survey by Slack (NYSE:WORK) of 3,000 knowledge workers found that only 12% want to work from home full-time, while 72% prefer a hybrid arrangement.

To be clear, I think 2021 could be a great year for Empire State Realty Trust, as well as most other so-called "reopening" stocks that stand to gain from the gradual end to the COVID-19 pandemic.

However, that's not why I own Empire State. Even if it does tremendously well in 2021, I don't plan to sell a single share. A real estate investment trust like this is designed to produce predictable, growing income and strong total returns. Once the pandemic comes to an end, Empire State can get back to doing just that -- year after year.