"It's the most magical time of the year," the classic holiday songs goes. Historically speaking, it's also the most Magic Kingdom time of the year for Disney (NYSE:DIS). These next two weeks are peak season for the world's largest theme-park operator, but things aren't going exactly to plan. The COVID-19 outbreak has naturally tripped up some of the holiday cheer.

Most of the gated attractions at Disney-owned theme-park resorts are actually closed right now. Only Disney World in Florida, Shanghai, and Tokyo are entertaining visitors right now. Disney owns a 43% stake in Shanghai Disneyland. It doesn't own Tokyo Disney, simply collecting licensing fees for a thin piece of the revenue.

Will this be enough to turn Disney's flagship theme-parks business around this season? You're probably not going to like the answer as much as you liked the season finale of The Mandalorian over the weekend. 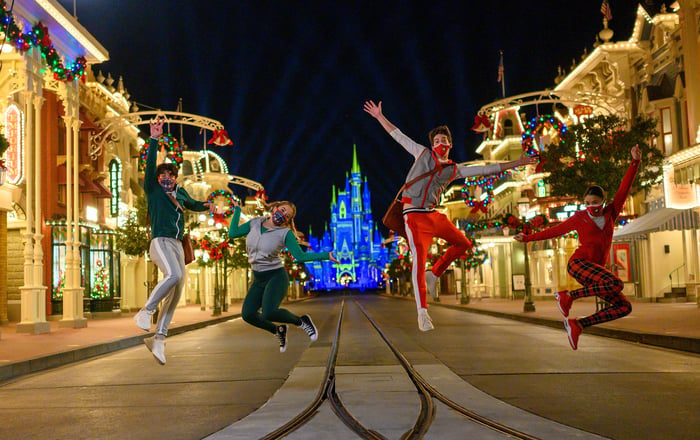 It's a small, small world

The original Disneyland theme park in California has been closed for more than nine months and there are no indications it will be back in business anytime soon. Disneyland Paris was open for a few months during the summer and early fall but closed in late October. The French resort won't reopen until February at the earliest. Disney also has a substantial minority interest in Hong Kong Disneyland, a resort that thrives on a different holiday calendar -- but it closed for the third time this year on Dec. 2.

The parks that are open aren't exactly firing on all cylinders. They're operating on strict guest-count caps, and travel restrictions are eating into the number of lucrative visitors that would historically flock to the flashy family friendly destinations. Locals don't spend as much money at the parks as do out-of-town guests because the latter don't visit as often.

Disney shares are hitting all-time highs this month, but it's not the theme parks driving the surge in investor interest. The company is a bellwether among media stocks, and right now, it's the breakout success of Disney+ that's fueling the euphoria on Wall Street U.S.A.

It's been a rough couple of quarters for Disney's theme parks. Revenue for the segment -- which also includes Disney's cruise-line business that has been completely shut down since mid-March and its consumer-products arm that's meandering in the face of a global recession -- plummeted 85% for the fiscal third quarter that ended in June. It improved to a 61% decline in the subsequent quarter.

The current quarter won't necessarily keep the mouse steps moving in the right direction. Disney World is busy right now, but not as guest-packed as it was a year earlier. The year-over-year comparison will sting. The two parks in Paris were only open for less than a month this quarter.

There are signs of life in the parks that are allowed to show signs of life. Disney World bumped its capacity from 25% to 35%, and even then it's had to turn potential customers away this season. The resort's massive Disney Springs open-air shopping, dining, and entertainment complex is routinely closing to capacity this month. Disney Springs is also restricting guest counts, and chunks of its two primary parking garages are being cordoned off for temperature and security screenings. However, seeing the registers ringing at Disney Springs is encouraging.

The year ahead should be kinder for Disney World, assuming the race for widespread vaccinations hits the pandemic finish line before another Florida lockdown. Disney World is now selling pricier park-hopper tickets for guests visiting in 2021. Foreign travel restrictions will ease as the COVID-19 threat ideally starts to fade if the vaccinations are successful.

The Disney brand itself has gotten stronger, and that's only creating pent-up demand. This holiday season won't be enough to show material year-over-year improvement for Disney's fiscal first quarter, but the recovery should happen a lot quicker than many pessimists think in the latter half of next year.