Daniel Foelber
(TMFpalomino2)
Author Bio
Daniel has been writing for Fool.com since 2019. A fan of value and dividend stocks, he covers the industrial sector, oil and gas, and renewable energy. He graduated summa cum laude from the University of Houston with a BBA in finance and marketing and a certificate in personal financial planning.
This article represents the opinion of the writer, who may disagree with the “official” recommendation position of a Motley Fool premium advisory service. We’re motley! Questioning an investing thesis -- even one of our own -- helps us all think critically about investing and make decisions that help us become smarter, happier, and richer.

The turbulent ride of 2020 is finally coming to a close. Whether you had a market-beating investment year, did OK, or had a year you'd rather forget, now is the time to look ahead toward 2021.

The energy sector is full of high-risk companies that are probably worth avoiding. But there are buys if you know where to look. Array Technologies (NASDAQ:ARRY), Dominion Energy (NYSE:D), and Kinder Morgan (NYSE:KMI) are three completely different companies that offer favorable risk/reward profiles in solar, wind, and income investing (respectively). Here's the rundown on each so you can choose what's best for you. 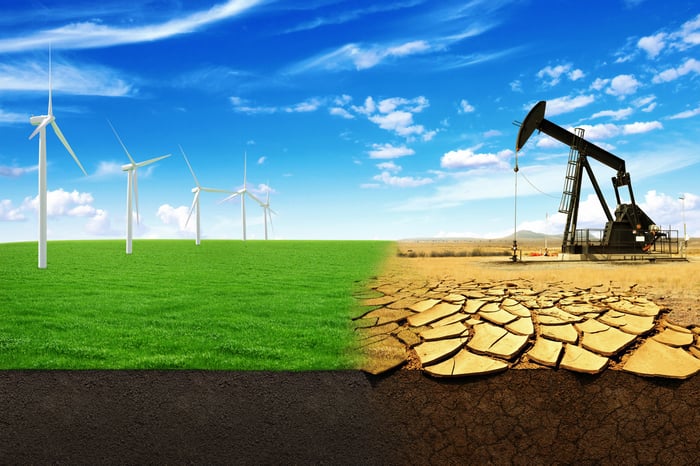 Let's start with the riskiest stock on this list -- Array Technologies. Array had its IPO in mid-October. By the end of November, shares were up over 50% but Array has sold off a little since then.

Array has been around for over 30 years, honing its craft in the solar tracking industry. Array's single-axis trackers clamp on to solar panels and help them follow the sun throughout the day. Over the years, Array has grown into a market leader in this field and notes that its trackers are used in more than 25% of U.S. solar modules.

Array delivered impressive results during its first quarterly conference call as a public company. Comparing the nine months ended 2020 to the same period last year, it increased revenue by 64% and nearly doubled adjusted EBITDA. It hopes to translate its U.S. success to the global stage by taking its product international and gaining market share in the U.K, Spain, Brazil, Mexico, China, and Australia.

The solar sector as a whole has absolutely crushed the market in 2020. Many industry leaders are now trading at potentially dangerous record highs and could face dark days ahead. 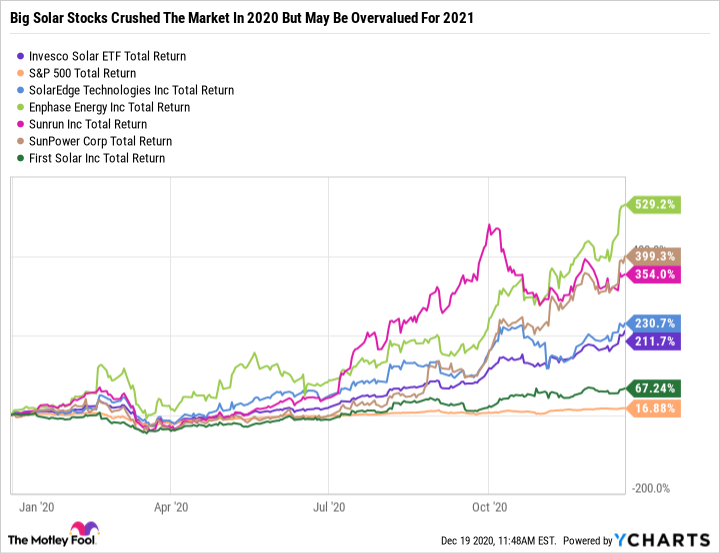 Investors looking for solar opportunities in 2021 will be hard-pressed to find anything that is truly "cheap". But Array looks to be one of the best options on the market today. In 2019, it grew revenue by over 120% compared to 2018. Its forecasting to finish 2020 with revenue of $855 million, which would be 32% more than an already strong 2019. It lost money in 2018 but turned profitable in 2019, reporting $122 million in adjusted EBITDA and $77 million in adjusted net income. Array is guiding for $158 million in adjusted EBITDA for 2020 -- 30% higher than 2019. These top and bottom-line growth rates are impressive, especially considering 2020 has been a somewhat low growth year for the industry.

Array's valuation is also reasonable. Using its full-year 2020 guidance, it would have a price to sales (P/S) ratio of 6.6 and an EV to adjusted EBITDA ratio of 35.4, which is cheaper than other high growers in this industry like SolarEdge Technologies and Enphase Energy but more expensive than slower growers like First Solar. If Array can grow its top and bottom line at a similar pace as it did this year, it could end up being one of the best performing solar stocks in 2021.

Dominion Energy is a utility that's making some bold investments into wind energy. But Dominion has struggled this year. In the second quarter, the company reported its largest quarterly loss in history due to impairments related to its failed Atlantic Coast Pipeline project. It also cut its dividend by 33%.

Bruised and battered, Dominion is looking for a new beginning that starts with offshore wind energy. Offshore wind is a growing subsegment focused on cherry-picking some of the ocean's most favorable conditions for harnessing wind energy. In 2013, Dominion acquired a 112,000-acre lease 26 miles off the coast of Virginia. It used that lease to run a 12MW test project, the success of which has led Dominion to file a permit for a 2.6 GW, $8 billion full-scale project using its lease. It will be one of the largest offshore wind projects in the world and is expected to go into service in 2024.

As exciting as Dominion's prospects are, it's important to realize that wind energy isn't contributing to its performance yet. 85% to 90% of its earnings come from state-regulated utility operations such as electric distribution, transmission, generation, gas distribution, and renewable natural gas. However, Dominion expects to be able to grow earnings by 6.5% and its dividend by 6% starting in 2021. This forecast includes up to $47 billion in zero-carbon power generation and storage, meaning it expects renewable investments to contribute to profitability.

In terms of an energy mix, Dominion is expecting to go from nearly 100% fossil fuel-based power projects to a more diversified approach that includes about 5.2 GW of offshore wind by 2035 and 16 GW of solar/onshore wind by 2036.

Dominion's renewable portfolio isn't established. And the company as a whole has endured heavy losses as of late. But its stock is down and its dividend still yields 3.3% -- even after the cut. Investing is about looking ahead, not backward. And Dominion seems to be on the right track toward integrating profitable regulated and contracted renewable investments into its portfolio, potentially giving investors dividend and earnings growth for years to come.

If 2020 was Dominion's year of reckoning, then 2015 was Kinder Morgan's. Between 2010 and 2015, the company nearly tripled its long-term debt just in time for one of the most brutal oil crashes in recent history. In response, Kinder Morgan slashed its dividend by 75% at the end of 2015.

Since then, it has spent the last five years converting its business model from using debt to fuel growth to running a lean operation that generates free cash flow (FCF) to support the dividend. With a yield of 7.4%r, income investors are probably more than happy with this business strategy. Kinder Morgan's long-term fee-based and take-or-pay contracts provide over 90% of its FCF. As such, its earnings have remained largely insulated from the 2020 downturn.

Investing in Kinder Morgan is basically a bet that the company is stable enough to afford its high-yielding dividend. Considering its performance and management's remarks regarding the company's long-term strategy, it seems well-positioned to sustain and maybe even grow its current dividend. If that's the case, then Kinder Morgan can be used to generate a nice stream of income without having to sell any shares. However, its lack of earnings growth means that investors shouldn't count on the stock for much else.

Array Technologies, Dominion Energy, and Kinder Morgan offer you varying risk/reward profiles so you can choose whichever option is best for you. Watch to see if Array can continue growing at a good rate and whether it's making international progress. Dominion is basically giving itself a fresh start in 2021, so it would be wise to monitor if it can stick to the plan of growing earnings and its dividend while ramping renewable investments. As for Kinder Morgan, ignore its stock price and just make sure it's generating enough FCF to fund its dividend while avoiding additional debt.