Please ensure Javascript is enabled for purposes of website accessibility
Free Article Join Over 1 Million Premium Members And Get More In-Depth Stock Guidance and Research
By Reuben Gregg Brewer - Dec 29, 2020 at 10:07AM

NextEra Energy looks like it's positioned to lead the utility industry into a bright new future, but does that make it a stock worth buying?

The utility industry is shifting in a new, cleaner direction, and NextEra Energy ( NEE 1.31% ) appears poised to be a leader. That's great news for investors looking to play this key industry transition, but there are some important issues to consider before you buy in. Here's a primer on NextEra Energy to help you decide if it's a buy or not.

The most exciting thing about NextEra Energy today is the U.S. utility's renewable power business. Its somewhat boringly named NextEra Energy Resources division happens to be one of the largest solar and wind power companies on planet Earth. It has 24 gigawatts of renewable capacity today, with its 16 gigawatts of wind (67% of its portfolio), 3 gigawatts of solar (13%), and 3 gigawatts of nuclear (11%) acting as the backbone of a broader clean energy portfolio.

Better yet, it has signed contracts to build another 12 gigawatts of solar and wind power in its backlog of work waiting to be completed. It is also moving aggressively into the energy storage space, which is a complimentary renewable power technology. According to NextEra, its "renewables backlog is larger than the operating wind and solar portfolios of all but two other companies in the world." This business is big today, and is likely to keep driving the company's growth for years to come.

NextEra Energy Resources would be a pretty exciting investment opportunity on its own, but it's only part of the story, because it sits atop the utility's traditional electricity business. NextEra owns Florida Power & Light, the largest electric utility in Florida, and Gulf Power, another Florida utility that it recently acquired from The Southern Company. The Sunshine state has long benefited from people moving to its warmer climate, and that's expected to continue for the foreseeable future (low taxes help on that score, too). An expanding population means more customers, and more opportunity to grow this core business.

All in all, NextEra is a mixture of a "boring" traditional utility with solid growth prospects and an exciting fast-growing renewable power business.

A lofty price and other risks

Even more compelling is that NextEra expects this combination to drive earnings growth of between 6% and 8% through 2023. Dividend growth, meanwhile, is expected to be as high as 10% per year through 2022. That's roughly on par with the company's incredible historical dividend growth of roughly 10% per year over the past decade. This has been a very rewarding investment option for dividend investors.

But that brings up one major fly in the ointment here. Investors are well aware of NextEra's success and its prospects for the future. Using dividend yield as a rough guide for valuation provides a troubling picture: NextEra's yield is roughly 1.9%, a little higher than what you'd get from an S&P 500 Index fund, but a full percentage point lower than the yield offered by the Vanguard Utilities ETF, a proxy for the industry. Even worse, that 1.9% also happens to be near the lowest levels in NextEra's history. 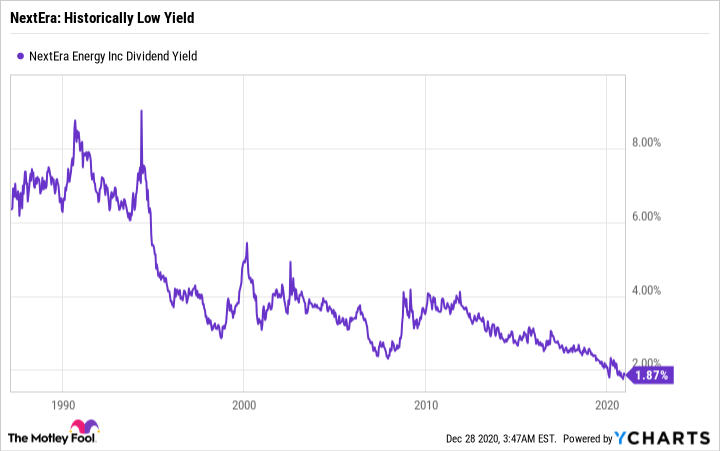 Put simply, Wall Street has priced in a lot of good news here. There is a risk that NextEra can't live up to those expectations. For example, the company's payout ratio has increased from from roughly 45% to around 70% over the past decade. The outsize dividend growth over the past 10 years was partially supported by the increasing payout ratio. It will be much more difficult to live up to the historical growth rate of the past, noting that earnings growth is only projected to be 6% to 8%. If dividend growth starts to slow and track more closely to earnings, investors may decide the current premium is unwarranted.

There's other issues to consider, as well. For example, while renewable power is a growth business, it isn't the only way in which the world is going green. Energy conservation, via things like more efficient lighting, for example, could restrain long-term electricity demand. Although 2020 is an odd year, thanks to the pandemic, overall U.S. demand fell between 2018 and 2019. If that trend were to continue, NextEra's core utility operations might not grow as fast as expected. And then there's the slowing U.S. population growth rate, which could reduce demand, as well. While Florida has seen net resident inflows, a shift in the larger trend could easily trickle down to the state level and reduce the company's growth rates. NextEra has a strong industry position, but it's hardly set in stone forever.

There's things to consider on the renewable power side, as well. For example, in early 2019, The Southern Company noted that the risk/reward on renewable power deals was shifting in an undesirable direction. Lesser quality customers were showing up and deals were getting done at lower rates of return. Southern chose to pull back. Although there appears to be plenty of growth ahead in the renewable power space, if the profitability and counter party risk change, NextEra's growth might not live up to the current lofty expectations.

If you are looking to add a utility with robust dividend growth prospects, NextEra could be a solid option, as long as you go in knowing you are paying a premium price for that dividend growth. If the company doesn't live up to Wall Street's expectations the premium could get trimmed. Notably, that's something that could happen even if the growth is still strong relative to peers, but lower than historical trends.

Dividend investors looking to maximize current income and those who care about valuation, meanwhile, will probably want to look elsewhere. NextEra is indeed a great company, but the price tag is pretty steep today even in a best case scenario, and that means it is not an appropriate stock for all investors.