On Dec. 16, Aphria ( APHA ) and Tilray ( TLRY ) announced plans to merge in an all stock transaction that would create a company with pro forma combined revenues of almost $685 million, pushing past the sector's current leader, Curaleaf ( CURLF -0.65% ).

This transaction will produce a current market capitalization for the new Tilray around $3.2 billion, placing it second among exchange-traded cannabis companies after industry leader Canopy Growth ( CGC -3.57% ) at $9.6 billion and just ahead of Cronos Group ( CRON -5.46% ) at $2.6 billion. If you haven't gotten in on the action yet, is now the time? 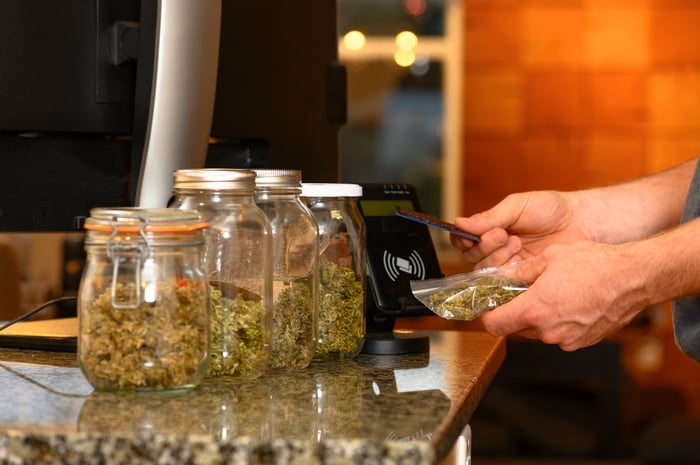 To be clear, the driving force behind this merger is the potential for cost reductions and synergies. The joint press release announcing the deal made this clear in its headlines: "Robust Supply Chain and Operational Efficiencies Expected to Generate Approximately CA$100 Million of Pre-Tax Annual Cost Synergies within 24 months."

This statement gets to the heart of a key challenge facing the entire cannabis industry: Hundreds upon hundreds of companies of all sizes are chasing an elusive but growing marketplace for recreational marijuana that is still dominated by off-market dealers. Industry consolidation must take place to rationalize all this capacity. Mergers, which can lead to reduced costs, are one way to attempt to achieve consistent profitability for shareholders.

While neither Aphria or Tilray is currently profitable from an accounting standpoint, the new entity does possess a solid balance sheet with pro forma debt of $816 million partially offset by cash reserves of $454 million. This gives them adequate access to the capital markets as they pursue future growth initiatives in their quest to achieve lasting profitability.

As of this writing, the stock market has taken a mixed and muted reaction to the deal, reflecting the dilemma over whether bigger is better in all cases. On the day prior to the announcement, Aphria closed at $8.12 per share, and then closed almost unchanged at $8.06 per share post-announcement. Today the stock sits at $6.82.

Tilray, on the other hand, closed on Dec. 15 at $7.87 per share and rocketed up to close at $9.33 per share (up 18.5%) the following day. Today, Tilray has dropped back to $8.18 per share, which still represents over a 3% gain from prior to the news release. Tilray was seen as the weaker entity in this pair-up, and had the most to gain from the combination. The merger is expected to close sometime in the second quarter of 2021.

The new Tilray is looking to expand its global footprint. Both companies operate extensively in Canada and in some parts of the U.S., but it is overseas, especially in Europe, where strong growth is possible. Aphria already has an extensive presence in Germany for medical cannabis distribution, while Tilray has developed an efficient cannabis production facility in Portugal. Integration and expansion of these two facilities to better serve the European continent is likely.

Both companies have started to create a strong presence in the cannabis-infused package goods industry. In February, Tilray purchased Manitoba Harvest, which offers hemp and cannabidiol (CBD)-infused food products to 17,000 stores in North America. Later in 2020, Aphria bought Sweetwater Brewing Company, a maker of cannabis-infused craft beers and seltzers. Cross-selling of these products to their mutual distribution networks is another area of likely growth for the new Tilray.

The Green Wave is here

It won't hurt the company that there is a growing push to expand the legalization of recreational marijuana use across individual states in the U.S. The roster of states that have approved recreational use stands at 15 plus the District of Columbia, following the addition of Arizona, South Dakota, Montana, and New Jersey on Election Day.

As more states look for ancillary revenue sources to offset COVID-19-induced budgetary shortfalls, taxing cannabis sales can be a good place to start. Take Illinois, for example: Despite the nation's second-highest tax rate at 40%, sales have boomed, bringing in over $100 million in new revenue this year. In some months, cannabis tax revenue has almost equaled Illinois' liquor tax revenue despite far more limited and controlled distribution networks for cannabis.

The federal government is warming up to the idea of legalizing recreational marijuana cultivation, distribution, and consumption. On Dec. 7, the House of Representatives passed the Marijuana Opportunity Reinvestment and Expungement Act of 2019 (the "MORE" Act). Among many features, the act overturns many of the criminally related aspects of the cannabis trade, while freeing up financial companies to work with the industry via lending and banking services.

This bill now moves to the Senate, where 60 votes are required for passage. That is a huge hurdle to overcome given the current Republican control of that branch, and passage is not likely in the near term. However, President-elect Biden has signaled his approval of the MORE Act, so there are possibilities for executive orders to work around the margins to chip away at resistance.

Lastly, the U.S. stock market is rewarding concept plays with huge valuations and upward price momentum. Whether it be electric vehicle production, cloud-related technology companies, internet-connected fitness products, or cryptocurrency mining companies, there is little regard among investors to current profitability (or lack thereof).

Certainly, cannabis-related companies fit this phenomenon, although the initial euphoria phase has long passed. Yet, these stocks see sudden and significant surges in price every time a positive piece of news is received regarding the industry.

If not now, then when?

Taking into consideration all of the above, as well as the realization that the cannabis investment craze is now into its third year, a lot of the initial froth has been removed from the sector. Stock prices in many cases are now exhibiting nice long-term basing patterns at prices often 50% below prior peaks. It is in that vein that I believe the merger between Aphria and Tilray represents an attractive risk-reward proposition at current prices.