NVIDIA (NASDAQ:NVDA) has beaten the broader market handsomely in 2020, delivering big gains to investors thanks to rising interest in video games and the growing demand for data center equipment.

Such impressive gains could leave you wondering if this high-flying growth stock is still worth holding on to and if it can repeat its performance in 2021. The short answer to these questions is yes, as the catalysts driving NVIDIA's growth in 2020 are all set to amplify in the new year. Let's see how. 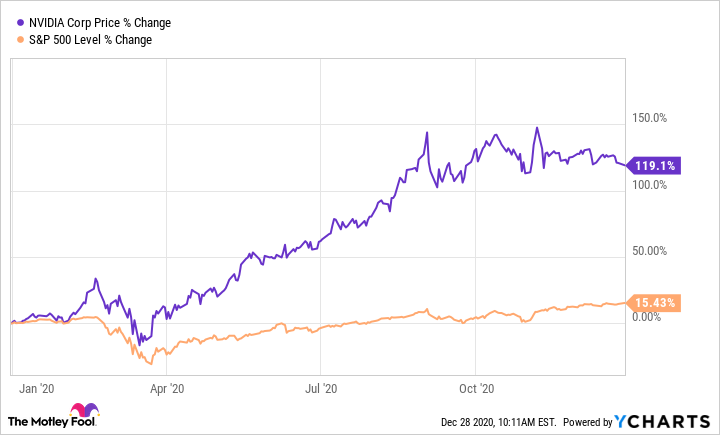 NVIDIA's biggest businesses will get better

The coronavirus pandemic couldn't rattle the NVIDIA gravy train as it saw a spike in demand for its graphics cards that are used across several applications including PC gaming and data centers.

For the first nine months of fiscal 2021 (ending Oct. 25, 2020), NVIDIA's revenue shot up nearly 50% over the prior-year period to $11.67 billion, while net income has jumped close to 55% to $2.87 billion. This is an impressive performance in a pandemic year and there are two specific growth drivers to credit for it.

First, NVIDIA's gaming business has been in fine form throughout the year. Sales of graphics processing units (GPUs) have remained strong as people stuck at home during the health crisis invested in video gaming hardware to keep themselves entertained. As it turns out, healthy graphics card demand and the lack of components has created a GPU shortage that's expected to last into the first quarter of 2021.

This means NVIDIA's gaming business could benefit from pent-up demand in 2021, especially considering that consumers are finding it difficult to lay their hands on the company's newly launched cards. NVIDIA's Ampere-based RTX 30 series cards are a huge improvement over their predecessors, delivering a big jump in performance at attractive price points. This has also made them an ideal pick for cryptocurrency miners who reportedly purchased $175 million worth of cards in the previous quarter.

Not surprisingly, NVIDIA says that demand for the new cards has exceeded supply. The good part is that the company is working to fill the supply gap. The company has reportedly placed a second production order with Samsung for its RTX 30 series GPUs as it looks to increase the availability of its new cards. Such a move should ideally help NVIDIA boost sales of its cards as there is a huge installed base of gamers who are currently on older graphics cards that may not be capable of running the latest graphics-intensive games.

As such, NVIDIA's gaming revenue could keep climbing higher in the new year. That would bode well for the company as it got 48% of its total revenue from this segment last quarter.

Favorable end-market conditions are also seen in the data center business that produced 40% of NVIDIA's revenue last quarter. In fact, NVIDIA says it is witnessing huge demand for its A100 GPUs from data center customers and it may take a few months before the chipmaker manages to catch up.

Again, this is not surprising as several big-name cloud players had lined up to buy the A100 chips when it was launched. NVIDIA had promised that the A100 could deliver significant performance gains while tackling artificial intelligence, machine learning, and high-performance computing workloads, and even brought out a more powerful version of the card.

Tom's Hardware estimates that the A100 GPU may cost north of $15,000. This indicates that NVIDIA could mint a lot of money once it manages to improve its supply chain of data center GPUs.

What's more, the market for data center GPUs has a lot of growth to offer. According to a third-party market research report, sales of GPUs accelerating data center workloads could clock a compound annual growth rate of 45.4% through 2025, hitting $16.4 billion in revenue. NVIDIA claims that it controls a lion's share of the supercomputing accelerator market -- more than 90%. If that's indeed the case, its data center revenue could increase significantly from the trailing-12-month figure of $5.77 billion in the coming years.

Investors should stick to the stock

NVIDIA dominates the markets it operates in. Just like in the data center space, NVIDIA controls a major share of the discrete PC GPU market with a share of 77% in the third quarter of 2020, according to Jon Peddie Research.

As a result, the company is well-positioned to take advantage of the potential growth in the gaming and data center markets. That's why NVIDIA is expected to clock impressive top- and bottom-line growth in the future as per analyst estimates compiled by Yahoo! Finance, making it a top growth stock that investors should continue holding on to (or even buy more of) in the new year.