This past year has been a tough one for HEXO (NASDAQ:HEXO) shareholders. The pot stock is down more than 40% even though the Horizons Marijuana Life Sciences ETF (OTC:HMLSF) has been fairly stable, falling a relatively modest 4%. The company recently completed a reverse 4-for-1 stock split to stay above the $1 mark and remain compliant with NYSE listing requirements.

HEXO has reported a loss in each of the past four quarters and is coming off an abysmal fiscal year that was full of writedowns, impairment charges, and other ugly expenses. It's a challenging time for the company, and for it to bounce back in 2021, a lot will have to go right. Here are two key things that need to happen for HEXO stock to rally. 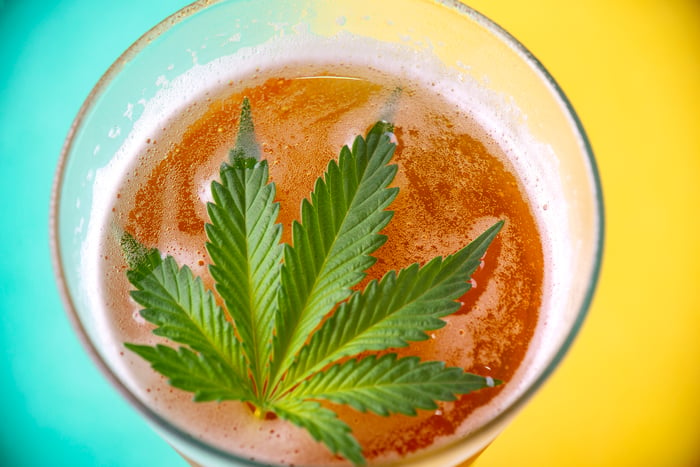 On Dec. 14, Ontario-based HEXO released its first-quarter numbers from 2021 for the period ending Oct. 31, and one of the big positives from those results was its beverage sales. Net sales from adult-use beverages totaled 3.1 million Canadian dollars, which was a 54% improvement from fourth quarter and period ending July 31. The company's net sales from all other segments were CA$26.4 million and grew at a rate of just 5.1% from the previous period.

HEXO's joint venture with Molson Coors, Truss, is now in "the top beverage spot," according to the company. Its key rival in this segment is Canopy Growth (NASDAQ:CGC), which is working with Corona beer maker Constellation Brands on the beverage market. Although Canopy Growth doesn't break out beverage sales specifically, during the period ending Sept. 30, its cannabis 2.0 sales (which include beverages, chocolate, and vape products) totaled CA$8.7 million. Of that total, Canopy Growth says beverage products accounted for 72%, which would put its sales for beverages at approximately CA$6.3 million. While that's higher than HEXO's tally, it covers a slightly different period. However, the important takeaway here is that the beverage segment looks to be a tight battle between HEXO and Canopy Growth.

Winning that battle could not only generate significant growth for HEXO but prove to investors that it can be a leader in the beverage segment, which could help generate some bullishness. Dominating the beverages category could also put HEXO in a great position to sell its products in the U.S. market -- once it's legal to do so.

Minimize impairment and other non-operating losses

Even if HEXO can do well in the beverage market, investors will still want to see a cleaner bottom line. When the company released its Q4 numbers on Oct. 29, they were atrocious and riddled with impairment losses, write downs, and write-offs. HEXO's CA$169.5 million loss was more than six times its net sales of CA$27.1 million. Write-offs and write downs accounted for CA$44.1 million (26%) of the total loss, while a loss related to convertible debentures added another CA$54.3 million (32%) worth of unexpected costs. There were also impairment losses totaling CA$48.4 million (29%). In total, that's CA$146.8 million (87%) worth of expenses outside of HEXO's day-to-day activities that weighed down its numbers during the period.

The positive is that the company's Q1 loss of CA$4.2 million was a fraction of the size. However, just because write downs or other adjustments didn't play a significant factor in the company's Q1 results doesn't mean they won't reappear in future quarters. In HEXO's second-quarter results, for the period ending Jan. 31, 2020, its net loss was CA$298.2 million as impairment expenses of CA$266.3 million dragged down its bottom line.

The amount of noise on HEXO's financial statements that investors saw on the company's recent earnings reports simply isn't helpful in deciphering whether the company had a good quarter or not. And that makes deciding whether to invest in the stock difficult. If HEXO can get closer to breakeven next year while avoiding these types of surprises, it could go a long way to making it a more attractive investment.

Should you buy HEXO stock today?

There's reason to hope that HEXO can bounce back in 2021, but it won't be easy. It's doing well in the beverage market, but the results are still early as the company notes it was just the second quarter that its products were available. Investors are going to want to see a larger sample size before believing that HEXO is truly dominating the market. However, fighting for market share could have a negative impact on its bottom line, which also needs to be better.

HEXO could make for an appealing contrarian buy, especially as its share price continues to fall. But there's still too much risk here for most investors to consider buying the troubled pot stock just yet. HEXO has a lot of work to do in the new year, and it's by no means a guarantee that 2021 will be any better than 2020.