I wonder why there is so much hype around the Canadian pot company Aurora Cannabis (NASDAQ:ACB) when it has time and again failed to meet investors' expectations.

Aurora Cannabis might be a popular pot stock among investors, but if you look around, U.S. cannabis stocks hold much greater potential. One such company is Massachusetts-based Curaleaf Holdings (OTC:CURLF). While most of the Canadian players continued struggling in 2020, Curaleaf had a spectacular year. Aurora's stock dipped 60% over the past year, while Curaleaf's stock has soared 103%. Meanwhile, the industry benchmark, the Horizons Marijuana Life Sciences ETF, is down 4% over the same period.

Curaleaf's revenue grew threefold in all of its quarters this year along with consistent positive earnings before income, taxes, depreciation, and amortization (EBITDA). The company claims to be the largest cannabis company in the U.S., which is evident from its market presence in 23 states. Let's take a look at its progress this year and why it could be a better pick for investors eyeing some long-term gains. 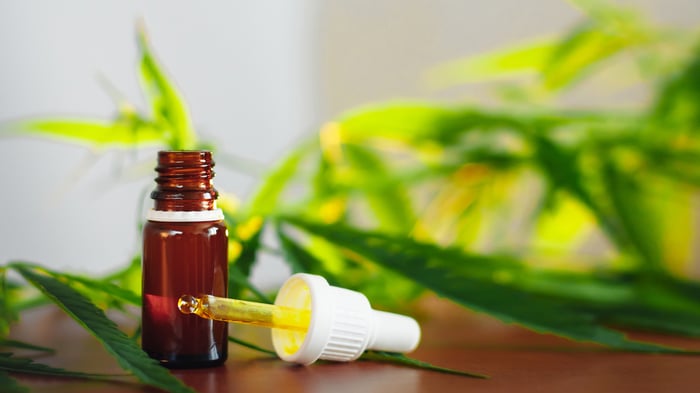 Focusing on expansion has taken it closer to profitability

At the start of the year, when Curaleaf reported its fourth-quarter 2019 financial results, it had only 54 dispensaries across 17 U.S. states. It now has a total of 96 dispensaries across 23 states. Amid the pandemic, when most smaller cannabis companies struggled to survive, Curaleaf was expanding. And all this expansion helped grow its revenue. Curalleaf reported triple-digit revenue growth in all three quarters of fiscal 2020.

In its recent third quarter ended Sept. 30, total revenue grew a stunning 195% year over year to $182.4 million. Both its retail and wholesale segments saw dramatic growth. Retail saw an outstanding jump of 206.5% to $135.3 million, while the wholesale segment sales increased from $6.5 million in the year-ago quarter to $45 million in Q3 2020.

The top-line growth contributed to positive EBITDA again in Q3. The company also saw quite a noticeable jump in EBITDA from $10.4 million in Q3 2019 to $42 million.

Though the company isn't profitable yet, if revenue and EBITDA keep growing at this rate, there is a possibility the company could generate profits by next year. Meanwhile, Aurora Cannabis is far away from profitability. Aurora needs to grow revenue to even dream of making profits in 2021. Its revenue actually sunk 8% year over year to 67.8 million Canadian dollars in its third quarter of 2020 -- not a good sign of things to come.

It kept its balance sheet strong amid the crisis

The importance of capital is especially evident in times of crisis. This pandemic took down many smaller businesses, especially those in nascent industries like cannabis. U.S cannabis companies find it difficult to get financial aid as marijuana is federally illegal, which scares away banks and financial institutions from providing help.

Nevertheless, this $8.4 billion market cap company has positioned itself not only to survive the crisis but thrive post-crisis. Despite focusing on acquisitions and expansions, it made sure to keep its costs down, revenue soaring, and balance sheet strong. Curaleaf ended the third quarter with $84.6 million of cash on hand and $280 million of outstanding debt, net of unamortized debt discounts.

Meanwhile, Aurora Cannabis had a tough time raising cash and handling debts. To make matters worse, its shares kept sliding down and were on the verge of being delisted from the New York Stock Exchange (NYSE). As per NYSE trading compliance rules, a company's shares have to trade above $1 to avoid getting delisted. Aurora had to opt for a reverse stock split to save itself from delisting. However, things haven't improved for the company, as that level of dilution didn't sit well with investors.

Curaleaf is poised for growth

Financially stable, with revenues increasing and profitability close at hand, Curaleaf is in a much better position to capitalize on new market opportunities in the U.S. The company's management is also optimistic about its revenue growth prospects for 2021.

The marijuana industry is an evolving industry poised to grow by a compounded annual growth rate (CAGR) of 18% to reach $73.6 billion by 2027, according to Grand View Research. 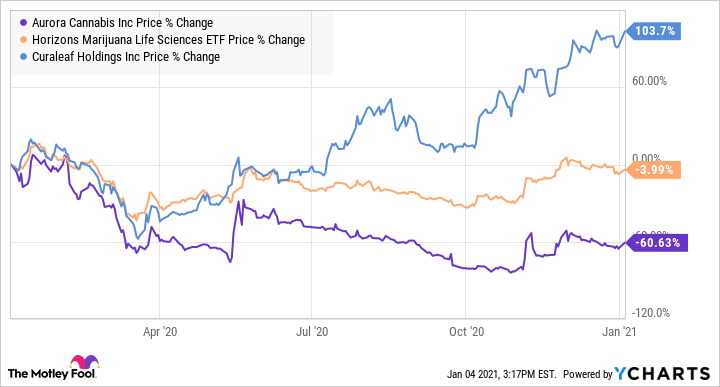 With more states legalizing and the prospect of eventual legalization at the federal level, Curaleaf could dominate the U.S. cannabis industry. I am not surprised that the stock is up 100% this year. At this rate of expansion, the revenues of this cannabis company could go sky high, leading to profitability and ultimately boosting share price over the long term.