Please ensure Javascript is enabled for purposes of website accessibility
Free Article Join Over 1 Million Premium Members And Get More In-Depth Stock Guidance and Research
By Brett Schafer - Jan 5, 2021 at 8:24AM

The park, which will operate as part of Universal Studios Japan, is slated to open this February.

Nintendo ( NTDOY 3.03% ) is known for its sustained success in the video game industry. With timeless characters like Donkey Kong, Mario, and Zelda, the company has been able to ride the boom-and-bust game console cycle for almost four decades. However, over the last five years, Nintendo has announced multiple initiatives to diversify itself away from video games, the largest being a global theme park partnership with Comcast's ( CMCSA 5.59% ) Universal Studios.

The first of its Super Nintendo World parks is set to open this February. Here's what investors need to know about them, and why they should be excited about Nintendo's future. 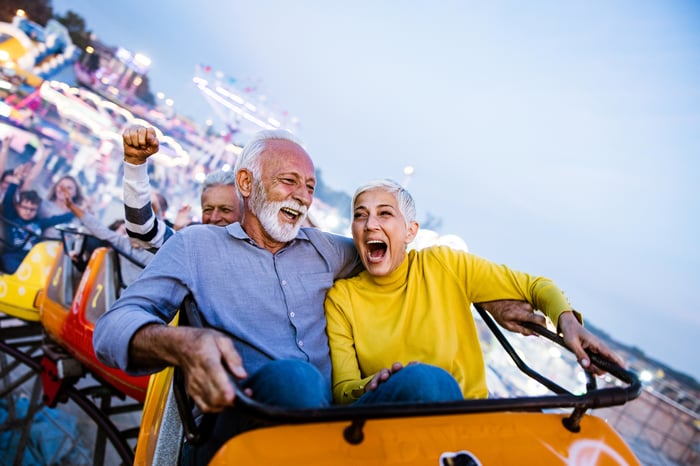 What will be at the park

Universal Studios Japan's Nintendo theme park is slated to open on Feb. 4. (The original plan had been for it to open during the 2020 Olympics, but things got pushed back due to COVID-19.) Mario Kart: Koopa's Challenge will be its flagship attraction. During the five-minute ride, park visitors will wear augmented reality (AR) goggles to enhance the experience as they traverse lava, Bowser's Castle, Rainbow Road, and other famous Mario Kart tracks. But Super Nintendo World will debut with only three main attractions and a few other activities, so for now, it looks like something a family could spend a half-day enjoying before heading to other sections of the larger resort.

Universal is reportedly spending $578 million to make this park come to life. That highlights an important point that investors need to recognize. Since Universal is the one fronting the capital, the deal between the companies will likely see it booking the majority of the revenue earned by Super Nintendo World. However, whatever revenue does flow to Nintendo should come with high profit margins, as it really amounts to licensing its intellectual property for Universal to use. The revenue split has not been made public (at least, not so far as I could discover), and Nintendo is notoriously secretive about its inner workings, so don't expect any color on that topic from management any time soon (or possibly ever). The only way that investors will be able to somewhat track how this deal performs for Nintendo will be to watch the "mobile, IP related" section of its income statement. That's likely where it will classify all future theme park revenues.

Nintendo and Universal also have plans to open Super Nintendo Worlds in Singapore, Hollywood, and Orlando sometime before 2025.

Nintendo -- sometimes to its benefit, sometimes to its detriment -- has historically been a slow-moving company. Don't expect anything different when it comes to these theme parks. A $578 million capital expenditure isn't peanuts, but when you compare it to some of Disney's ( DIS 3.44% ) initiatives (for example, it spent $1 billion on Disneyland's Star Wars attractions, with no building partners), Nintendo is really just dipping its toe in the water. So investors should not expect major profits from this deal to roll in quickly, but should rather view it as a long-term play. Nintendo has enough popular IP to underpin dozens of theme park attractions, but patience will be a virtue here. It also should be noted that, given that Nintendo had over $15 billion in sales over the past year, it takes a lot of money to produce meaningful changes to its income statement.

Don't think of Super Nintendo World as a cash cow for the gaming powerhouse, but as another way for people to interact with its many characters and games, which will hopefully help entrench them in fans' lives. This, in turn, should drive more sales for its core gaming division.

1 Way That Nintendo Is Finally Leveraging Its Valuable Intellectual Property

Is Now a Good Time to Buy Nintendo Stock?

Can Nintendo Stock Make a Turnaround to Close Out 2021?

Down 26% This Year: Is It Time to Buy Nintendo Stock?