Shares of Designer Brands ( DBI -3.66% ) finished up 11% today as part of a broad wave of retail stocks that gained after Democrats reclaimed the Senate last night, winning two elections. After winning the House and the presidency in November, the victory last night means it will be much easier for the Biden administration to implement its agenda.

Among the moves it is expected to make is handing out $2,000 stimulus checks as was recently debated in Congress but blocked by Senate majority leader Mitch McConnell. After last night's results, McConnell will no longer be majority leader.

Designer Brands, which is the parent of DSW, finished the day up 11.1%. The SPDR S&P Retail ETF ( XRT -1.73% ), meanwhile, rose 4.1%, and the small-cap index Russell 2000 gained 4% even as the Nasdaq fell, showing a rotation into recovery stocks, including retailers, on the news. 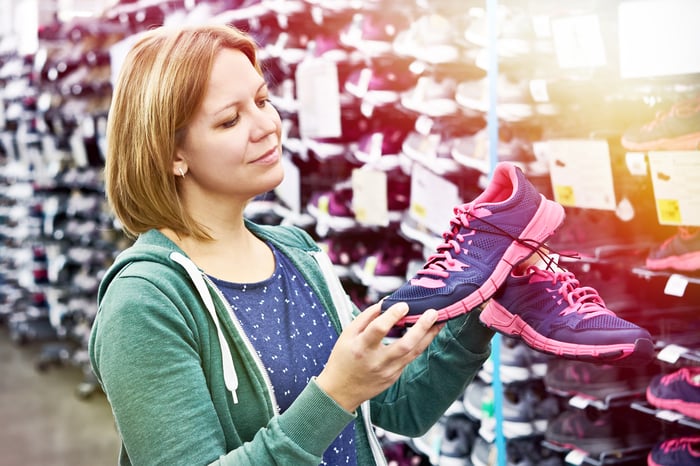 In a terrible year for retailers, Designer Brands was one of the worst performers as the stock finished 2020 down 51%. Shares plunged in March when the country went into lockdown, and never really recovered.

However, the news last night seems to have convinced investors that retailers like Designer Brands will recover faster than they otherwise would, as a number of other beaten-down retailers like Macy's and Gap also rose sharply. In addition to $2,000 stimulus checks, the new government is likely to be more generous with relief spending, including things like enhanced unemployment payments and business loans, which should help encourage consumer spending and speed up the overall recovery once the pandemic ends.

Designer Brands' sales have fallen sharply during the pandemic, and its performance is likely to stay that way until the pandemic ends and consumers feel safe shopping in stores. In its most recent quarter, comparable sales tumbled 30%, and it reported an adjusted net loss of $19 million.

Additionally, its debt has expanded from $190 million last February to $337 million, meaning the company will face elevated interest payments even once business is back to normal. Given that -- and the shift in demand to e-commerce competitors -- it will be difficult for the stock to return to its pre-pandemic levels.