Last year was a tough one for the financial sector in general, but one segment of the sector, fintechs, did relatively well. Financial technology companies like Square and Lemonade were among several that had breakout years.

But not all fintechs outperformed. Some, like Fiserv (NASDAQ:FISV), struggled due to the economic environment and their own internal issues. Fiserv's stock finished 2020 down about 1.5%, its first calendar year with a negative return since 2008. But there are several reasons why this fintech should bounce back strong in 2021. 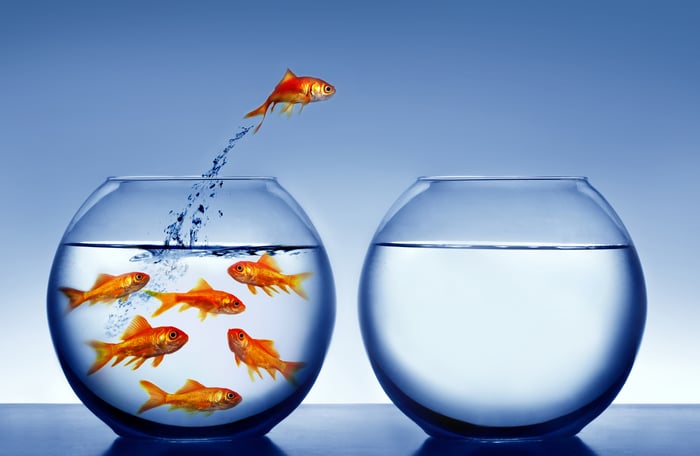 Fiserv is a market leader in moving money

Fiserv produces the technology that banks and institutions use to move money -- providing payment processing, automated clearing house (ACH), digital banking, and card issuer processing, among other services. As such, it is considered the largest core processor in the U.S. Fiserv also facilitates e-commerce and provides point-of-sale solutions for merchants through its subsidiary Clover, which it acquired in a merger with First Data in 2019.

Overall, Fiserv has 1.4 billion accounts on file, 6 million merchant locations, and 100 million digital banking users, and it does more than 12,000 financial transactions per second.

Fiserv's revenue is generated primarily through fee income, which is a great source of revenue because it is not tied to interest rates and it doesn't involve credit risk like other financial firms. But it is subject to the risk of an economic slowdown, as 2020 showed. During the shutdowns and due to the resulting recession, transaction activity slowed, which means revenue and earnings were down.

But that began to change in the third quarter, as the company reported a 21% increase in revenue to $3.7 billion and a 33% increase in net income to $264 million year over year. The growth was led by an increase in its merchant acceptance business, mainly due to growth in payment volume through its Clover platform. Based on the growth, the company expects adjusted earnings per share to increase at least 11% over the previous year.

The company also signed a long-term agreement at the start of the fourth quarter with the fourth-largest card issuer in the U.S., Alliance Data, to process its co-branded and private-label card programs. This follows deals with Genesis Financial and Atlanticus Holdings in July, both of which are top 25 issuers. These agreements should buoy Fiserv's earnings in 2021 as the recession fades and the economy continues to grow.

Acquisition could be a game-changer

The pandemic and recession hampered Fiserv's earnings and stock price in 2020. The last time the company had a negative return for a calendar year was 2008, during the Great Recession. It came out of that down year with a 33% return in 2009, and I wouldn't be surprised to see another bounce-back this year.

The First Data acquisition will provide the company with added scale and complementary services through its merchant and point-of-sale services. It could really be a game-changer for Fiserv. The Clover platform showed unexpectedly high growth last year in a recession, so it should provide a bigger earnings boost as the economy improves.

The savings, along with the company's terrific free cash flow, should allow Fiserv to pay down the massive debt it brought over from First Data. Through the third quarter it had about $20.9 billion in long-term debt, but the company expected to pay down $1.5 billion in 2020 and meet its leverage target in the second half of 2021, CFO Robert Hau said on the third-quarter earnings call. Based on projected consensus earnings growth of 22% in 2021, the stock's high price-to-earnings ratio today should come down into a manageable range.

Fiserv has been an earnings machine over the years, and with its acquisition of First Data, it should widen its moat as a leader in its niche space as a core processor and merchant acquirer. Expect this stock to break out of its slump in 2021.