Please ensure Javascript is enabled for purposes of website accessibility
Free Article Join Over 1 Million Premium Members And Get More In-Depth Stock Guidance and Research
By Jamal Carnette, CFA - Jan 8, 2021 at 8:15AM

Despite already being a $1.6 trillion company, Microsoft has a few tricks up its sleeve to grow even more.

Microsoft ( MSFT -1.97% ) stock has had an amazing run under the leadership of CEO Satya Nadella. Shares of the company are up nearly 500% since Nadella took the reins from Steve Ballmer in February 2014, far outpacing the S&P 500's return of 110% during the same period.

But some investors are beginning to wonder if the stock has run too far too fast, and is now too expensive. That's understandable, as the stock price growth means the company now has a $1.6 trillion market capitalization. Other investors, especially those with a long-term outlook, aren't worried at all and are still confident that the company has a long runway for growth. Let's look at why these investors are more likely to be right. 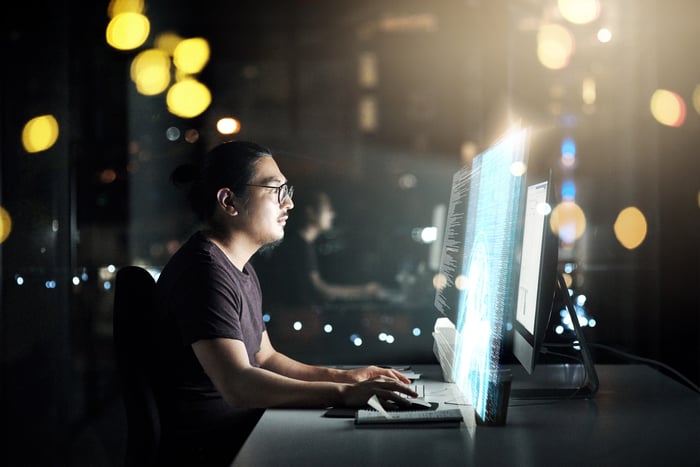 The most consequential move from Nadella when he took over was to reposition Microsoft away from Ballmer's maniacal focus on devices, which led to a disastrous Surface RT rollout and an even more disastrous acquisition of Nokia's smartphone business, to instead become a "mobile-first, cloud-first" company.

As it relates to the mobile-first strategy, Nadella worked to refine the existing Microsoft Office iPhone app and released Office for iPad within months of taking over. Moves like this opened up new markets for its products. An even bigger change involved Nadella championing the transition of Office software from a licensing model to a software-as-a-service (SaaS) model. The new software suite, now named Microsoft 365, allowed for recurring billing and a much more consistent revenue stream of a widely popular product.

This switch is still paying off for the company. In fiscal 2020, Microsoft reported full-year revenue growth in its productivity and business processes segment of 13%, driven by Office Commercial and Consumer subscriptions. Underpinning the shift to a SaaS model is Microsoft's use of its Azure cloud. There's been some recent handwringing about Azure's slowing growth, but the company continues to grow Azure at nearly a 50% clip.

The future continues to look bright for this veteran company. Expansion into artificial intelligence and the Internet of Things (IoT) services and products is only just beginning. The massive amounts of data needed to bring autonomous vehicles, robots, and other devices online will, according to IDC estimates, require 175 zettabytes (each zettabyte is 1 trillion gigabytes) of worldwide data by 2025. The most economical way is to store all this needed data is in the cloud, ensuring growth opportunities for cloud leaders like Microsoft Azure and Amazon Web Services (AWS) for years to come.

After starting out in a distant second place in terms of marketplace share, Microsoft Azure has continued to narrow AWS' lead in cloud computing, mostly on account of its stronger full-stack offering from the base infrastructure-as-a-service (Iaas) level to the end-user facing SaaS product. This advantage is important because AI will require more than just storage. Cloud providers that are able to offer a complete set of business intelligence and data analytics tools will continue to win share in this sector.

Microsoft is pricey, but still a buy

The biggest argument against buying Microsoft stock at the moment is valuation-based. Valuations across the board, but particularly in tech, have been stretched because of a rush to invest in the stock market brought on by near-zero interest rates. Currently, Microsoft trades at 35 times earnings, which is on the high end of its 10-year historical valuation.

Despite that high valuation, Microsoft is not all that expensive when compared to the overall market. The S&P 500 currently trades at 38.3 times earnings and hasn't produced nearly as much stock price growth (on average). The S&P 500 as a whole is also posting negative top-line growth rates right now; Microsoft is expected to grow its already massive top line by approximately 10% in the current fiscal year. Don't fear Microsoft's massive market capitalization; the company has the elements needed to continue posting top- and bottom-line growth for years to come.