Nonetheless, investors anticipated slightly higher revenue than Bed Bath & Beyond booked in the third quarter: Shares lost 11% on Jan. 7 in the trading session following the release.

Let's review the company's financial scorecard in the larger context of its attempt to regain sustained growth. 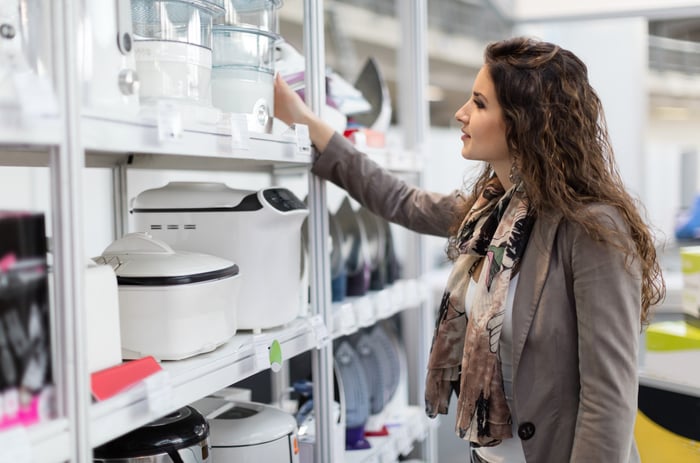 Bed Bath & Beyond's sales decreased by 5% year over year from $2.76 billion to $2.6 billion. Investors had expected a sales dip, given that the company has sold off five of its brands this fiscal year as a part of its turnaround strategy, leaving four core brands -- Bed Bath & Beyond, buybuy BABY, Decorist, and Harmon Face Values. Yet analysts as a group anticipated $2.75 billion in revenue, which precipitated investor selling.

The company's same-store sales, also known as comparable sales, increased by 2% year over year, led by its core Bed Bath & Beyond (BBB) brand, which posted comps of 5%. This was the second consecutive quarter that the organization managed positive comps performance. The overall 2% increase reflected a trend seen in the larger retail space during the COVID-19 pandemic: In-store comparable sales dropped 15%, but these were offset by BBB's digital sales, which soared 77% year over year. Digital sales made up 36% of total revenue in the third quarter.

Gross margin improved by 340 basis points to 36.5%, which management attributed in large part to controlling promotions and discounts, which has been a priority of CEO Mark Tritton since he took over the helm in November 2019. After adjusting for a loss on the sale of non-core brands and businesses, the company generated a slight operating loss of roughly $9 million during the quarter. As for the bottom line, BBB lost $0.61 per diluted share, versus $0.31 in the prior-year quarter. The greater per-share loss stemmed from the loss on the sale of brands and businesses, as well as non-cash impairment charges.

Despite the red ink, the company generated $43.5 million in operating cash flow over the past three months. After subtracting capital expenditures of $38 million, it was left with $5.5 million in free cash flow. The sale of businesses during the quarter netted $238 million; management directed all but $11 million of these cash proceeds to share repurchases. BBB ended the quarter in decent financial shape, with working capital of $1.3 billion on its books, which is slightly higher than its outstanding long-term debt of $1.2 billion.

With one quarter remaining in its fiscal 2020 year, BBB provided an update to its outlook for fiscal 2021. The company raised its adjusted EBITDA outlook for the upcoming year from $500 million to a range of $500 million to $525 million. The company also increased its current share repurchase authorization from $675 million to $825 million. Management stated that the organization will have completed the repurchase of $375 million in shares by the end of the current fiscal year.

While it may seem odd for a company in turnaround to be allocating such a huge amount of capital to buying back its own shares, BBB is essentially returning the money it's generating from the sale of non-core brands back to shareholders. The company has already realized roughly $600 million in proceeds from the sale of these brands in the current fiscal year.

As investors look forward, perhaps the most vital execution point for management is to steadily reduce underperforming stores. The company ended fiscal 2019 with 1,500 stores, of which 976 were BBB-branded locations. By the end of fiscal 2020, management forecasts that it will have closed 120 of these units, on the way to shuttering approximately 200 BBB stores by the end of fiscal 2021. As it tightens up profitability, the reduction of its retail footprint should provide Bed Bath & Beyond with a meaningful lever to boost economic returns -- an essential precondition to stock price appreciation in the coming quarters.