Amazon (NASDAQ:AMZN) and Ulta Beauty (NASDAQ:ULTA) have both been resilient retailers over the past decade. Amazon, often cited as a root cause of the retail apocalypse, expanded its e-commerce marketplaces and locked more shoppers into its Prime ecosystem. Ulta expanded its beauty stores aggressively across the U.S., while drawing in shoppers with its in-store salons. 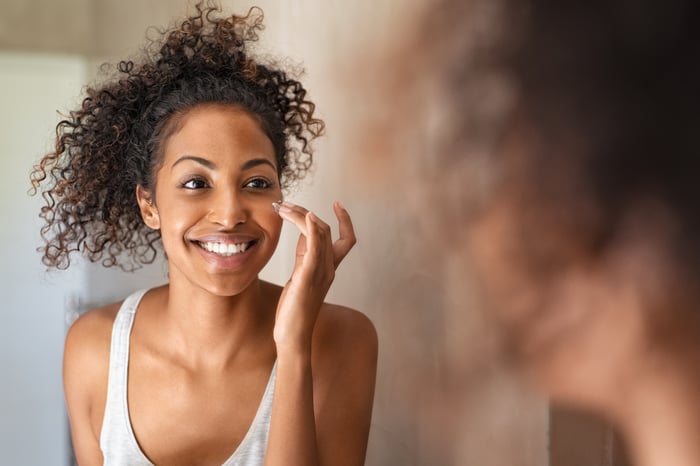 Amazon's stock has risen more than 65% over the past 12 months as the pandemic caused more shoppers to buy products online. The elevated usage of online services also buoyed the growth of its cloud platform Amazon Web Services (AWS).

Ulta's stock advanced 12% during that period, even as store closures throttled its comparable store sales growth throughout the pandemic and stay-at-home measures reduced demand for beauty products. However, Ulta's business has been recovering gradually, and its sales could rebound after the crisis finally ends.

Should investors stick with Amazon this year, or should they take a chance on Ulta Beauty's eventual recovery? Let's take a closer look at both companies to find out.

Amazon generates most of its revenue from its online marketplaces, but most of its profits come from AWS, the world's largest cloud infrastructure platform. The growth of AWS' high-margin business enables Amazon to expand its lower-margin e-commerce business with aggressive discounts, cheap hardware devices, and new perks for Prime members.

Amazon's revenue and earnings per share rose 20% and 14%, respectively, in 2019. In the first nine months of 2020, its revenue grew another 35% year over year as its EPS surged 68%. It partly attributed that acceleration to pandemic-related tailwinds. Analysts expect its revenue and EPS to increase 36% and 52%, respectively, for the full year.

For 2021, analysts expect Amazon's revenue and EPS to rise 18% and 30%, respectively, as it will face tougher year-over-year comparisons after the pandemic passes. That slowdown isn't surprising, but its stock remains reasonably valued at 70 times forward earnings.

Ulta's business could recover next year

But in the first nine months of fiscal 2020, Ulta's comps plummeted 24%, its revenue fell 22% year over year, and its adjusted EPS plunged 85%. Those declines look horrendous, but most of the damage occurred during the first half of the year:

Ulta temporarily closed all its stores in mid-March, but it rolled out curbside pickup the following month and reopened all of its locations by the end of July. It also continued expanding its retail footprint throughout the crisis, ending the third quarter with 1,262 stores -- up from 1,241 locations a year earlier. Ulta also recently partnered with Target to add "shop-in-shops" to over 100 Target locations and its online store.

Ulta didn't provide any guidance last quarter, but analysts estimate that its revenue and EPS will decline 19% and 73%, respectively, for the full year. But next year, they expect its revenue to rise 22% and its earnings to more than triple as the pandemic passes. Based on those estimates, Ulta's stock still looks reasonably cheap at 28 times forward earnings.

But will the pandemic actually pass?

Unfortunately, investors should always take analysts' forecasts with a grain of salt. No one can be sure when this unpredictable pandemic will end. If it drags on throughout 2021 and people are reluctant to take the vaccines, Amazon could easily crush Wall Street's estimates again.

Meanwhile, Ulta, which only operates in the United States, could be forced to close its stores again. Its new partnership with Target, which kept its stores open throughout the pandemic, might cushion that blow. On the other hand, it will face fresh competition from LVMH's Sephora, which recently partnered with Kohl's to pivot away from J.C. Penney's struggling stores.

It's also tough to recommend Ulta when other well-run brick-and-mortar retailers, including Target and Best Buy, generated positive growth throughout the crisis and still trade at lower P/E ratios.

If you're optimistic about the pandemic ending quickly, Ulta might be a more appealing investment than Amazon. Personally, I don't think the crisis will end soon. Moreover, I expect the secular acceleration in e-commerce and cloud services to persist throughout the rest of 2021. Therefore, I'm sticking with Amazon until the pandemic truly ends and Ulta starts growing again.