For the past three years, shares of Canadian pot grower Tilray (NASDAQ:TLRY) have fluctuated wildly. The stock reached as high as $300 in October 2018 after its initial public offering in July of that year at a mere $17 per share. After excessive speculation and euphoria, however, the stock price subsequently collapsed by nearly 95%.

It may be a surprise to many investors that Tilray is about to become the biggest marijuana company in the world by revenue as part of a merger with Aphria (NASDAQ:APHA), a leading marijuana grower based in Canada. Under the agreement, Aphria shareholders will control 62% of the combined company, with Tilray shareholders owning the remaining 38%. Aphria will also cease using its trade name for its cannabis and do business under the Tilray name.

Can this megamerger be the catalyst Tilray needs for its share price to return to higher levels? Let's find out. 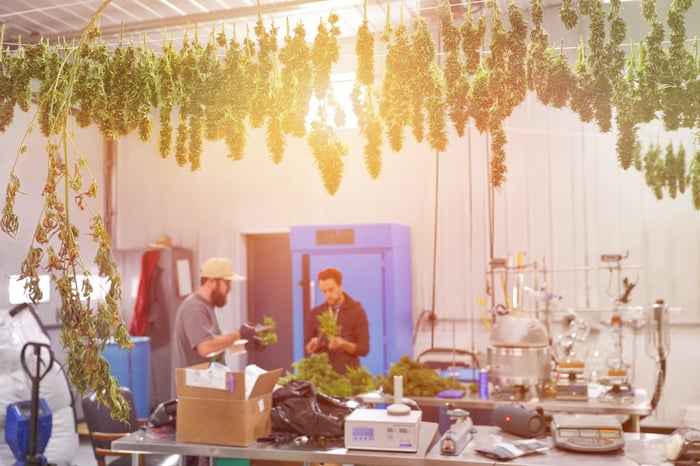 Combined revenue for Aphria, Tilray, and their subsidiaries totaled 874 million Canadian dollars over the past 12 months. That means the combined company takes the No. 1 place in the world for cannabis sales. Previously, Curaleaf (CNSX:CURA) (OTC:CURLF) held this title with CA$842 million in annual revenue.

In their most recent fiscal quarters, Aphria grew its sales by 15.5% year over year while Tilray's growth stalled. However, without the effects of the one-time termination of a bulk supply agreement, Tilray's revenue would have appreciated by 25% over the same period last year.

It's important to remember that 1 plus 1 does not equal 2 when companies merge. Sometimes, the result is unimpressive or inefficient -- but sometimes, the two businesses create synergies by streamlining their production facilities and letting go of excess corporate staff. After this deal closes, Aphria and Tilray expect their cost savings could reach higher than CA$100 million over the next two years.

That's fantastic news, as it would accelerate the timeline for both Aphria and Tilray to establish positive profit margins. Currently, Aphria brings in about CA$18.5 million per quarter in earnings before interest, taxation, depreciation, and amortiation (EBITDA), which is a substantial improvement from just $0.2 million per quarter about a year ago. As for Tilray, it is roughly breaking even in terms of adjusted EBITDA as of the third quarter of 2020. Via the deal, the company expects to bring its production cost below CA$1 per gram of dried cannabis.

What's more, the new Tilray will have access to a complete portfolio of cannabis products thanks to the merger. These include flowers, vapes, pre-rolls, oils, capsules, edibles, medical marijuana, CBD (cannabidiol), and beverages. The combined company will have a massive 17.3% market share in Canada's CA$3.1 billion legal cannabis market. In addition, the new Tilray will be able to tackle a $19.6 billion pot-market opportunity in the U.S. as it expands down south.

Last November, Aphria paid $300 million to acquire SweetWater Brewing LLC. SweetWater is an American craft-beer brewer that sells its beverages in 40,000 locations across 27 states. Its line of "420" brand drinks (which contain no cannabis but do feature terpenes and flavor profiles inspired by cannabis) is currently the most popular craft beer line in the U.S. The company brings in about $66.6 million per year in revenue.

The contribution to U.S. expansion isn't just coming from Aphria. In 2018, Tilray acquired CBD company Manitoba Harvest, which sells its cannabidiol products in 17,000 retail locations across North America. That year, the subsidiary brought CA$94 million in sales and posted a profit.

If that's not enough, the combined entity will also have outreach beyond North America. For example, Aphria subsidiary CC Pharma distributes medical cannabis to more than 13,000 pharmacies across Germany. CC Pharma contributes CA$79.6 million per quarter, or more than 50% of Aphria's sales. By 2025, the value of Germany's medical cannabis market will likely surpass $1 billion.

As of now, it seems the new company will be conservatively leveraged, with CA$579 million in cash and CA$1 billion in debt. Despite its significant growth potential, the sales multiple for the combined companies is just 6.2. As the new Tilray begins to expand outside Canada while simultaneously realizing cost synergies, I expect it to start posting solid profits in no time. For these reasons, I'd advise marijuana investors to add Tilray to their portfolios if they haven't already.