Shares of Designer Brands (NYSE:DBI) were moving higher even as the broader market pulled back today. A better-than-expected preliminary report from fellow footwear retailer Genesco (NYSE:GCO) seemed to lift shares of the DSW parent today. 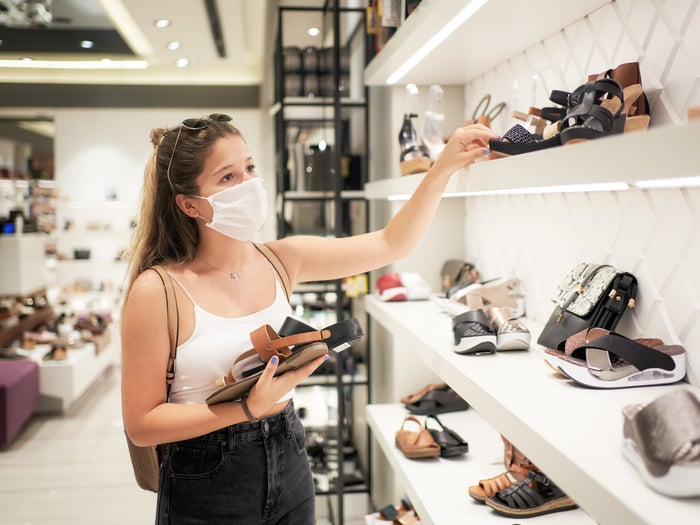 Ahead of its presentation at the ICR Conference today, Genesco reported that its total comparable sales were down 3% across its three footwear brands -- Journeys, Schuh, and Johnston & Murphy -- for the eight weeks up to Dec. 26. In-store sales comps fell 14% in the quarter due to the impact of the pandemic, but digital sales rose 49%, nearly offsetting the pressure on brick-and-mortar sales. Total sales in the period were down 8%, a reflection of some stores being closed because of the pandemic.

Genesco CEO Mimi Vaughn called the performance "very encouraging," saying sales were ahead of expectations. She also said comps had turned positive in January, showing that footwear retail continues to recover from the depths of the crisis.

CL King analyst Steven Marotta chimed in to say that Genesco comps were better than estimates and said he viewed the report bullishly. Last Friday, Marotta called Designer Brands a top pick for 2021, saying he's optimistic that the pandemic will have faded sufficiently by the second half of the year in time for the back-to-school season, and that investors should capitalize on the stock trading near historic lows. Today's jump comes after another double-digit gain last week.

Designer Brands and Genesco are responsive to similar macro trends, so it's not surprising to see the DSW parent bouncing on today's news as it bodes well for its own fourth-quarter earnings report. The company has certainly struggled during the pandemic as sales were down 30% in the third quarter, but those challenges are priced into the retail stock, considering shares are down 44% year to date. As Marotta noted, there is certainly plenty of upside if the business normalizes by the end of the year.