Altria Group (NYSE:MO), one of the oldest companies in America, also pays out one of the largest dividends. Shares of the tobacco maker yield 8.3% at Monday's prices, which should entice investors looking for stocks that pay out a steady stream of income. However, plenty of smart investors are worried that because of historic headwinds with tobacco use, Altria's dividend is too good to be true.

While many stocks with yields close to 10% can end up being a trap for income-seeking investors, I don't think that will be the case with Altria Group. Here's why. 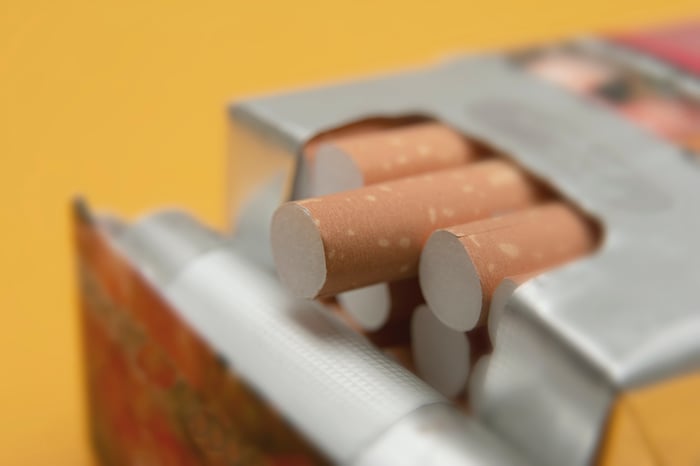 Tobacco is a centuries-old, stable industry

Altria Group in its current form can be traced back to 2008, when it spun off Philip Morris International (NYSE:PM). However, its roots as a tobacco maker trace back to 1902 and the incorporation of Philip Morris & Co., Ltd. Philip Morris USA (the main subsidiary under Altria Group), with its Marlboro cigarettes, has been an industry giant for much of the last 120 years.

Tobacco use in the U.S. has been declining for decades, ever since the surgeon general issued a warning on smoking and health in 1964. In fact, since the report came out, cigarette use by adults in the U.S. has dropped by two-thirds to 13.7%. But during this timespan, Altria Group has grown its earnings power tremendously.

How is this possible? Two words: pricing power. Altria Group has been able to consistently raise the price of a pack of cigarettes to offset declining unit sales and rising excise taxes.

While Altria's revenue only grew from $24.6 billion to $25.1 billion from 2012-2019, its operating cash flow grew from $3.9 billion to $7.8 billion. This allowed the company to almost double its annual dividend payout from $1.68 to $3.25 per share during that same time frame. Last summer, the company raised its dividend payout yet again, with the annualized payout now sitting at $3.44 per share. Even in one of the worst recessions in modern history, people are still lining up to buy tobacco products.

But what about competition? Unlike other consumer staples, tobacco companies like Altria are banned from advertising their products. This makes it quite difficult for competitors to gain market share, but it can be a blessing for companies like Altria that already have it. It not only saves them from having to spend money on marketing but establishes a government-built moat around the business.

Is there a scenario in which the dividend gets cut?

Altria Group has a lot of debt on its balance sheet -- $29.3 billion, to be exact. If there would be any reason for Altria to cut its dividend, the repayment of this debt could be the culprit. However, if you look at Altria's debt schedule, you can see that from now until 2030 it will have to pay no more than $3 billion in a single year, with most years closer to $1 billion. With such a reliable business generating billions in cash flow each year, it doesn't seem likely that Altria's debt burden will hurt the dividend anytime soon.

Everyone doesn't have to invest in tobacco companies, and a lot of people aren't comfortable doing it. But if you are someone looking for an income investment with a high dividend yield, I don't think you can go wrong with Altria Group.